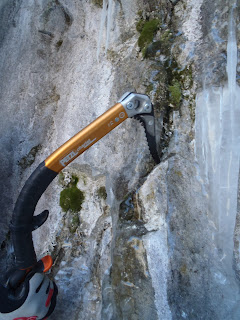 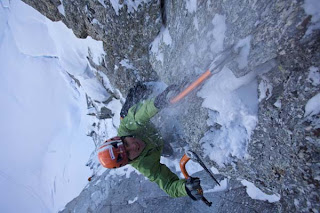 
The original Ergo was one of the new tools that started the mixed tool explosion. That was several generations ago now and it is obvious that dbl handled tools are here to stay. Once thought an esoteric in design and for the specialists only it became a pretty common place design along with the BD Reactor and other newer tools from a few companies playing catch up. 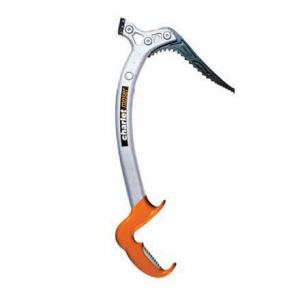 Then the Nomic came out. Even more radical in design and appearance it didn't take long for almost everyone to realise just how good the Nomic was and how much easier it made ice and mixed climbing. The radical shaft shape and lack of hammer didn't stop the Nomic users from getting on everything from easy alpine ice to hard M8 all with the same tool. And amazingly almost everyone happy with it!

The newest Ergo is another big jump in shaft and handle design. You now have an extremely high clearance shaft and the option of three supported hand positions.


To be honest I am still learning how to climb on a Nomic after 5 seasons and figure I have yet to fulfill its potential.

The new Ergo is a big step up on the Nomic's potential from what I first see, visualise and can act upon even now.

Another look at the new Ergo here with good pictures:

More here from someone who can actually use the new Ergo as intended: 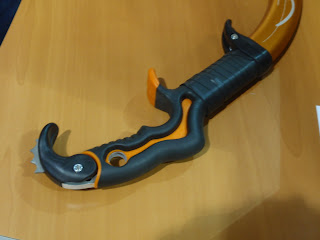 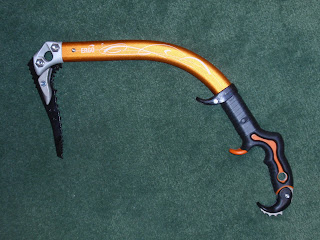 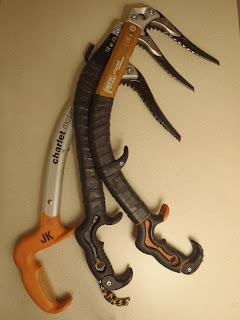 For what it is worth the Ergo is an amazing piece of kit even for a beginner on mixed.  Easy or hard terrain and with no concern for your climbing ability imo the Ergo is a rather big step up in performance over every previous ice tool I have used.  There is little question it really excels on vertical terrain, mixed or ice.  But you can just as easily climb Grade 3 water ice with the Ergo as you can with an original Quark or a Nomic for that matter.  The more horizontal grip of the Ergo really has a grip strength advantage over even the Nomic'c excellent grip profile.  Enough so that the Ergo's grip kept me on a climb that I should have and would have blown off an Nomic's grip when I popped both feet trying to get on an icicle while coming off mixed terrain.
The new grip angle is a big advantage on difficult terrain and doesn't seem to have any down sides or easy terrian that I can tell.  It is easy enough to move your hands up the shaft as the terrian looses angle.  The other big advanatge I see form the previous generation of Nomics is the serrated lower grip pommel.  The serrated steel blade really does offer good bite on the ice and makes the tool much more stable.   More so than I ever thought it would.   Big plus here.    Down side is the Nomic and Ergos pommel attachment  design is seriously flawed and is prone to quick failure.    Which makes the tool pretty worthless.
I really like this tool.  Much more so than I had ever envisioned.   It works very well on any mixed or pure ice terrain.  Even the easy stuff and is exceptional on the vertical  stuff.   I can see this being the only tool many climbers will own and they will be satisfied by doing so. The only down side from a huge positive recommendation for a beginner wanting to climb harder and get better, to the proficient hard core mixed master, is the poor pommel design that Petzl is obviously going to have to fix sooner than later.
But there is enough advantages to the new shaft design that I am going to figure out a away to make my set of Ergos reliable enough to take onto some serious alpine mixed terrain.
(see the other post for the details on the Nomic Ergo "failures")
Posted by Dane at 3:40 PM

Thanks for the review, Dane. What would you say is different about the swing needed to get the Ergo to stick in ice compared to swinging, say, a Quark, or even a Nomic? I caught this video (link below) a couple weeks back, and while not in English, at the 3:00 mark he starts reviewing the Ergo and the guy clearly has troubles getting a good stick with it. I'm guessing it just requires a different swing and that he just hasn't nailed it yet, so wanted to get your impressions on the matter. http://www.youtube.com/watch?v=FzTlFhLTukI

All this on really hard cold ice. Surprizingly I found a set of the original Quarks with hammers easier to climb with in those conditions. It was all about the added weight.

I really think you could give a Ergo to a total newbee on ice of any grade and they would excel quickly with little fanfare.

The Ergo on the video has a new Rock pick the other two tools have the Ice pick. The Quark also has weights and the hammer installed. All the weight on the Quark is why I would bet it seems to place easier in the ice they have.

I think the deal is...forget about how they look and just climb with them. I didn't change my swing with the Ergo and used all the handle positions. Guys had said the second grip would be better on moderate terrain. I found the multiple handles worked great and made matching much easier. But the bottom handle was where i typically found it much easier to swing the tool from....just like the Nomic.

I started ice climbing this winter and I fell in love. I really want to start dry tooling here in Boston this summer to stay active. My goal is mountaineering this coming winter but I don't want to buy two sets of axes. Can I do mountaineering with Ergo? Will they work on snow (i.e. holding the heads and punching in on steep snow angles?) My only concern is that the Petzl website listed (iceclimbing/drytool//mountaineering) for the nomic but just (drytool/iceclimbing) for ergo

My take from using both the Nomic and the new Ergo is the Ergo will do every thing the Nomic will do and even more. Both are an aquired taste for general mountaineering. Neither are very good there but both will work.

Thanks for the quick response. So what should I do? lol... I'm so stuck. Quark, Nomic, or Ergo?

Do I have a subpar mountaineering tools or subpar climbing tools...

Here's where I'm comin from...

I'm in Boston. I started mountaineering in the Whites this winter and fell in love with all of it. (ice climbing, camping, summiting). So now its summer and I started rock climbing because I didn't want to stop training for next winter. Although rock climbing is fun, unfortunately its ice climbing that I'm really in love with. So my girl and I heard about dry tooling and we took some cheap Camp ice tools down to the quarry and I had a lot of fun. We were just cragging with climbing shoes and axes (i guess that's drytooling). We didn't wear our Petzl sarken because we thought they'd get ruined on the rocks. One serious problem I had was that I bashed up my fingers bad almost every run and I kept slipping down the tool handles. I'm hoping a more legitimate tool will help clear that problem up. I can't imagine people regularly climb with this level of pain.

These are the axes we were using: http://www.backcountry.com/images/items/medium/CMP/CMP0175/ONECOL.jpg

Will we see a big enough difference with the Quark or should we go for the Ergo or maybe the Nomic?

Two more quick things... are we supposed to be wearing gloves while dry tooling in the summer? Also, is using dry-tools and climbing shoes stupid? Have you heard of people doing that? Or should we use crampons? Won't our crampons be garbage by winter time?

Thanks so much Dane!!! I find with any pursuit, it's a rare gem when you find an expert that's willing to help a newbie.

Difference in tools? Yes big difference between a proper two handed tool (Fusion/Nomic/Ergo) and what you were using.

I own all three Petzl tool choices among other tools. If I was just going to have one pair..tough choice but it would be the Ergo. Too many advantages, few disadvantages. You can see the stuff I climb here on the blog...and it isn't WI6 or M7 o na regular basis. If forced I would use the Ergo everywhere. And did for most of the winter. Second up would be the Nomic but they won't be available again till Fall of 2011.

Depends if you are in a hurry. Ergos can still be found if you look around.

Gloves? Yes lwt leather gloves are great for dry tooling. Tools and gloves should eliminate any injuries and pain...just watch the flying tools! Shoes? Pretty common for the warm weather to use rock shoes. In France it was the norm on the dry tool crags to wear rock shoes even when it is cold as long as the rock is dry.

Thanks so much. I will get the Ergos. I guess I can get used to using them in Alpine snow too. I also have a Black Diamond Raven mountaineering axe, so worst case I'll take all 3.

I'm ganna check backcountry. Hope I don't end up with the defected ones.

Don't worry, Petzl will fix them, over night, if you do.

Thanks for the thoughts Dane. Your article, and some swinging at a demo, convinced me to go with the Ergo as my first set of tools.

Some field testing results to back up your statement about these being good beginner tools:
I'm a gumby when it comes to ice, and while I'm working on fixing that, I feel that the Ergo will help greatly along the way. Sticks are easy to get and the orientation of the handle, more like a pullup bar, eases pump and lets me move my hand around into different positions while hanging. This gives me more time to work on proper foot and tool placements without pumping out. I've let a bunch of my other ice gumby friends try them and they really are a hit. Most of the beginners felt that they were easier to climb with than the other tools we had (viper/cobra and quarks).

Thanks again for your impressions and reviews. I've learned a lot through reading your blog and hope to see you out on the ice sometime!

I have now recieved the Ergo axe, and like you said, it is easy to swing! Even on really easy ice! I notice the pick-angle is actually almost the same as on my quarks, so it doesn't feel like i am hitting the ice with the top of the pick instead of the tip, like it felt on the BD Fusion.

It is a truly amazing axe, and it was better than i have hoped to imagine! I just have to say thanks for being so "persuasive" on your blog about the Ergos. That is why i went with the Ergos instead of the Nomics, and i am really happy about my choice!