Petzl issues a statement on the New Nomic and Ergos 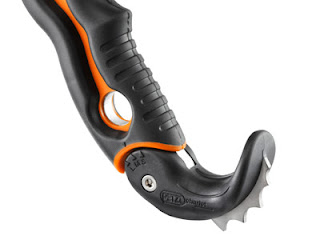 copy and paste the URL below for full details:

As it was pointed out quickly to me this morning Petzl has not issued a recall.  Nor is this a safety issue. (in my opinion and Petzl's)  But call it what you will, Petzl will fix the faulty tool pommels in the short term and replace them with a new version once they are available in the fall of 2011.

Bravo to Petzl! for doing the right thing and doing it as quickly as possible. This response is less than a week after seeing the first pair of damaged tools.

Petzl is also setting up a very quick return  and repair program (one day turn around in Utah after Jan 1st) for any effected tools.  Call your local Petzl rep for the details.   The fix is an additional  pin through the handle.  Petzl  will have a team on site at the Ouray Ice Fest adding the pin and extra pommel support to anyone with the newest tools.  How cool is that?

What follows is the text of their message.

It has come to our attention that the adjustment system of the GRIPREST (the lower hand rest at the bottom of the handle) on the 2010 NOMIC (U21 2) and ERGO (U22) in some cases may not stay fixed in the desired size position.

This issue concerns NOMIC and ERGO ice tools with serial numbers between 10208 and 10329 and all GRIPREST (U21 GR2)
accessory parts. It does not concern the new QUARKs or the older versions of the NOMICs, QUARKs and QUARK ERGOs.

Following conversations with end users and extensive lab testing, we have determined that this problem can occur when an inward force is applied to the GRIPREST, damaging the adjustment teeth at the base of the tool's handle that mesh with the GRIPREST (see photo). Once this damage occurs, users may lose the ability to fix the GRIPREST in the desired size position.

Petzl has developed a solution to reinforce the GRIPREST, which permanently fixes it in the position of your choice (S, M, or L). This procedure will be expedited to reduce any interruption to your climbing season. Because this solution eliminates the ability to adjust the grip's size, we will replace your tools with redesigned versions of the NOMIC or ERGO once they are available in autumn 2011.

Warranty procedure
Anyone with a damaged NOMIC or ERGO or who has concerns about the durability of the GRIPREST adjustment system, is encouraged to contact the Petzl distributor in their country or return the tools to the store from which they were purchased for further information about the warranty procedure. You will be provided with directions on what to do next, as well as an
estimated time to modify your tools and have them returned to you.

We would like to thank the climbers that alerted us to this issue.

We sincerely apologize for any inconvenience this may cause you,
Paul Petzl (President), Romain Lécot (General Manager) and the entire Petzl team"
Posted by Dane at 8:51 AM

I wouldn't call this a recall. They are not recalling anything in fact.

Call it what you like or call it nothing at all....Petzl will fix the tools short term and replace them with a new design when it is available.

Petzl has done an outstanding job! Thanks guys!

Saw it suggested on another blog and forum that this only involves 121 tools total. Wish it were so but it is not. Pays to check your sources on the Internet.

From Petzl press release, "This issue concerns NOMIC and ERGO ice tools with serial numbers between 10208 and 10329".

The Ergo Serial number PREFIX (production run?) is #10XX6 KM. The Nomics are similar. Obviously in the return catagory numbers.

The second numbers are actual serial numbers @ #3XX3 and #3XX4 on my Ergos. My Nomic skip one number between them #2XX2 and #2XX4. Seems obvious it is more than simply 121 tools that will need to be repaired and placed.

How does this affect current shipments of tools? I'm waiting on a pair thats supposed to be in Canada in January/February. Will these tools just not be delivered?

That is my impression. I was told the new tools in Utah are going back to France asap.

I'm obviously not Petzl but was told that no new Nomic's or Ergos would be sold and eveything in stock with Petzl (world wide) will be returned to France and the issue resolved before any of the new Nomics or Ergos are released again. (Petzl estimates Fall of 2011 in their press release)

Please don't take that as gospel as I am just repeating what I have been told. Things have changed several times in just the last week so who knows what will happen next week!

Unrelated to this article. I in a post somewhere about a tape you buy from Home Depot or something for an upper grip. Couldn't find where I read that..... Could you give me the name of it? Thanks!

I think it's funny how some of you praise Petzl for this. It was a f-up in R&D / QC, and what they did is absolutely the minimum they should do, not something like "wow, thanks Petzl!!". Faulty products should be fixed, of course, it's not a question of "if". I think the approach they take (a fix now and new axes later) is a good one, and that's appreciated surely, but still makes me wonder of their quality control a bit. I've got Nomics, and there's no real competition for those in the market currently, so I have no plans switching over to another brand, regardless of this incident.

Not sure how to take your comment. On one end you praise Petzl's tools yourself. On the other you say they don't deserve a comment for doing the right thing.
Daniel and I had the first faulty tools Petzl had seen. They were replaced and we had tools to climb with again before Petzl even had the faulty tools in hand.

Better yet Petzl France had a world wide program set up and a solution published in less than a week after get the tools back in France.

My take is Petzl did screw up...but they have done an awesome job of fixing it, short term and long term to my compete satisfaction.

My take on this incident is that it was a design error that shouldn't have got out of the factory. Hence I said I feel it's odd to salute Petzl for taking the corrective actions (whatever they are, and however costly they'll become - it's business nevertheless, not charity work they're doing :)).

I understand you are happy having got replacement axes for the failed ones immediately, but also do realize it's not as simple for all of us - having worn out the teeth almost to the breaking point, and no Nomic stocks available anymore in the local stores for a replacement (all have been pulled away from the store shelves - call it a recall or whatnot, they're gone), I am stuck with the fix (that takes away an important feature of the axe) WHEN it's available (I hope my axes won't fail before they're out, to not have have a mandatory break in middle of the season).

I do hope the V3 will bring again a solid axe into our hands, with Petzl hopefully addressing the poor umbilical attachment point at the same go.

The fact that I love the Nomics, and wouldn't trade them for anything is not contradicting with the above - there's no competition in my eyes, so my role will be to faithfully (but unhappy to certain extent) wait Petzl to come up with the fixes, and to survive the season with minimal negative impact) :)

Fair enough. My tools have been "fixed" as well. But glad they are new tools. I have never found the adjustments in the pommel all that useful. Just another perspective. I work in design and on ice tools specifically at times so I am aware of many of the design issues on the Petzl tools. Umbilicals and the new pommel aren't the only ones. And we do agree, they shouldn't have gotten as far as they did. Working on some of those issues right now. Hard to believe the same company that brought us the Nomic could make such a mess of Gen 2 tools.

If you think the Nomic is a good tool you should try the Ergo..it does evething better imo.

I'm climbing for a week on the Pakway in cold conditions and the Ergo really shines in every condition I've used it in.

Ergo - I managed to see (and swing it in the air) in a Petzl demo desk a while back, and indeed it felt better than it looks :) (if that makes sense). Nomics are my only pair for all tasks (incl. easy alpine), but if I ever get any good at climbing hard ice/mixed routes, will surely consider Ergo. But seeing my current devolopment rate, it will take until V4-5 of the Ergos until that happens :D