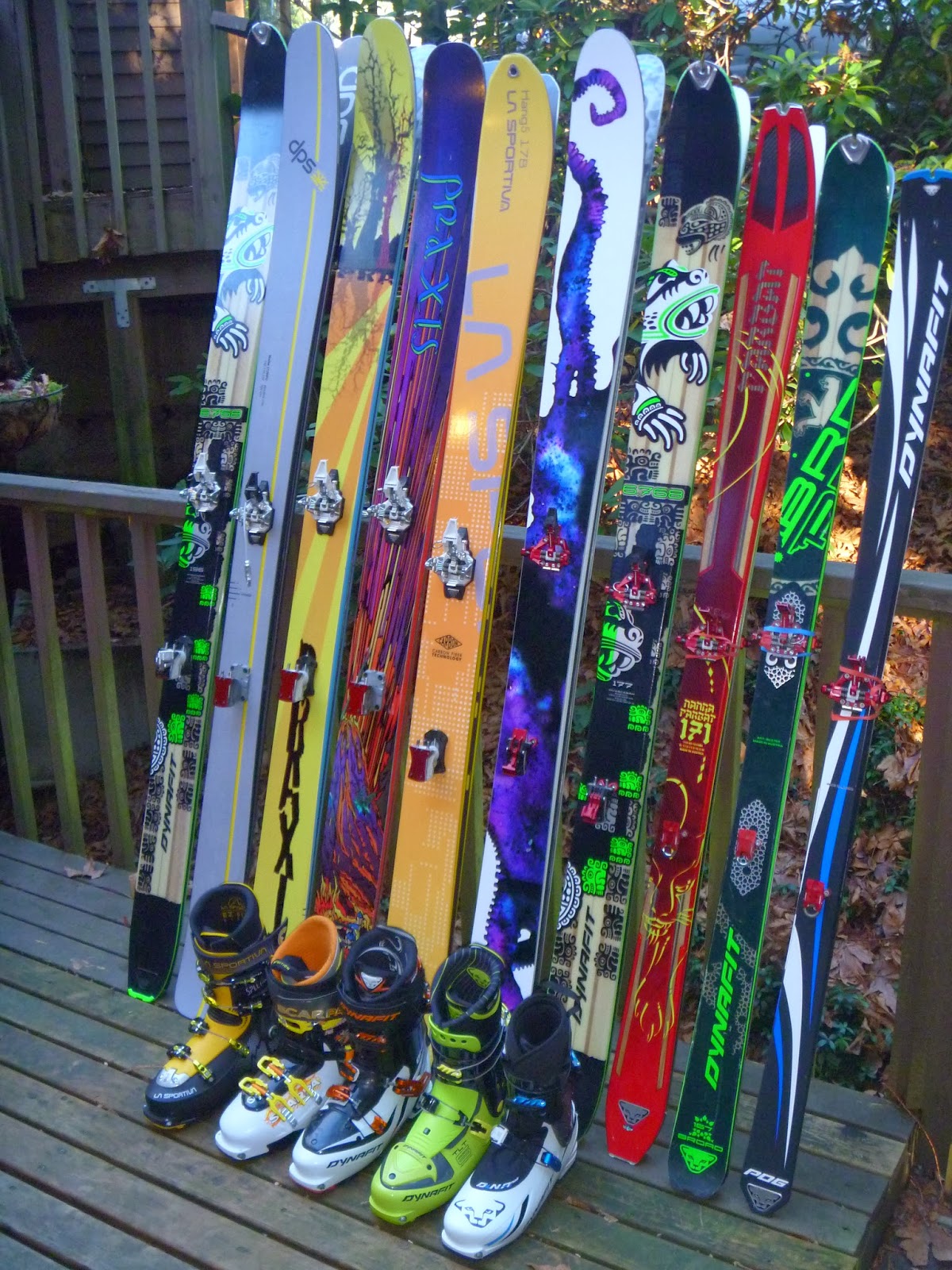 The Outdoor Retailer shows are an obligatory destination twice a year to preview the the products that will be available to the public in the next business cycle.  So what you see in Salt Lake's Salt Palace Convention Center the last week of January every winter actually won't be available physically (to most) for 6 or 9 months yet.   Usually for the esoteric items we want (rando skiers and alpine climbers) next fall at best for delivery but usually later yet if the item is actually worth owning.

Some of the bling from last year we are all just recently getting out on.
http://coldthistle.blogspot.com/2013/02/winter-or-2013.html

At some point reviewing gear, for a review's sake, you simply end up a shill for the industry and zero credibility as a consumer advocate IMO.  Hard not to fall into that trap and stay useful as a legitimate outdoor resource.

I own pretty much every piece of gear I really want to use.  A few of us that have been climbing for decades together and always the gear whores kinda laugh about it now.  Nice to actually not "need anything".   I try to keep my eye on new trends and gear but at some point it simply gets redundant.   I still like being surprised by new gear and just how good it is today.  But I don't see many real or major changes in ice screws, crampons, tools and even boots now for a while.  Couple projects in the works yet that will be fun.   Other than those the best are playing catch up with the leading design efforts.  For the most part at the moment I think I have covered the "leading design efforts" in painful detail, usually twice over.

I sat down last week and listed a few products that could so easily still be done better.  Hopefully they will find someone up to the challenge.   Like any social pendulum, it generally happens in cycles and often times it is as much by accident as it is by design.

Always the hype going on in clothing.  Less so generally in climbing.

Grivel has some new things that have peaked my interest.  I will be using and writing about them shortly.   I am hoping for a few more things to ping on my climbing radar. 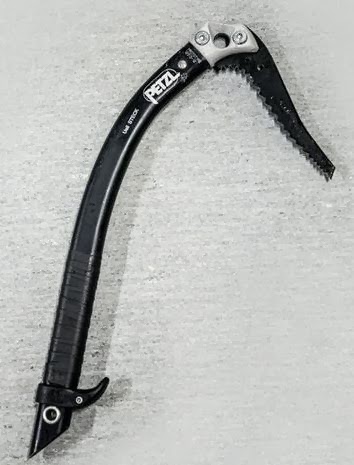 Hopeful, but not holding my breath

I try to sort the cream from the crop so it takes some to impress me.  Not generally interested in "new".  Only interested in things I'd personally spend money on.  It boils down to a point that the newest may not interest me at all.

Last couple of years the real technical changes IMO are in the ski industry.  Fun because much of that innovation just widens the opportunity for us as climbers to access and  enjoy winter objectives more fully.  As a skier it just makes life easier and more fun!    This year's newest ski gear that I find some interest in: 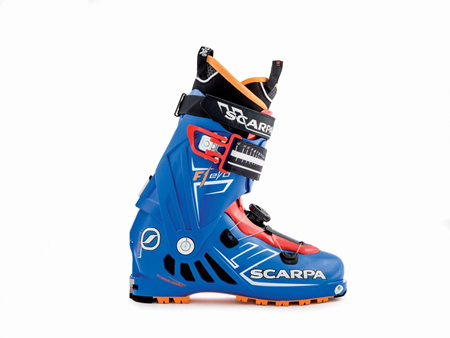 Scarpa's new F1 Evo will shake the entire market up with the new hands free lock!!
It has to work flawlessly of course :)   But I have high hopes coming from Scarpa.

1 Evo / F1 Evo womens – For touring-focused skiers who want ultimate function in a super-light package, the F1 Evo pairs game-changing performance – the Tronic hands-free ski/walk mechanism, which switches modes automatically based on whether the heel is locked into the binding – with carbon construction for serious performance on the descent, all at 2 pounds, 7 ounces per boot. The boot is designed with SCARPA’s Carbon Core Technology, a carbon-fiber frame that runs the length of the boot under the foot and provides stiffness for ultimate power transfer to the ski while retaining the progressive flex skiers seek in the upper boot. Closure and adjustment of the boot is achieved with a combination of a Boa closure system on the lower boot and a buckle and power strap combination on the upper boot. Inside, a heat-moldable Intuition liner features a flex zone for excellent mobility. Men’s and women’s specific versions are available. For skiers looking for downhill performance close to a SCARPA Maestrale and touring function more akin to a SCARPA Alien, look no further than this featherweight powerhouse. $699.

Dynafit's new wide, Super light continuing with Nanga and Cho technology.  One of my favorite skis early on, the Se7en Summits is coming back.  Transformed by the new technology and a bit more weight and less side cut than the Cho @ 80mm under foot and a cool looking graphic.

Denali Ski: The combination of weight, construction and materials makes this ski the perfect companion for long ascents and descents. The ski’s width of just under 100 mm at the waist and its weight of 1,390 grams (3 lbs 1 oz) reveal the special character of this model: The dimensions and light weight are balanced optimally for performance on both the ascent and descent. Its micro-sidewall construction and the use of carbon fiber reinforcements at the waist give it rigidity and ensure smoother skiing without chatter. The proven 3D carbon fiber construction in the tip serves to optimize handling in comparison with comparable lightweight styles. In addition, this model with rocker tip and tail reduces self-steering for more fun carving, particularly on difficult terrain. Like its predecessor, the Denali Ski is conceived for special demands on expeditions with mostly steep, icy terrain. For mountain guides, the model will be offered with integrated IVBV association logo.

In sum: The all-mountain ski for all occasions.

La Sportiva Introduces Skis with Carbon Nanotube Technology
The Vapor Nano ski is the flagship of La Sportiva’s Fall 2014 line
La Sportiva introduces the Vapor Nano, featuring a cutting edge carbon nanotube construction.  “We worked here in the USA with experts in carbon fiber who introduced us to nanotubes. They’re long cylinders of carbon that have tremendous tensile strength at an extremely low weight. Shaping them into a ski with ideal dimensions for the backcountry helped us develop a ski that is going to be the weapon of choice for anyone who likes to earn their turns, without sacrificing downhill performance.”

The Vapor Nano weighs just 1,200 grams (2.65 pounds) in a 180cm length. The ski utilizes a new ski construction process that reinforces a pre-impregnted composite resin matrix with carbon nanotubes that are sourced and produced in the USA. The result is an extremely lightweight and stiff material that is molded into a ski that features an aggressive rocker profile in the tip and a lightly rockered tail. Sixty percent camber and 20 percent tip rocker create a ski that is easy to initiate, does not waiver at speed, and floats effortlessly in soft snow. The Vapor Nano will be available in limited quantities in February 2014 in 164, 172, 180, and 188cm lengths. It will retail for $1,200. 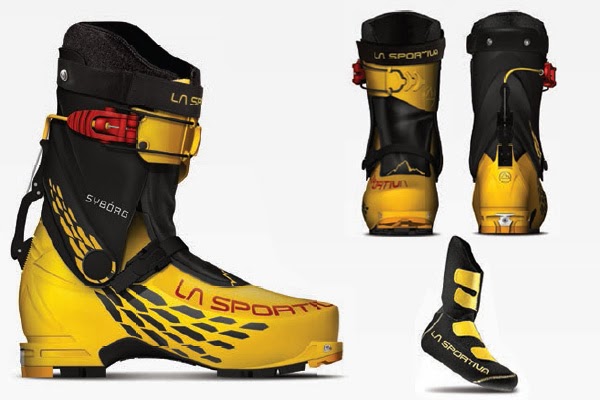 Furthering its pedigree in ski mountaineering, La Sportiva is also introducing the Syborg ski and boot. The Syborg boot draws on the innovation and technology of La Sportiva’s award-winning Stratos series of boots to create an everyday training boot for serious racers or a race day boot for amateurs. The two-buckle Syborg weighs just 800 grams (1/2 pair, size 27.0) and features the patented single level CavoBike lever to transition between walk and ski mode. The boot will retail for $749

That makes at least 3 new, really light weight 100mmm skis coming.  Word from friends that have skied both the Denali and the Vapor is...they are both "very good and very comparable".  I want to get both on a scale.  And on the snow!

Don't get your panties in a bunch over any of this.  Remember you won't see it in the stores and may be not in these exact versions for 6 to 9 months min.   I've gotten to the point I actually think the "pre-season Internet hype" is a disservice to us as retail customers.  And I am as guilty as anyone.   Nice to know what is coming.  Uncertain, just by how  the process works, on exactly what will eventually be sold or when it will be delivered.

I think it is always worthwhile to highlight whats coming, what looks cool / interesting / funky / weird. I don't have the need or the disposable income to buy all the latest gear, but a year later and the gear is being sold as if it's seasonal. I bought Scarpa Aliens with a huge discount because the retailer wanted to move them, prices in Japan are ridiculous so I can buy boots, skis, bindings and skins for something close to the price of just boots if I'm prepared to risk everything sight unseen. This year I bought some BD Carbon Megawatts for 30% off - the bindings and skins totalled less than skis alone retail in Japan. I may not buy stuff when its spanking new but if something revolutionary comes out I'll definitely think about it 2 years later if it fills a need. So, yes please, please report on new and interesting stuff at the OR shows.

The only new gear I would really be interested in is a climbing boot that you can ski in. There are plenty of ski boots you can climb in right now.

Is that Petzl tool something from the OR Show or is it a home-job?

Petzl.....but not from Winter OR. For those trying to answer....lower your speculation :-) And keep an eye out to the future.

Ueli may not have been totally straight forward in the interview. Good catch by Charlie on that one. Suspect it caught Ueli a little off guard. But not the first time that tool has been on the Internet.

Looking at the Ueli ice tools again, it seems plausible they could build a production version based on the SUM'TEC shaft... Its fully T rated, if I recall... Would probably end up being around a 16 oz give or take...

The B/T rating is just misinformation concerning the tool pictured. There is no liability concern. Only a product need in the market place keeps if from being presented as of yet.

Petzl could easily build the tool as fully T rated..or not. It wouldn't matter which spec they decided to build to. SUM’TEC has a B pick and a T shaft. Easy enough to mate a T rated Nomic head to a SUM’TEC shaft...makes a fully cert T tool...which is what Ueli's one off is. I stripped Quark weighs in at 16oz. The new tool will come in a good bit less than that with no rubber grip, no spike. More like sub 14oz. depending on how they eventually decide to finish the shaft.

Enlightening... Thanks for the info dane, I was admittedly misinformed regarding some details of the shaft... The other issue that comes to mind regarding such a light ice tools is swinging it... In bulletproof alpine ice... which sounds, unappealing... must be an acquired taste...

A lwt tool such as the one shown isn't made for miles of bullet proof. More likely a tool to hook or high dagger with than swing any way. But as a tool for extreme projects where the use of a tool is limited but required. Think the super light skimo Camp gear/axe. This is a tech version of that. Petzl made, still makes? the Racer axe. Super lwt but a steel head on that one. Nice axe for some projects. This one might be as well...for some projects. This one is just a different version using current Petzl technology. Nothing really new here. But no question I would like to own a pair.

Not sure even Ueli owns a pair though.

First public showing of that tool that I know of was here:

Only one tool there :)

Off the topic of 2014 OR, but in that picture of all your skis that heads the post, I think I see a couple examples of a Speed Classic heel paired with a Radical toe piece... how do you like that setup? Could one do the same thing minus the Radical's plastic toe shim, or would that result in a funny ramp angle?

(A post on mixing/matching Dynafit systems would be cool!)