Super Mario and the Dynafit TLT6

“I’ve always dreamed of a boot that is the perfect combination of weight and comfort.” After years of product development, DYNAFIT boot developer Mario Sartor (known as “Super Mario” to insiders) did it: The TLT6 counts as a true all-rounder. Among ski tourers, expedition mountaineers and ski alpinists around the world, it is recognized as a stable yet agile boot. In 2014, Super Mario, based in Italy’s Montebelluna, will be honored with a TLT6 Limited Edition model that will only have a run of 1,500 numbered pairs.

"He wears glasses, has a small beard, normally can be found wearing his white lab coat, always has a smile dancing on his lips and, above all else, he knows almost everything. That’s whey he is lovingly called Super Mario by his DYNAFIT colleagues, a name he has fully earned. For more than 40 years, the native Italian has lived his creative dream and realized his ingenuity designing footwear. As a child, his father taught him this handicraft, thus paving the way for his true passion. “I can let my thoughts and ideas flow into these products. And I can also harmonize state-of-the-art technology with my own visions. I am one lucky guy,” Mario says with a laugh, showing his newest creation, the TLT6.

It is a boot for alpinists and an exquisite work of art that is not to be underestimated. To honor the amiable Italian in 2014, look for a Limited Edition TLT6 as an addition to the collection. Special emphasis was placed on flexibility in the next generation of the successful TLT series. It is a boot for all occasions and, at the same time, is made for expeditions on ice and mixed terrain, scrambles up rocks, as well as for long ski tours. Behind it is countless hours of hard work. Mario Sartor is familiar with the demands of today’s ski alpinists: “We wanted to make a boot that optimally harmonizes weight, comfort and stability. We succeeded at this with this model.”

Mario Sartor, who also loves to head out on ski tours with his kids and grandkids every free moment he has, built an extra Filz aluminum layer into the sole of the shell for better insulation. In addition, he slipped into the all-rounder a warmer inner boot as well as two tongues of varying stiffness. Together with the Ultra-Lock System that allows users to switch effortlessly from ski to walk modes and vice versa, this boot has the comfort of a hiking boot and the optimal stiffness for descents. Mario even updated the boot shaft: With a cuff rotation of 60 degrees, it remains comfortable when walking.

Mario describes himself as a straightforward man, and although he has “a few years” under his belt, he still nearly bubbles over with enthusiasm for this job. Since 1974, Mario Sartor has designed and developed round about 100 pairs of ski boots, approximately 40 pairs of trekking boots and some 40 cross-country ski boots. He points to the current models, TLT6 Performance with the light carbon fiber cuff and the TLT6 Mountain that in turn comes with a Pebax cuff. “The responsiveness of this boot is impressive,” he says. “I am always fascinated by the plethora of technical possibilities of today’s times.”

Another passion for this technically oriented man is his vineyard. He produces his own wine and finds he can truly relax when working, grafting and processing the delectable wine grapes. After finishing the technical masterpiece of the TLT6, he’s certainly earned a glass of wine. We congratulate Mario and say thanks to him from the entire DYNAFIT team. "

From the Dynafit web site:
http://www.dynafit.com/press/tlt6-limited-edition-a-boot-to-honor-super-mario.html

As much as I liked the TLT5 and  how it changed how I looked at the ski world..admittedly it is not as refined of boot as TLT6.  The 6 is another generation of development and simply a better all around boot.  It took me a while to really appreciate the advancements of the TLT6 but is so much more than the TLT5 was as a ski boot it simple can not be ignored.

Bravo to boot developer Mario Sartor's efforts and Dynafit for bring the finished product to market ! 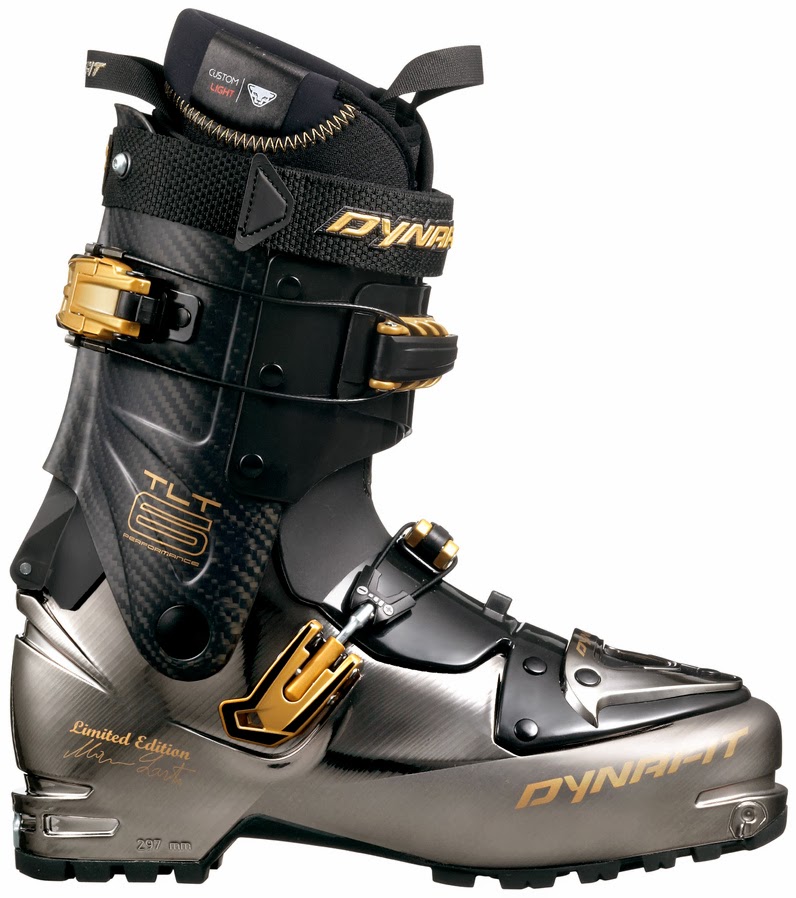 Would love to see a list of the boots he's developed!

Larry Goldie and I did a tour at Washington Pass with our new TLT6's. We spent the entire climb after parking the sleds raving about these boots. They climb like a hiking boot and have unbelievable control for the down. I was just shaking my head at the huge jump in performance these boots represent. I started touring in a pair of Herman Munster Kastenger's that weighed about 10 lbs. apiece. What a change and amazing development over the years.

Yep, first time I saw the $1000 TLT5P at OR in Jan I shook my head and said it "will never fly". By March I had to have a pair...even at $1000. Best skiing and climbing boot I had ever seen. Along came the TLT6 and while I now understand the cost benefit analysis ratio I didn't want "just a ski boot". Turns out, for me anyway, the TLT6 was as big a jump in ski boots over the TLT5 as the TLT5 was over every other boot available for my own use.

TLT6 simply amazes me. And if you think the 6 is good....in some ways the DyNA/PDG is even better.

Then there is the Alien 1 and the newest Scarpa F1 EVO. Great time to be a skier!!! My first true AT boots were a pair of plastic Trappeurs with a vibram style lug sole, 1982/3 iirc. High tech then. What we have now is like going to the moon...landing and then taking a swim :) But you already know all that :-)

A little off subject but would anyone care to comment on how their Dynafit PDG '13/'14 Boot soles are holding up. i have the 6 and wish it toured as good as the 5. i'm thinking of getting a pair of PDG's for spring missions and the few races i get conned into. worth it? or should i wait for the Alien 2.0. if only.
thanks in advance

Hey Jason, I have not tested my PDG for sole durability. Just been skiing the heck out of them. Really happy as a ski boot and have yet to notice any wear on the soles. But I am really hesitant to comment past that since I haven't used them on anything but snow. Great skiing lwt boot how ever. TLT6 tours better for me when stripped and used with the the Dynafit/Palau lwt foam liner. PDG drops a pound per foot in my 29s over a typical TLT6 set up with tongue and CR liner.

Mario developed most of the game changing touring boots..
Starting from some of the firts plastic ones at San Marco. Then moved to lowa and did the struktura series. Then to Garmont for the relaunch of the brand in touring with G-Ride, Mega-Ride, Adrenaline, plus all of their telemark boots too until 2005. Then finally all you've seen at dynafit starting from 2006, Zzero, Titan, DyNA, TLT 5-6, One, Vulcan etc.
Before the touring times he was working in most of the ski boots company in montebelluna area developing always great ski boots. Certainly his early ages in Garmont 70'-80' (first original company) were really great and he did some amazing alpine ski boots there too.
I had the pleasure to work with Mario from 2003 until 2012 in both Garmont and Dynafit!