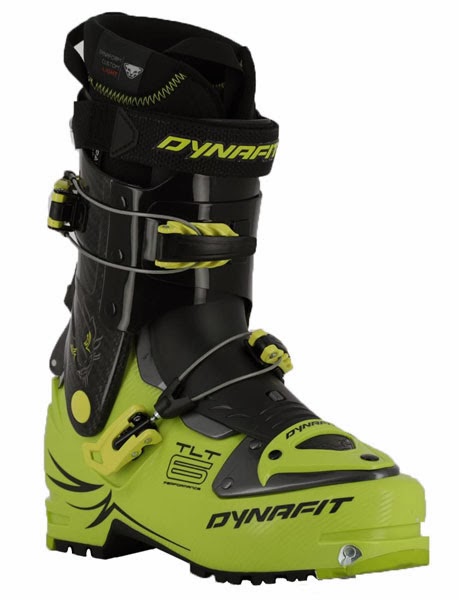 This was an experiment for me to take advantage of the TLT 6 Series of boots for my own use.

My "most used" and "must wanted" version of the TLT Series is a DURABLE and WATER TIGHT boot with the least amount of weight and the most amount of support.

I use the boots for skiing as much or more as I do for climbing.  So fit and weight are a fine line  for balance between the two uses for fit, acceptable weight and most importantly durability.  I have to be able to walk/climb on any sort of terrain knowing I'll still have a boot that lasts me a season or two with no worry.  I don't want to know that $1000 @ retail was a good investment on the initial buy in.

A $1000 is a silly amount of money in my opinion for any pair of boots.  I don't care how light they are.  Not durable for the intended use and caveats having to be added to a simple day out just for your boots?  Unacceptable by any standard in my world.

I am not into changing every buckle or rivet in my own gear just for the sake of change.  I never change anything that will be an obvious weak point or future durability/liability issue.  If it works I am good to go.  Because you can, is not my idea of, why you should.

Between the TLT5 and the TLT 6 I have found that I can easily go down a full shell size and not have to do any work on the shell.  If you can actually fit a smaller (boot sole length actually) the drop in BSL will make walking and climbing easier.  It is also a drop in weight.  No as much as you might expect though.  Only  64g between a 28 and a 29 TLT6 shell.   No reason to do this for weight.  64g is 2.25 oz.  A difference of 4.5oz for the pair.

Easiest way for me to accomplish the shell reduction in comfort with out modifying the shell was by using the PDG's TF size 29 liner in a size 28 TLT6 shell. 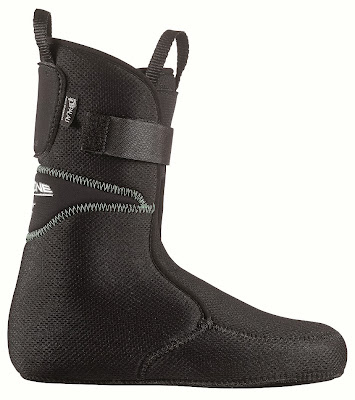 The PDG liner has slightly less foam thickness than the original TLT5 TF liner.  It is a bit shorter and 38g lighter in my size 29 liner comparison, PDG to TLT 5P TF.   The 29 PDG liner once  molded does fit the 28 TLT6 shell perfectly with my full length custom orthodic.

"Because you can, is not my idea,  of why you should."

I think it is worth noting here the details on the TLT5 and 6 instep buckle that most are seemingly  not aware of.  The first generation TLT5s had a rather simple buckle at the instep.  Problem was breakable crust, booting or a slight breeze would open the buckle.  By the end of the TLT5 run the buckle had been changed significantly.  A single cam button was added on the back of the buckle.  Which in turn helped hold the instep buckle closed in the same conditions, skinning or a boot pack that opened the gen 1 buckle with ease.   The 2nd gen. buckle is much, much better than the 1st gen. for staying closed.  Gen 1 is worth replacing with the 2nd gen TLT5 buckle.  Better yet the TLT6 buckle has two cams to hold it down and is also spring loaded.  Worth a try on the TLT5 as well I think,  The TLT6 buckle and shell design is so much better that I have not bothered  replacing the TLT6 as Lou suggested.  Try the TLT6 first is my thought and see if it works well enough for you before popping all the rivets on a expensive new boot. 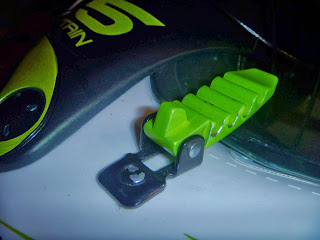 2nd gen TLT5 buckle.  If you are skiing any version of the early TLT5s take note.  If you are lacking this "peg" on the bottom side of the buckle that cams against the shell on closing order a new set from Dynafit customer service and replace the buckle 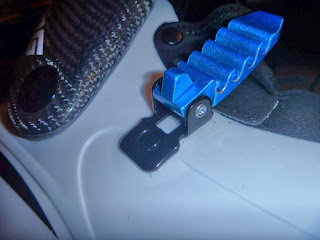 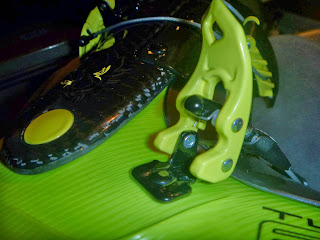 TLT6 has a double peg cam and is spring loaded
I suspect this buckle will retro fit on a TLT5 if you have room in the instep of your boot.  I do. 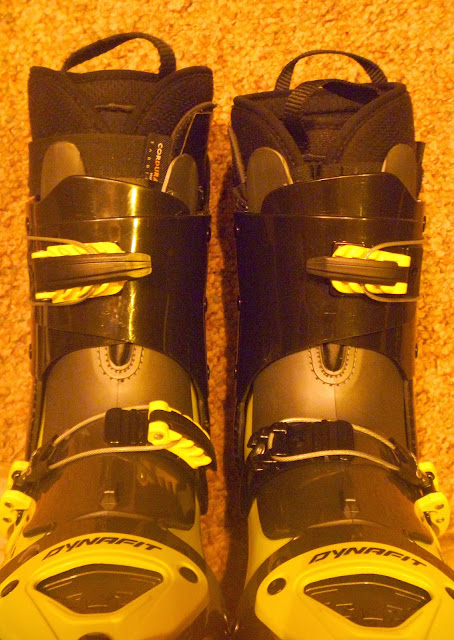 Worth noting the detail at the top of the inner boot.  PDG inner is shorter at the cuff and the tongue. Easy buckle swap from Mercury/ONE parts kit and then bolting on the smaller TLT6 instep buckle on the upper cuff. 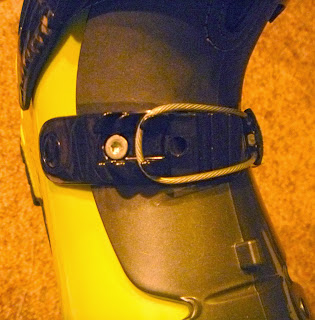 
Weight drop?  Remember I am looking to drop weight here not build the best ski boot.  I want a durable "mountain boot" that will climb and ski well enough for my own needs.  A lot of compromise on both ends of the spectrum for skiing and technical climbing.  There are off the shelf boots available that are less in initial cost and will climb or ski at a high level with less effort. 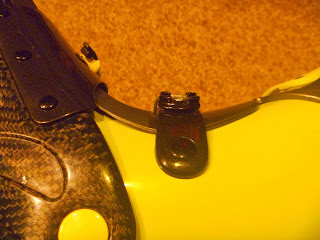 No drilling...all Dynafit parts. I say, "if the shoe fits, wear it".
Mercury/ONE latch buckle simply bolts on to clean up the boot's profile.

Down side of the modifications?
Both OEM factory buckles were supported by a the fixture (bolt and backing) and a integral metal stub on the back of the buckle that  was "stopped" by a cut notch in the buckle's plastic strap.  Now I have only the bolt and backing holding the buckle on and taking all the pressure of the buckle when tightened and in use.  I am not totally comfortable with that yet for long term durability.   I am going to order some spare bolts and backers straight away.   Just in case  my buckles start failing early on.  You also have a slightly less range of adjustment for sizing with the new buckle set.  But it is slight.

Inner boot?  The PDG liner is thin.  May be too thin for some.  It works well for me.  But as you can see from the pictures the cuff is not as high as the original TF liner nor is the tongue.  It seems supportive and enough coverage on the shin for my own us.  But worthy of a caution IMO.

Up sides? Smaller over all boot profile.  Much smaller and lower profile buckles.  Less faff and less weight.  A drop of 212.5g / 7.5oz per boot or 425g / 15oz for the pair.   Easy access Dynafit, bolt on/drop in parts.  A bit of excess plastic yet to chop off.  I suspect another 1oz will be easy to drop off the pair.   The big advantage here besides almost a full pound off the weight of a stock TLT6 is the added durability over a PDG/EVO with only a 12.5oz penalty in my boot size.

The Dynafit factory could do this even better. We could have a lighter and lower profile boot.  It has been mentioned before but think a TLT ONE made with a fiberglass cuff might be a worthy project.  Loose the additional toe cap for a removable tongue.  PDG liners, cut down the inner tongue while still staying mostly water tight.  My size 28s at under 1000g would seem easy.  And nothing left to take away!

When I get the courage I'll pull the front toe retainer piece, cut the cuff down and cut down the inner tongue.  Under 1000g should indeed be easy. 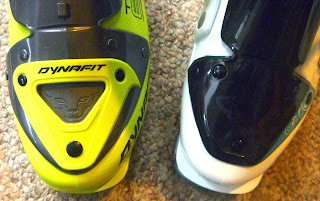 I molded my PDGs and was surprised how much room I had in the shell. And it is a tiny shell by comparison to a TLT. No way in hell I can wear a 28 EVO or PDG. Tried that twice when sizes weren't available. So I added my 29 TLT5 P liners to the 29 PDG shell and found it was really, really tight. So I put the size 29 PDG liner in my TLT5 shell and I found myself almost swimming in them. Lots of room in the shell/liner. Stuck the PDG liner in my TLT6 and again I had lots of room. Turns out the PDG liner is 42g lighter than the TLT5P TF liner. Hard to tell there was a difference in foam thickness but there is I think. Liner is a bit shorter on the cuff top as well. Not enough to bother me though. More flex in the ankle as well if the bigger ankle flex patch is any indication.

So a 29 PDG liner in a 28 TLT6 shell leaves me a lot of room...even though I think the instep is a little lower on the TLT6 shell. The SIX gets bigger internally for me with the thinner liner. Big enough now to actually use.

Anatomically the smaller 28 SIX shell actually fits my foot shape a lot better than the 29 shell. All of this was quite a surprise to me. When I took my 29 pre molded PDG liners down to Marmot to try them in a 28 TLT6 shell I was pretty stunned to have my foot "pop" into the shell with the fit that tells you it is almost perfect. I really didn't expect the combo to fit at all. Just wanted to try out the idea. I immediately thought..dammmmmmmnnnnnnnnn it! I have a couple of pairs of new skis mounted with tech binders that don't have any binding movement. Dropping 10mm in BSL is going to be a PIA.

Waiting now for the SIX P to come back into stock. Got a spare pair of the PDG 29 liners on the way however. 1/2 the problem solved.

The 28 fit was good/impressive enough for me to go through the PIA short term for the eventual long term use of a 6.    And costly no doubt."

I see you have a pair of Spectres, any chance of a review sometime?

Hi Tom, Two reviews coming...one on the Spectres alone and one a comparison of 6P, ONE, RS and Spectres all in the same review. Next week or two for both.

Look forward to it