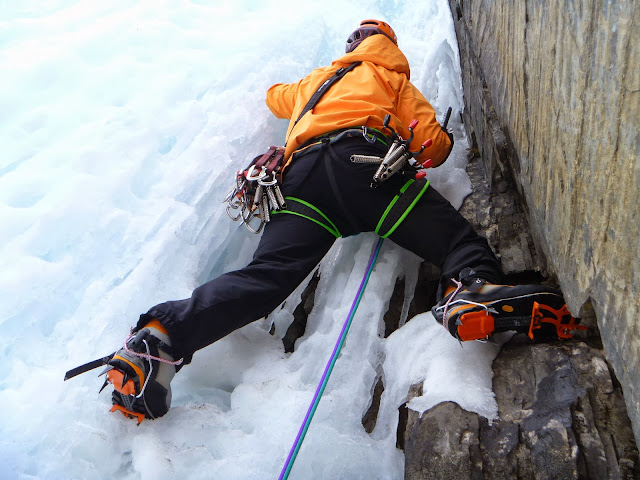 I am a pretty simple guy when it comes to climbing.
pragmatic:


I am a pretty basic guy,  I don't really care too much about how others see climbing gear or how they use it or how well it works or doesn't work for them.  I have my own priorities and needs for my personal climbing gear.  And until the last few years and starting this blog very few times in my climbing career (what little bit of there that was a career) has anyone ever given me anything or given me a discount on any product.

But I always have my ears and more recently my mind open to what others think of their own gear.  I actually prefer the old fashion method of coming to an opinion (no matter how opposite that might be to the "general" consensus).  I base my opinions on my own experiences and I'm skeptical of anything I get told until I can duplicate the results.

These days climbing is big business.  Many times the opinions we see/read are nothing more than the spin on the ad copy someone wants you to believe so you will buy their product.  Professionals in the field will endorse what ever product they are given, generally without ever knowing any details about what else is available.  "The last thing they used is the best thing they have used."   Happens when you are paid to tell us just how good the next "Ford Pinto" really is.  That is why they are sponsored in the first place.  They are the  poster children of the "MAN", which is climbing big business.   Many times having not seen the newest Porsche, while they are stuck driving that Pinto around, fat dumb and happy.  Hey it is "free" gear after all and some extra coin for the next plane ticket.

Don't get me wrong. here.  Just about every product I can think of has an comparable product to choose from these days in climbing.  From boots to shoes, clothing to ropes many good ones, few really bad ones.  None of the bad ones will you seen here on Cold Thistle.

So how do you choose the "best of whatever" without trying everything out yourself?   Hard copy climbing magazines are long out of date IMO.    But then everyone finally realised that magazine articles and reviews are simply bought.   Yep bought and paid for with cold hard cash and additional swag.

I don't need the strongest, or the most technical stuff.  I've seen screws, axes and crampons fail.  But I have also seen them all take some really serious use and abuse.  I like light weight.  But at some point  things can get too light and not actually work with out reorganizing your entire kit.  That is a bad plan financially if money is important to you.

I still look for the lightest version of what ever is available.  You never know what you might come up with.  But weight is not the end all on gear.  Sometimes more is less.

A few years ago I spent some time, effort and money to find the best ice screws for my own use.  Only one requirement for me to be the best..."how quick would it go in".  Beginning and End to that discussion for me.  "How fast will it go in?".

I have since tried that same test over and over again several times with all the unusual suspects.  Always with the same results.  My last test was two winters ago now.

I have wondered about the details as to why I get the results I do.    But ceased to worry about it since that last test.  I am a believer until something else comes along that is better.  And that will eventually happen.  May have already.  I don't/haven't see everything.

I also don't worry at all these days about what a ice screw will hold for weight.  I either get "good" screws when I am climbing, if required, mentally switch to soloing or simply don't climb that particular piece of ice.  It is easy really.  From my perspective "every thing" goes in and comes out easier than a Snarg or a Warthog.  And everything you put in the ice these days is going to hold a lot more in a fall than an over-driven Snarg.  Rule #1?  Don't fall.  If you can't abide #1 use rock pro and tie down your belayer for good measure. 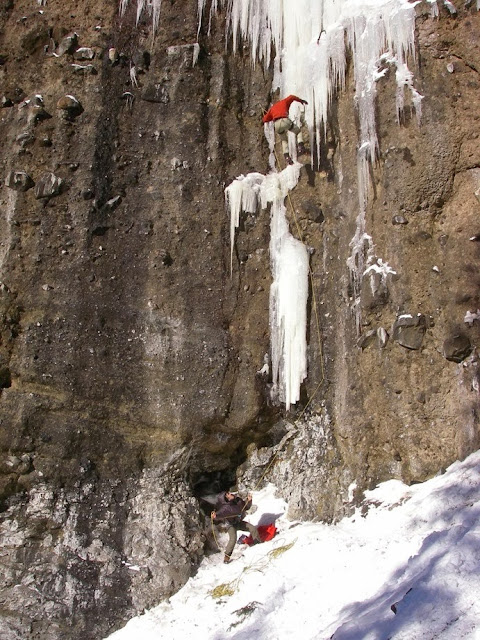 
The photos below might be good food for thought when buying ice gear while wondering, "Just what are the real differences in ice screws?  Are there any?"

This is a good conversation starter:
http://www.chickswithpicks.net/tech-talk/kitty-calhoun-interview-with-bill-belcourt-of-black-diamond-with-michael-kennedy-jack-tackle-and-jay-smith/

A few errors and soem lack of information in that conversation to better understand what is happening I think.

"What actually happens as you pull out a reverse thread screw (Grivel) is that because of the lines of strength facing outwards, the same force is spread to MORE ice.  So more ice is involved, making the whole placement stronger and able to hold more weight while absorbing more energy. You are actually increasing the surface area that is being pulled on with a reverse threaded ice screw."

I don't care what screws you climb on.  Never fall and this kind of theoretical stuff will never be tested.  I have given away many more ice screws than I currently own.  In the recent past companies gave me screws.  Never been given any ice screw I actually want to climb on if given a choice.

Like I said I am a simple guy.  I use what I can most easily place. No great pictures to show you that.  But I love it when a picture tells a story so much better than the sales hype.   My first thought when I saw these years ago was, " I don't climb on concrete".    Or understand why they are pulling straight out.    Then I rethought the "concrete" some and the winter gully ice I found in the Alps :)
Which had me ponderig the pictures and test data again. 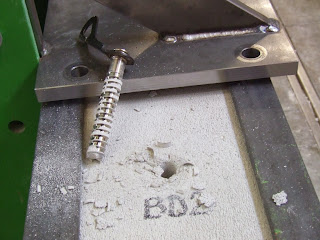 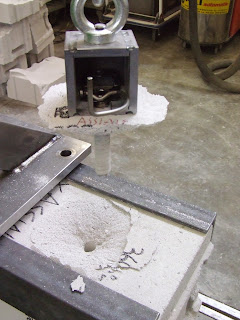 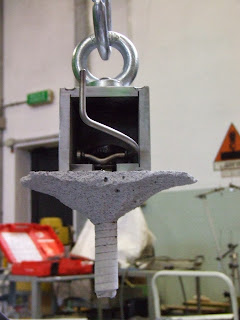 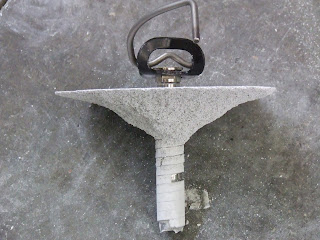 reverse thread pull to failure on concrete
additional data on points o nthe testing:
http://www.cnsasa.it/storage/wcms_f/alleg/LPV_documenti/Articolo%20Viti%20Ghiaccio.pdf
The concrete used was the UIAA indicated standard for this kind of test.
Paper presented at the UIAA Safety Commission on 9-11 May 2007 in Munich.

Crack pipe or pizza..take your pick ;)  But then again, if nothing else it is worth thinking about, even if you are like me and not climbing on concrete and never going to fall.  Or at least not fallen yet.
Posted by Dane at 7:03 PM

Perhaps I missed it, but any text/numbers associated with the ice screws in concrete test?

And for what it is worth, I picked up my first Grivel screw for last season and it was incredibly more easy/faster to place than BD screws.

Bill: "It depends on how good you are with a file. When the screw is fresh, its like a brand new drill bit… Its like guys doing the same thing with disposable razors. You have five or six in a drawer and you just keep grabbing them and trying them and you aren’t quite willing to throw them out so you just keep cycling through them a few times until you finally get around to getting rid of them. Ice screws are the same way."
Chicks with picks, please get rid your old dull ice screws by sending them to me care of Dane at CT, many thanks.

Without numbers it's impossible to interpret these tests. Some questions that immediately come to mind:

If the testers had a hypothesis about failure modes for different thread types: A) what was it and b) did they attempt to address that by changing the material properties of the concrete?

Did the testers pour and set the concrete around the screws or somehow drill the screws into the concrete? If the latter, how did they ensure no damage to the threads?

How many tests were run for each type of screw? What was the mean and standard deviation of the pull-out strength? Do those numbers correlate with failure mode? Related to the above question, did they start with a new screw every time or attempt to re-use the same screw?

So many more questions come to mind for this to actually be a scientific study, but those are just the beginning. Without some sort of quantitative data, any conclusions drawn from these images are purely speculative.

Additional questions come to mind. If you are interested in "non-ideal" conditions, when the pull angle is not perpendicular to the surface, is the failure mode the same?

Did these testers pull at an angle other than 90 (defined as the angle between the pull and the surface)? If so, what are the results? Again, same questions about number of samples, mean, standard deviation, and correlation with failure modes.

Is there any reason to believe that the interaction of the threads with the material stays the same as the pull angle changes? The failure mode of objects is usually significantly different based on the angle (and location) of applied force.

Did the testers have a hypothesis for the different thread types for variable angle pulls? If so, what was it and how did they test it?

Also important for variable angle pulls, how would one account for the difference in material properties between concrete and ice? If the failure mode of screws is significantly different in these pulls, then the material properties are going to play a large role in this.

It seems making any correlation between failure modes of the different thread types in ideal and non-ideal pulls would be very difficult using concrete.

Here are some experimental evidence and some more data... unfortunately the report is in Italian.....
http://www.cnsasa.it/storage/wcms_f/alleg/LPV_documenti/Articolo%20Viti%20Ghiaccio.pdf

all other things being equal, this result makes sense to me.
the orientation of the BD thread creates a higher stress concentration in the surrounding matrix under pullout load. there would also be a higher stress concentration at the root of the thread as well.
you don't see that sort of thread profile in machine design, probably for that reason.

Dane, I wonder how many of your anonymous commenters actually climb real ice on a regular basis or are just your run-of-the-mill loser internet know-it-alls from a site you unfortunately frequent. keep it up!

Dane,
Nice post. I'd really like to see a similar test done with the CAMP screws. IMO they seem to be faster placing than BD or Grivel and have a more neutral thread angle than either.

Very useful topic.
Apart from how fast they go in, I wonder if the higher stress concentration shown with BD vs Grivel screws has anything to do with how quickly they get dull? Over 1 year of extensive abuse in the Canadian rockies and in Valdez, AK, my BD Express's had to be sharpened twice while Grivel remained untouched. Is that due to the composition of steel alloys being used for each?