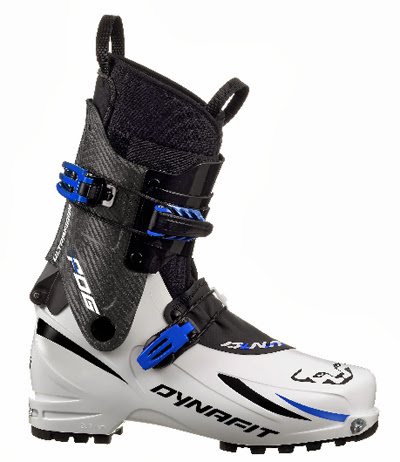 But that doesn't stop the gear geeks like myself from wanting to have some way to measure how stiff or soft a boot's flex is.  Sad part is flex has so little to do with how a boot feels or how the boot flex is  transferred to the ski.

Stiff boots can be a pain and a handful.  Or comfortable and  respond instantly to your every command in less than a mil-second.   Same can be said for a soft boot if you have the skills to use them well.

Below is some info gleaned from the TGR web site and a couple of links.

Old thread was here. Have PM'ed Tony but he's missing so don't have ability to update the list. I will commit to updating the original post. Looking back this goes to 2007 so has some super old boots but is very useful to leave it in so I've kept as much as possible original

b) Once the stiffest AT/Freeride boots flex ratings have been established, the ratings of the softer AT boots were established down the flex range fine-tuning up or down according to, again, posters' input.

A recent discussion on  TGR and the newest snow here got me into all my current boots for a re-evaluation. I'd like to add some of my guess work/impressions to the data base.  YMMV so try before you buy!    Not so impressed by the numbers here other than to rate the boots stiff to soft. In my stable of current boots this is my hierarchy after looking at them all again last couple of days. TLT6 is a lot more ski boot than the TLT5 IMO. Noticeably so side by side. I'd bet some are really going to like the ski improvement with the TLT6, myself included.
Please note that all these numbers are based on side by side "rug testing" at room temps for the most part.  There isn't a lot of difference in how they ski by the chart comparisons IMO.  But that is based on memory, field notes and my impressions sitting here at the computer.  Carbon cuffed boots are pretty rigid going side ways.  How the boot lower deflects and deforms is another story altogether.  The more the lower shell collapses, or the sole flexes as with the TLT5, the softer the boot is going to feel even with a carbon cuff.   TLT6 is proof of that.   Everything else being equal the lower shell material and the hinge/interface design is important as to how the boot changes under load..  Which is why the Scarpa Alien 10 is so impressive.  But the lower shell and the upper cuff have some carbon in the Alien 1.0.  Which means a rather rigid boot by comparison to even the standard Alien which doesn't have carbon reinforcement but the same design shell and cuff.

This is a work in a continued progress on my part,
and not everyone will agree.  Factory published numbers are highlighted.

La Sportiva Spectre 110 /120 flex rating from LS.  I think it is stiffer than the Freedom SL and the TLT6 with the black tongue if you buckle it tight.  Leave it buckled loose and it is definitely softer than the TLT6 but still very progressive.  It is defiantly a different boot than anything else I am currently skiing in.

Freedom SL- Scarpa gives it a 120 flex (softer and more progressive than the Maestrale RS IMO)
Nice plug boot technology with a decent walk mode.  Also a full pound heavier per boot than the Spectre.

110+@ TLT6 P w/ black tongue, with the CT liner (could be more yet with a Intuition/Power wrap or another buckle)  Still the lightest boot here and one of the stiffest.
110-@ Dynafit Zzero ("Green Machine") CF 4-buckle, the last 2011/2012 full carbon cuff model

85+ @ Dynafit PDG   A stiff and rather short boot.  Slightly less tall that a TLT of any generation and a thin/lwt Palau heat moldable liner.  Likely able to push a lot more ski than I ever give it credit for.

85 @ Dynafit One PX softer cuff than a TLT Mtn with tongue in place, stiffer sole than a TLT5 (great boot but softer than I remembered..all in a good way though, love this boot)

85- @ Dynafit TLT5 Mountain, stiffer cuff than a One, negated by the hinged sole of the TLT5 platform (another really good boot IMO that doesn't reflect the low number while skiing)

I was following the TGR thread, and I was very intrigued by the Vulcan/TLT6P comparison. The gist was that a Vulcan shell minus lower buckle, tongue, and power strap was about 4.5 ounces heavier than the TLT6P stock shell but they were probably similarly stiff in that form. From a ski perspective, the Vulcan would then have the benefit of a much simpler transition from hike to ski (no tongue to fiddle with and no strap). The Vulcan would also have the benefit of having the option of fully decking it out to be stiff as hell if you wanted that. In a world where I can only afford one, I'm having a tough time justifying the lighter weight and potential climbing prowess of the TLT6 when the Vulcan comes with its own set of advantages for everyday use. Especially when the TLT6 may not climb well enough to justify that consideration.

Hi Brian, I hear ya. One of the reasons I pulled out all my boots to play with recently. No doubt the TLT6 will always climb and walk a good bit better than the Vulcan. Less boot weight, shorter sole (a biggie) and I'd want to check the rocker. The Vulcan will always ski a little better than the 6. BUT I fit them so differently! I bet I coudl get 90+% out of the 6 if I fit it like a ski boot and not a climbing boot. I am a fan of soft boots and the TLT6 is the stiffiest boot i have been in for a while. Much stiffer than the RS as an example. Problem is when you start stripping either boot things get confusing. Happens with me as well. I just go back to the mantra...SIX is skimo boot. It works/was designed for mountaineering and ice climbing. Vulcan is a full blown ski boot that you can "hike" in.

Have you used Alien, whats your take on them as a climbing boot?

Compared to TLT5- They are lighter, have better touring motion, even ski better (Andy's review), comes with gaiters so open shell is not a huge problem, have vibram sole and intuition liners, boa lacing for fit adjustment..

missing the toe flex of TLT5 but still they are a soft boot.

I am wondering why you havent moved on to these?

Hi Huzefa, I have Alien 1's and PDG boots here now and have been using them this Fall. For my own use (uses) I have several problems with both boots. But at least you don't have to worry about loosing lugs off either version Alien's sole/tread! Which is why I committed to building a lwt/stripped TLT6 for climbing 1st and skiing 2nd. Part fun project, part what I was required to do since nothing else seemed particularly suitable for what I wanted. But any of these boots ski well. Some ski better than others but it isn't much IMO. Andy's review is great. Good read. At some point soon I'll do a review of booth factory boots and give you the final details on my "bikini" TLT6 and how to build your own. At a lot less money than the buy in for a Alien 1. It is better for what I needed that either. Not so much "moved on" as "been there done that" and went a different direction entirely for my own climbing in a tech fitted ski boot.

What problems do you have with aliens? and how is modified TLT6 a better climbing boot as it also doesnt have toe flex of TLT5?

I am looking at getting alien (0.0 / non carbon) for touring and ski mountaineering, but plan on doing lot of climbing in them so your perspective will be appreciated.

More to come in a new post on why. But not tonight. More on the TLT6 mods for my climbing boots here:

I am even closerr to the PDG weight now with no down sides to the weight loss mods.

In a technical crampon having toe flex doesn't matter because you can't use it anyway. Everything si a trade of of one sort or another.