"I just climbed the southwest face of Mount Huntington in the Alaska Range with Clint Helander. Call it what you want: the third ascent of the Phantom Wall, a new variation, or a new bail, whatever--it was incredible!

Here's the skinny on our climb of the Southwest Face of Huntington. We repeated the crux pitches of the Phantom, but missed the summit due to very bad weather. So call it whatever--I'm calling it a fun adventure up an incredibly beautiful mountain.

Clint and I left our camp on the Tokositna Glacier at 4:30AM on May 2 under perfect weather and snow conditions. The "Death Valley" used by Jay Smith and Paul Teare looked, well, deadly and we agreed to not submit ourselves to this needless objective danger. So, the plan was to gain the technical climbing on the southwest face (the crux pitches of the Phantom Wall) via a snowfield that cuts across the face from the Upper Park on the Harvard Route. We simuled up the Harvard, arriving
below the Spiral in about four hours. A short downclimb and traverse led to the middle part of the face. From here, we climbed about six pitches of technical terrain (75 degrees, M6R, A2) along the right edge of a steep diamond shaped wall to gain the lower angle terrain above. We had some beta from Jared Vilhauer that was crucial to moving quickly over this ground. The weather started to break down (the first time the forecast was right in a week!) as we simuled up the middle of the face above. We soon lost visibility as winds picked up to 30mph and snow started to fall. We couldn't see the summit, so we kept going straight up. This landed us in the middle of the summit ridge, where we conceded to the weather and turned tail, deciding that our fingers were worth more than any summit. The descent down the West Face Couloir (Nettle-Quirk) was awash with spindrift, often reducing our visibility to less than a few feet in the darkness, but it went surprisingly quickly at right around five hours. For a final bit of excitement, I poked into the bergschrund and another crevasse in the course of ten minutes, eventually stumbling back into our camp at 3AM on May 3rd for a 22.5 hour roundtrip." 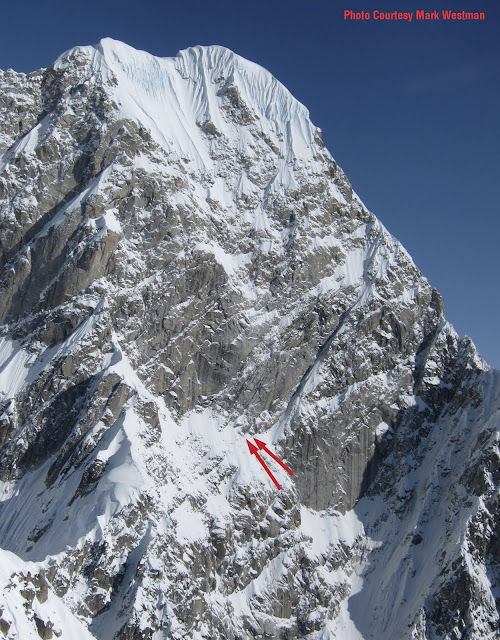 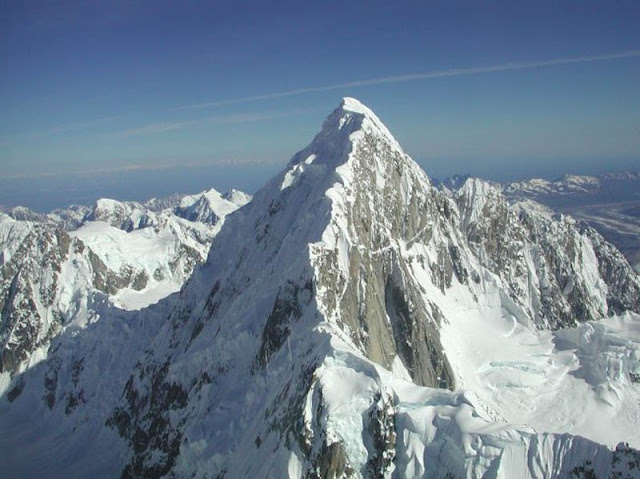