I never used down for insulation until this year. I had survived for years with my €35 Quecha belay jacket so why did I need to spend my beer money on a down jacket? You and I both know the pro's and con's of down over synthetic and it was when I realised that if it was wet in the mountains I'd rather be something else that I realised I should probably start using down. This year I bought my first piece of down clothing, a Rab Microlight Jacket which I have been really happy with and recently I was given a First Ascent/Eddie Bauer Downlight Vest to review for Cold Thistle.

My first impressions were....who or what is First Ascent/Eddie Bauer. Maybe I'm particularly ignorant but I had honestly never seen or heard of this brand before in the UK or even in Chamonix where they have it all. I realised I wasn't that ignorant when all of my mates kept asking where I had got it from. I was really surprised that no one had heard of it as it looked really well made with good materials and features. Why haven't we seen it before? I dunno, I'm just a climbing youth living out the back of my van but if I had to have a go at answering that question it would be that they have a lot of competition over here especially from Rab. So it would seem only fair to write this review with a comparison to Rab's rival product, the Microlight Vest, to get a better understanding of why I genuinely think that Downlight (the First Ascent one) is the better down vest. 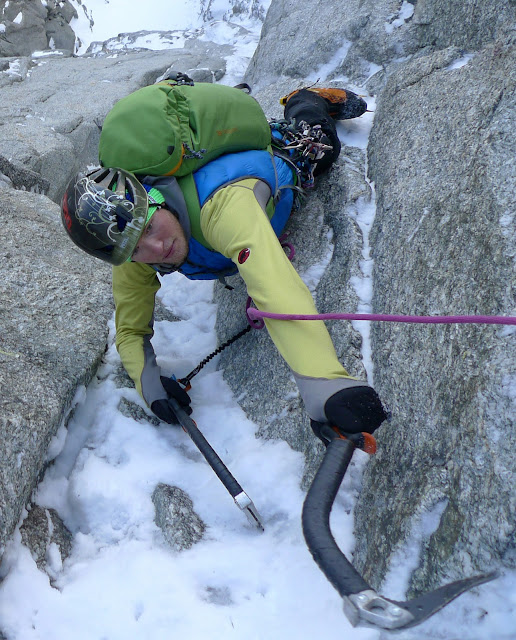 Apart from having very similar names and looks this vests actually have very subtle differences in there design and features. First off the Downlight has a higher fill power than the Rab Microlight (800 over 750) which means it will have better loft under outer layers which could give it the edge in warmth although you would proabbly really struggle to notice. I think that the Pertex on the Rab vest is probably better at keeping the wind out but it is heavier than the material the First Ascent has used which is in my opinion more breathable. The Downlight has zips on the hand warmer pockets with a fleece liner which I prefer to the the non-zipped, pertex lined pockets of the Microlight because they do fill with snow if its windy and you can't put anything in them when your climbing, however I have heard this is something Rab is going to change soon. I would have preferred to have seen the pockets on the Downlight slightly higher so you could still use them if its tucked into your harness but I can see why they have put them so low and lazy for a more relaxed feel when your just dossing about town or at the crag. I like that First Ascent offer regular and long fit's for this vest which I have never seen before and given the option I would have gone for the longer cut.

I did have a few issues with feathers coming out to start with but that seems to have stopped now and I think it was probably just the slightly sharper feathers working they're way out rather than an issue with the fabric or stitching.

I am a big fan of my Downlight Vest now. At first I didn't know where it was going to fit into my clothing system but now it comes with me everywhere, mostly as a back up layer, but I have also used this to climb in too which worked really well, keeping my body warm without restricting my arms. It seems to be putting up with some reasonable abuse with little sign of wear which is also impressive for such a light garment.

Even though the Microlight and Downlight are pretty similar I prefer the cut of the baffles around the shoulders which give a less restrictive feel. However Rab have managed to squeeze a chest pocket into the Microlight which I would like to see on the Downlight as its a useful place for me to keep my camera and spare headtorch batteries. If I was stood in the shop with both these vests in my hand I think I would go for the Downlight primarily because of the cut around the arms and the pocket design. With this choice would come with the added benefit of being a bit different to the rest of the Brits you see shuffling about Cham-Town in there Rab kit. I hope I don't get excommunicated from the British climbing fraternity for such a conclusion but screw 'em I'm happy.
Posted by Dane at 11:44 AM

Nice write-up Dave. Semi-OT question: what's the Mammut piece you are wearing in the photo, under the down vest? It looks really nice!

Yeah, I'd be interested to know what those leashes are too?

Hi yes its the Yukon jacket.
Really nice bit of kit. I usually get to hot in soft shell so I climb with that most of the time.
Blue Ice Boa's too for the leashes.