This is a jacket I should have written up a long time ago.

It can be found here:
http://brooks-range.com/cirro-hoody.html

Last winter when us rookie Americans kept missing the last Midi tram off the mountain at the end of the day we had few options.  The Loo or the walk over to the Cosmic hut.  Being on a budget we  would stay in the Loo unless the tram crew kicked us out because of the bad weather and over crowding.

Even in the Loo it was a miserable night for the most part.  Not very comfortable with no gear and colder than I would have liked but not the typical -30C it was hitting outside either.

I think it was the second night up there that I started dropping the Cirrus in my ruck as my "last" layer.  And it did make a big difference in the grand scheme of things.  I was comfortable with that last layer when I hadn't been previous. Less than a pound and worth every penny.  I would have used it a lot more this summer and fall if my plans had worked out.  My only complaint was this particular one was in black.  Hard to get good pictures with a black jacket :)   More so if you only use it climbing at night or on an uncomfortable bivy.  When and where the jacket did get used is high praise though for a garment  designed just for those exact kind of instances.

Here is why it is so good:

It has a great hood, that does fit over a helmet, and a stand up collar in addition to that hood.  The fit is relaxed so  I could easily layer under it.  Slick as well so nothing to hang up when layered.   And it all stuffs into one of the side pockets easily for packing.  As good as it gets for materials and insulation when a lot of the 60g jackets have gone to Primaloft Eco, Brooks didn't dummie down this jacket. 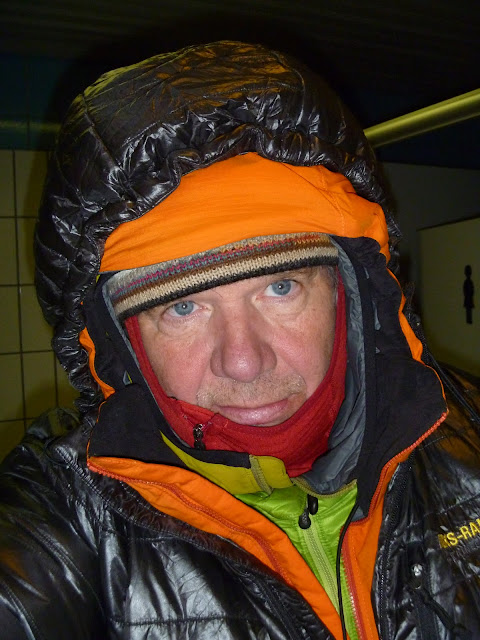 No joke, layer six is a Brooks-Range Cirro.  The Midi upper station Loo, 2am, Feb 2011.
60g of Primaloft One and 2 layers of Pertex are enough to make a stark difference when it is cold.
Posted by Dane at 2:49 PM

being 60gsm of Primaloft why would you not use that in place of the Atom?

And just curious, what are the other 5 layers you have on there

Atom is made to be a VERY breathable sweater with a very close fit. Hence the pile side panels in the Atom LT. I use mine over a R1 hoody generally. It is my main climbing "action suit" top if I am not doing anything where I'll touch rock with my upper. The Atom LT would be a bit fragile on hard mixed. Better a soft shell there.

The Brooks is a very light weight belay jacket, that is cut and fit accordingly. It doesn't breath as well nor is it designed to as the Atom LT.

Layers? First (#1) is a merino wool hoody my Sherpa Adventure gear that you don't see. It is the Kushi. Then a Patagonia RI hoody, (#2) which is red, followed by my puke green Atom Lt hoody (#3), next is a lime green Patagonia Nano Pullover (#4), the amazing Atom SV which is pumkin orange (#5) and finally the black Brooks (#6). And a wool and fleece stocking cap makes it (#7)

Th majority of this particular climb I was in either the Atom LT on top or later in the day the LT and the SV over it, unzipped.

Mistake on the layer comment, sorry. The picture reminded me after thinking about it. I knew it was going to be cold on this trip so I added the Patagonia Nano this time around thinking I could avoid using the SV later in the day by adding a wind shell to the LT. That didn't work out as planned when a big front moved in early, the wind came up and loose snow was blowing around. So I bailed into the SV early on.

But I was never able to zip the SV while climbing....just too warm until the sun went down.

Being a self proclaimed tightwad, what's you opinion on going for an pullover version of that. Or am I better off buy one less case of PBR?


That just sounds pathetic, I might have found my answer.

Like a PBR...either version will drop into your pack and never be noticed until really needed ;)

Love my SV. That thing is deceptively toasty. Happy to hear it helped make your evenings a little less miserable!

Have you guys tried that Marmot Vars? Midweight Powerstretch, with a hood that fits over your helmet, and thumb loops. Just under a pound for medium.

Campsaver has the Brooks version on sale right now for $88 in their "shed" area.

Spouse has a closely-equivalent Rab Xenon she picked up at 2nd Ascent for a song. My BR is on the way which will make both of us happy.