It was the view and understanding of Dr. Munson, way back then, that  “Weakening of the foot muscles is one of the penalties of civilization,  as walking is less and less a factor in locomotion....the introduction of railroads, street cars and automobiles, has materially interfered with foot development.” 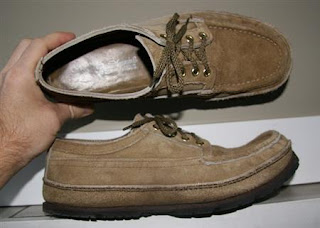 "I did an hour hike up and down a back-country ski trail the other day in a custom pair of minimalist shoes. Packed snow, nine degrees Fahrenheit, and my feet were toasty the whole way. They have no heel lift, no cushioning, an anatomically correct design, and are the only shoes I've found other than FiveFingers where I can actually splay my toes; they have excellent traction. No need for snow shoes, or Yaktrax.


A new start-up minimalist shoe company? Nope, this company has been making minimalist footwear for over 100 years. It's the Russell Moccasin Co. of Berlin, Wisconsin, and the shoe in question was produced for me as a prototype after a conversation with the 80-year old owner.

Like many of us, after starting to wear Vibrams on a regular basis, I realized that traditional shoes were no longer going to cut it. I'd been able to find decent, but not great, alternatives for office wear, but the one problem remaining was cold weather. How to get a boot that would be suitable for hiking in the winter in snow and on ice? After a good deal of research, I found that the Russell Moccasin Co. makes custom boots, and some of them sounded close to what I was looking for."

I suspect a few are now beginning to think I have lost my mind :)

I and my family have a long history with the Russel Moccasin Co.  So if you have ever wondered where my shoe fetish started, it was here while in the 2nd grade.

I could go on but I'll leave that for the Q&A session in the comments that are sure to follow. If you are a minimalist runner I suspect you'll like what Russel has been doing with shoes and boots for years.   For the rest of your it might take a bit of wrangling to wrap your head around the need let alone the actual shoes/boots Russel offers and their cost.

There isn't much footwear that gives Dane "happy feet".  A custom pair of Russels is one of my definitions of the term.  But until just the last few days I had never thought about actually just running in them.   I have used them for everything else and in conditions that would never makes sense if you didn't know more about the construction of Russel's entire line of footwear.

But "just running" in them makes a lot of sense if you are into a minimalist running shoe.  Which I have been, long before the Nike Free or Vibram 5 Finger. 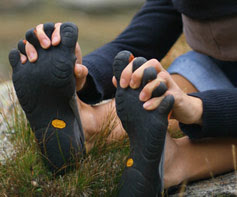 If you ever wondered what tight rock shoes or rigid soled mountaineering boots were doing to your feet this is a good read.
Dr. Edward Luman Munson's observations from 100 years ago:
http://www.archive.org/details/soldiersfootmili00munsrich
Posted by Poncho at 6:27 PM

Why won't you buy a pair Merrell Trail Gloves and live happily ever after like the rest of our sect, or you like over-complicating things ?

Great post, Dane. Might I recommend the many shoes that Terra Plana offers. As I'm typing this, I'm at my standing desk with my Evo's on, and I just love these things. My brother has some of the Ra's for a classier look, and he too is a fan. They fit beautifully and feel wonderful on my feet.

Both are good suggestions, thanks.

Complicated? I just found it rather telling that Russel has been doing something similar for 100 years based on an equally old military study.

They look ok for a casual shoe but the design is dated when compared to what I consider a minimalist shoe. The way I see it a shoe needs to be snug around the midfoot with an extremely wide toe-box and a sole so thin and flexible that you can count the pebbles under your feet. The only thing close to this other than the Trail Gloves are the Softstar Runamoc, my only concern is their durability.

Russel makes a good many shoes that you will be able to count even the tiniest pebbles under your feet.

My not be your style but imo worth opening your mind about what they are all about. I have no doubt if you had actually seen the right shoe from Russel you would understand it is a true minimalist shoe.

I'm sorry for being so close-minded but I looked on their site and their minimalist shoes look like regular dress shoes to me, and then I scrolled down and saw the pricelist....When they said minimalist they surely didn't mean the price :) . I understand why you support them but you can buy American custom made shoes from Softstar for 100 $.

This thread has been of much interest to me. I have suffered from some foot troubles ever since I did a 3-week cold temperature backpacking trip where I had to wear my warm boots with stiff soles and carry a heavy pack.
Since then I've been very careful about my footwear and have slowly gone more and more minimalist in design. I'm currently wearing vivobarefoot Dharmas whenever possible, but in VT my feet get cold in them easily this time of year when I'm outside. Plus they make terrible trail shoes.

I took the time to read most of the army study and found it very interesting.

The idea of custom fitted shoes sounds wonderful. Because the Dharmas, although the best I've found still aren't perfect. I agree with Alex that Russels are not the most attractive shoes out there, but they're really no less attractive than the Softstar shoes. And I don't see any option from Softstar to make you custom shoes, unless choosing different colors is what you mean by custom, Alex.
(Although the softstar Tesla/Keita slippers look like they may be on my wish list now.)

Dane,
How is the ground feel in the Russels? And how quickly is the special sole wearing out?

Hi David,
I have two pair of the Safari PHs in differing versions, both now almost 20 years old.

I added a double vamp and heel counters to both of mine for extra foot support on irregular terrain and for ground feel both could have had better soles. I'm thinking about sending at least one pair back for a resole with either the new smooth "grip rock" sole or the Newporter to enhance the feel under foot. Both are good now but they could easily be better in that regard.

But I'd suspect all the super thin soles to have good/sensitive feel under foot. The leather soled moccasins certainly do. And they get better as you break them in and mold to your feet.

From the write ups on their web page sounds like the both the "rock grip" and the Newporter are going MANY miles. I have the Huez on one and the lighter Gumlite on the second pair. Huez I have never liked very much. The Gumlite I do but wish it were half the thickness it is now.

I was thinking the Kalahari Tracker with a tightly trimed Newporter sole might be a pretty fun trail running shoe.

What are you thinking?

I was looking at the Kalahari Tracker too, they look great for a light, flexible shoe. The testimonials for them sound like they make a great warm weather shoe. I could see myself doing some trail runs in them.
I suppose I would have to ask Russel before ordering anything how those compare to their minimalist line of shoes because the Kalahari's appear very minimalist to me.
I'd be looking try something from them that I could wear as an everyday shoe as well as take on some easy day hikes.
If I were impressed enough, I'd probably begin to replace my other outdoor footwear with theirs as it wears out, or as I find the money for it, whichever comes first.
I have fallen in love with the soft soled shoes like the Dharmas. Aside from their inherent comfort, I feel far more balanced and dexterous walking in them than in board lasted shoes. I am just searching for the next step, something a little better quality and better fitting that can be used on trails as well as around town.
Thanks for the feedback.

I ended up sending a pair of my Phs back to have the rock grip sole added. Haven't pulled the trigger on the KT yet but that is really what I want. Their production delays and how they charge your CC is what is holding me back. 4 to 7 months wait with 1/2 up front. And I know from past experience they seldom get it right the first time. KT with a rock grip would be a fun trail running shoe around here when it is dry though.

No question you'll get you money's worth out of them eventually.

Hi there, I've just acquired a pair of Russell Art Carter's on the munson last and I really like the fit, but there's a good bit of heel slip, and I'm wondering if you've found that that goes away as the shoe breaks in...
Thanks,
Matt