I have a long history of using Eddie Bauer gear.  Longer than I can remeber actually as one the first down bags was I used was Eddie Bauer that I borrowed from my Mother on early over night trips to the back yard!

So the brand name was a household word growing up in Washington and Idaho for me. 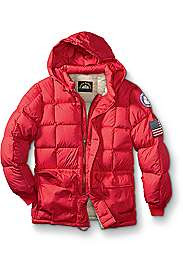 In 1977 there were better down garments available in Europe.  Moncler and Egge were two that were easily available in the US at the time.   I took my Monclear Teray jacket to Nepal the spring of  '77.   It was so obviously a better climbing jacket than the Eddie Bauer Karakorum we were supplied with. 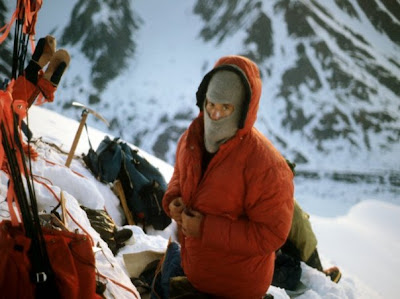 The Terray, after a open bivy, high on Mt. Deborah, Alaska, May of'76

Eddie Bauer sponsored and supported John Roskelley and I in the spring of 1977 for a two man attempt on Makalu's West Pillar. (the first two man 8KM permit given in Nepal)  John got ill on the walk in thankfully, as the project even today would be serious challenge for the best two man team. Although it does perk one's imagination doesn't it!

My friends John, Chris Kopcynski, Jim States and Kim Momb went back to Makalu in 1980 and after a concerted effort with fixed camps were able to put John, alone, on the summit. 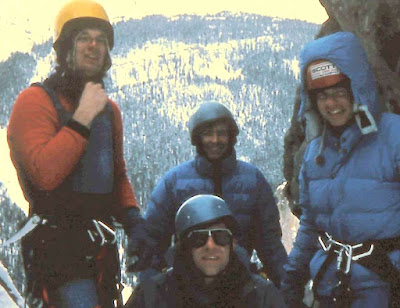 JR (back), Kop (center), Kim(right) and myself  on top of Takkakaw '82.
Lots of down in the picture, none of it from Eddie Bauer

So while we all knew about Eddie Bauer and they did supply a lot of expedition support back in the day by the time I  was doing much all the EB gear was well dated.

In fact past the down sweaters I really wasn't interested in much of what Eddie Bauer was selling, until recently.

Funny story really.  Someone started complaining on an Internet forun (imagine that!) about the newest First Ascent Peak XV jacket.  And how they had washed it in a machine and the baffles had ripped apart. (imagine that!)   Even though the jacket had been given to him, shall we say "very well used" after an Everest trip and more.  Eddie Bauer's retail store honored the lifetime warrenty and gave him instore credit or a new jacket.  His choice. 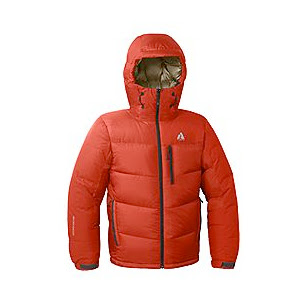 I was impressed by the warrenty.  So next time I was in town I made a point of stopping by the local Eddie Bauer store.  And didn't expect much.  What I found shocked me.  The Peak VX was the best heavy weight, technical,  down jacket I had ever seen.  With a price point no one could match.  I ended up buying 2 that season...one as a spare as I figured the price would never be equaled for what I was buying.

A couple of years later and my mind hasn't changed.  The original Peak XV is still the best, heavy weight, technical down jacket I have seen or used.  The second version isn't bad either.  Lucky for us both versions are available.    The Peak XV is a good start.  Eddie Bauer now has all sorts of different clothing pieces that are exceptional values.  Mind you not all of the First Ascent gear is...but some are simply amazing, no matter the price point compared to value and design.  As I get the time I'll write up the gear from Eddie Bauer that has truly become "go to" climbing and skiing garments for me and my extended family.

If I were to go back to Makalu tomorrow this is the jacket I would take. But it is not a jacket most will have a use for.  It is simply too warm. 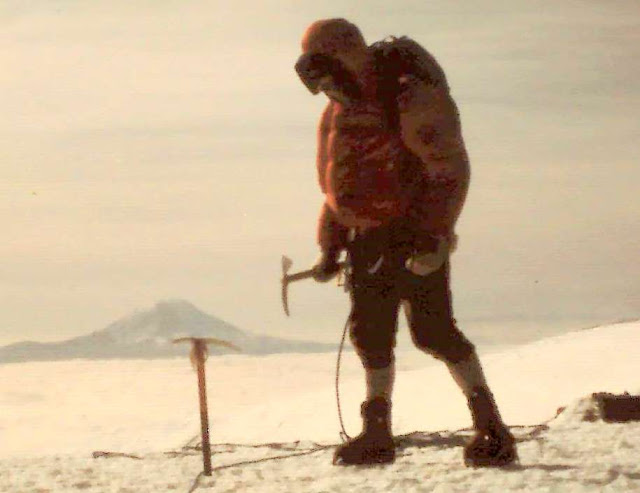 But it would work just fine in fall/winter on the north side of Rainer as well.  Ptarmigan in Oct. '75.

More here on my thoughts about some of the most popular belay jackets:

Alex,
I have, it is NOT. While intended for the same environment the R&I isn't even in the same ball game as the XV. It is old technology. Which is why it didn't even make the first review. Be like adding the old Eddie Bauer gear tot the review. FF is local and I know many who work there. I took a lot of heat for the negative comments about FF jackets and the Patagucci. I stick to the same comments today as nothing has changed.

RAB was one I didn't test early on and have been very pleased with in a mid weight down.

The Narrona is worth the extra coin at that weight though and still the highest tech jacket you'll find. They also have a bigger down jacket, which like the Mamutt is worth looking at if the XV isn't available to you.

But the XV really does stand head and shoulders above all of them as a technical cold weather climbing specific jacket...then you look at the price and it should be a no brainier.

Something I forgot to add. The XV has likely been used on more Everest days now than the R&I by a huge margin.

I'm not a big fan of RMI but their guides were involved in the design of the XV and their experience shines through on the XV. Which is why they persoanlly use it and reccommend the jacket so highly. (plus they work for the brand name)

Obvious to me someone who has spent a lot of time in cold technical enviroments sorted this one out. It really is the best heavy weight down jacket I have ever seen.

I am wondering what suitable alternatives are out there for the Peak XV jacket? Are the Marmot Greenland and RAB neutrino plus good substitutes or do serve a different purpose?

I had a pro deal with EB/FA and for the most part I am left with a really lackluster impression of their softgoods. I owned most of the FA product line last spring and the only piece I have left is the Igniter (My wife has the Frontpoint still). I didn't buy the XV because at the time they had just released the new version and I didn't have a need. Overall it seemed like they used top of the line materials, with impressive F&B but the execution was poorly thought out (like single zippers, neoprene cinches, pantlegs without eyelets or draw cords, etc).

Just my opinion but there's a reason their stuff it cheap.

There are a few others in this weight that are climbing specific, RAB Nuetrino Plus is one, the Norrøna Trollveggen and the Mammut Rambler come to mind off hand. All great jackets btw.

I don't get a pro deal on the EB gear but do buy it on sale as required.

Two of their better pieces of gear the XV and the Frontpoint I have stacked up against the best recently and still think they are golden.

EB has some funky stuff I'd never buy. But they also have some pretty slick stuff like the new BC Microtherm Jacket. As always YMMV.

I was talking about their hardshell pants with regards to the eyelets and it looks like they have added them for this season. The FA softshell pants already had eyelets but they didn't fit me.

One of my climbing partners has an XV jacket and it looks like a homerun.

To anyone that is looking for a really good climbing specific down jacket, I would suggest to look at either:
http://www.sirjoseph.cz/index-en.htm http://www.montane.co.uk/

Dane, can you clarify something, is EB/FA now making the original and the new version of the XV?

No clue what they are making currently but at the moment they have both available and both on sale at their web site.

With limited sizes in black but a full size run in red.

The PHD Delta is a great jacket. No flies on it. Difficult to get in NA but a great jacket none the less. The PHD is 376 English pound, The XV is every bit the jacket as the PHD version but $299. That makes the PHD twice the retail but certainly not twice the jacket by any comparison

Valandre makes the "Immelman" jacket that may equal or surpass the XV jacket in technical performance. The only bad thing about the jacket is that it cost an arm and leg to buy.

Dane, you stated that the 1st generation peak xv is superior to the 2nd generation. Can you explain the differences please?

New versions (now the third) have added weight by changing the shoulder/arm material to a heavier Cordura over lay. Biggest improvment over the old is the newest version now has usable large inner mesh pocket.

So added weight on the new one. Bonus is they added a pocket..but should have added two. I still like the original better. Take a look at the MH Nils and the RAB Nuetrino Plus as other options.

Thanks for the review. I am still a broke college student and the price of this jacket is very appealing to me. Even at the patagonia outlet, the price for jackets much smaller are almost double.
Is this overkill for Rainier and Shasta? Those are the mountains I am currently climbing and building my skill set so I can graduate to bigger colder mountains later on.
Also, what layers do you usually use under it?

Over kill? yes ;) Layers under it? Everything!

Nice jacket if you cna find them cheap. But it is a LOT of jacket you'll likely seldom use as intended. Do a search for layered synthetics. Money better spent IMO. Good start here:

Thank you for the reply! And thank you for the link as well, it has been very helpful. I have been using 2 heavy wool sweaters and then a really large, heavy hard shell for layering and I am looking to upgrade my whole system piece by piece. I have a 40% off coupon for my local patagonia outlet so I will see what I can find there.

I forgot to also mention that I am visiting my parents in Switzerland in the winter, and am planning on doing some climbing in the alps. The lowest price I can find the peak XV is $370, so I will take your advice and skip it. In the mean time I will look out for deals, hopefully something will come around before winter.