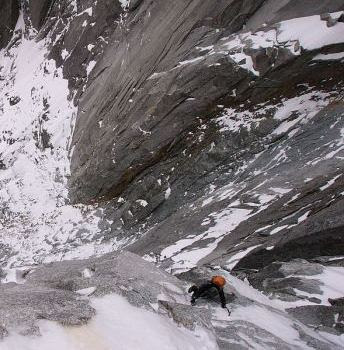 High in the Dru Coulior
all photos courtesy of Dave Searle

This is Dave's first gear review on Cold Thistle, but hopefully not the last.   Dave and a few other Brits are living and climbing hard in Cham.  Likely more good alpine climbing done in a typical weekend there than in all of the USA every winter.

I respect the opinions of climbers out there and actually doing things.   Ally, Jon, Will are a few I met in Cham last winter that are "doing it".   Dave is right in there as well.  His opinions are hard earned and worth the read.

You can read more about what Dave is up to here:


I have been using my Scarpa 6000 now for about a year and on the most part I have been really impressed with them. 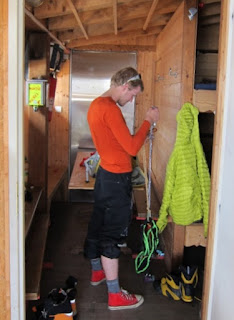 Dave in his red chuck hut slippers, Spantik and 6000 at his side.
General Design and Features

When I was first on the market for a pair of winter boots (and this was my first pair) I was strongly recommend by lots of people to go for the La Sportiva Spantik. I tried them both on in the shop for hours, in different sizes and came to the conclusion that the 6000 fit me slightly better. This was perhaps the main reason I went for them in the end however I also prefered the design of the 6000 too. They seemed to be more nimble and precise and I prefer having a gaitered boot any day of the week as it keeps them drier when your wading through snow and it means that the laces aren't subject to any wear. The sole unit it thinner than on the Spantik which sacrifices warmth but gains precision.

I had a slight problem with heel lift after using them maybe three of four times. I didn't have this problem in the shop and it was strange that it developed over time. I have rectified that now with sticky back foam stuck to the liners around my heel and a heel raiser to lock my heel into the back of the boot. I would have probably had this problem in any boot as I do have particularly narrow heels. Now they fit like a dream. If your set on these boots then it is worth remembering that if you have a low volume foot like mine then they can be made to fit.

To start with I was a fan of the lacing system, it seemed easy to tighten up and easy to use with big gloves but I pretty soon realized that the locking cleat eventually works itself loose after a few hours of climbing or walking. I originally combated this problem by tying a normal shoe knot over the top of the cleat but now I have taken it off completely and now I just use a reef knot to fasten them. I never feel the need to adjust the laces when I'm climbing so now when I'm tying them in the hut or at the bivi I use a knot that won't come lose and this seems to be the best option for me. I think the lacing system could do with a rethink in my opinion as I have had other friends who have had similar problems with it. Perhaps a beefier cleat or thicker, less slick laces which are easier tie?

I have been really impressed with the warmth of these boots as well. I thought that they weren't going to be as warm as a Spantik but I have since realised it depemds entirely on your circulation and the fit as to whether or not you'll feel the cold. I have sat two nights out in them without a sleeping bag and I didn't have any major issues. The first and worst of the two was on the Colton/Macintyre on the Grandes Jorrasses. Me and my two buddies got benighted at about 4300m with only a two man man bothy shelter and half a karimat to share. It was November here in Cham and the ambient temperature was close to -15C and felt much more with windchill. Jim and Gav both had Spantiks and I was in my 6000ers and I was really worried about my feet but the only option was to sit and suffer.... which we did.... for 8 hours. The night passed slowly and I emerged with very minor nerve damage to my big toe (phew). Jim had the same and Gav was fine. I don't think the 6000ers are as warm as the Spantiks but if you have good circulation then these should be fine for what they are recommend for (winter alpinism and greater range climbing up to 6000m). I think my circulation is average and for most of the climbing I have done with them (alpine north faces in autumn and spring) they have been spot on. Light and dexterous enough for mixed climbing, warm enough for the kind of temperatures you encounter out here and stiff enough to plough up a 1000m of ice without your calves exploding out the back of your trousers. 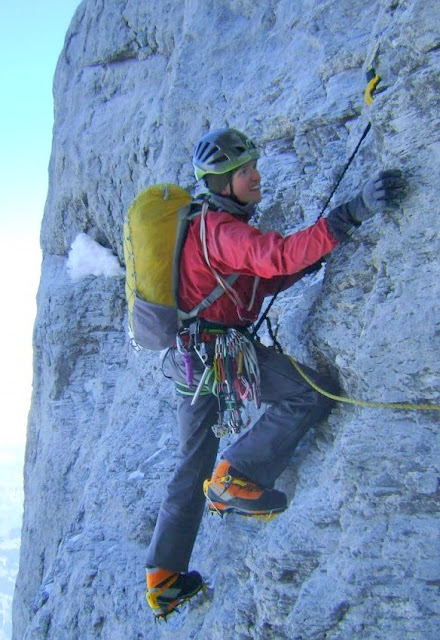 They haven't shown much sign of wear yet. I had a small nick in the orange fabric after their first days use scrambling over sharp granite boulders on my way up to the Carrington/Rouse on the north face of the Pelerins. I though that was going to set the tone for how they were going to fair but that is the only damage they have sustained in the year I have had them which I think is pretty impressive as I have done some long approaches on sharp granite moraine, mixed climbed in Scotland and they have been up six 1000m+ north face routes as well as a load of shorter mixed routes.

One issue that I encountered with these boots was getting my crampons to fit. When I first got these boots I had a pair of plastic bailed G14 (older version). I strapped them on and started off up without really paying a huge amount of attention to how they fit. I felt pretty insecure on the first route and it was only on closed inspection when I looked at the set up that I realised the front points were only forward about 5mm or so from the front of the boot as supposed to 25-35mm as I would normally expect. I worked out that it was because the sole unit is really narrow at the front and it doesn't hold the crampon far enough forward. So back to the shop I went for a new pair of crampons (G20s). It was a hungry month after that! So be warned check your crampons on them first.

In an ideal world I would change two things about these boot.

1. I would make them tighter around the heel to combat heel lift. It might just be that I have really skinny heels but some other guy's I know who have them would say the same thing.

2. I would change the lacing system to something more reliable. Its pretty frustrating having your boots come undone on you when your ankle deep in snow, trying to hop about getting them done up again.

All in all they are really great boot, and have definitely become very popular out here in Chamonix and for good reason. After all Ueli Steck was the main man behind the design of these boots and he knows what to look for in a good boot! I'd change a few things like I've said but I'm really happy with them and if I was on market for a pair of winter boots again I'd make the same choice. 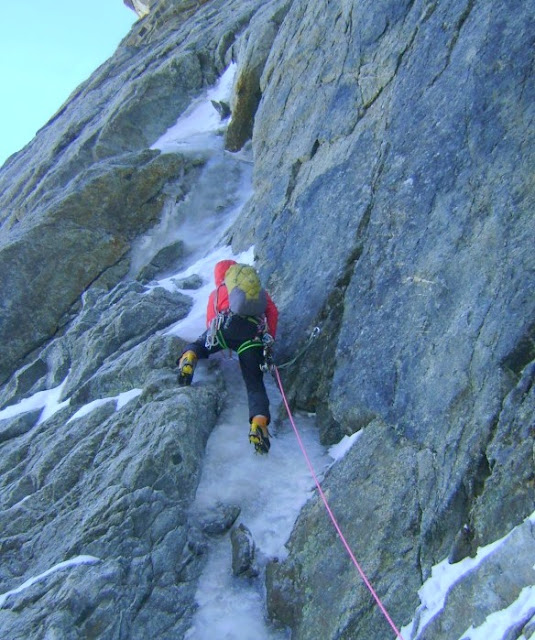 Colton/ Macintyre on the Grand Jorasses
Posted by Dane at 9:06 AM

I have a pair of Trango Evo Extremes and have used them often in the cascades in spring and summer. I will be doing some climbing in the Alps in march and dont know if my Trangos are will be warm enough. How much warmer are the 6000s compared to the Sportivas? Since you have used both and have climbed a lot in the alps what would you recommend?

That is an easy one. Nope :) The Trango series just isn't warm enough for the Alps IMO even in April and late May. Most use a double boot of one sort or another there for good reason. It is high and cold. Huge difference in weight and technical performance between the Trango Evo (one of my favorite summer boots) and any of the doubles available.

You don't want to spend an unplanned night out in the Evo. And most everyone does if they are climbing during the short cold days of March in the Alps, beginners and the seasoned vets.

Nepal Evo is kinda the entry level boot there in winter, Batura and Phantom Guide a bit better. The most common/popular boot? The Spantik by a huge margin. With the 6000 beginning to play catch up.

I have extremely bad circulation and seem to get cold feet in any situation. I currently have an old pair of Sportivas which seem similar to the Nepal Evos in both weight and warmth. Fit-wise, they seem good, but the toe box is a little narrow for my foot.

I'm looking for a boot that will do well on steep ice and alpine mixed, but is also very warm and not too heavy. Mainly it will be for day trips in the Canadian Rockies, but I am also hoping to take them to Alaska for a week or two at some point in the next couple years.

From all the reading I have done on your blogs, and from looking at the boots and trying on as many as possible, the best options seem like the Spantik, Scarpa 6000 and the Batura. I know the Batura doesn't have a removable liner, but it felt fairly warm, light and technical, and I'm wondering if I could make it work with a vapor barrier sock for the trip to alaska.

Any thoughts are greatly appreciated. If you had one boot to do it all and you had problems with circulation, which one would you choose (assuming fit was good with all boots)?

Im a size 47 and I'm having a hard time finding a size 48. Do you think I can get by with regular size or do you recommend bumping up a size for the Scarpas?

I'm usually a size 13 but I bought two pair from Amazon to see which would fit better the 13 or 13.5. Seems like 13.5 is the winner. I will take these up to Muir Basecamp in two weeks and give them a little test.