A "short" field test of the Arc'teryx Zenta AR gloves :)

Some times things just don't go as planned.  So you punt.  When I first heard part of this story last week I could hear the pain from my stalwart field tester Dave Searle through the trans Atlantic email.  If you climb you'll likely recognise the pain. 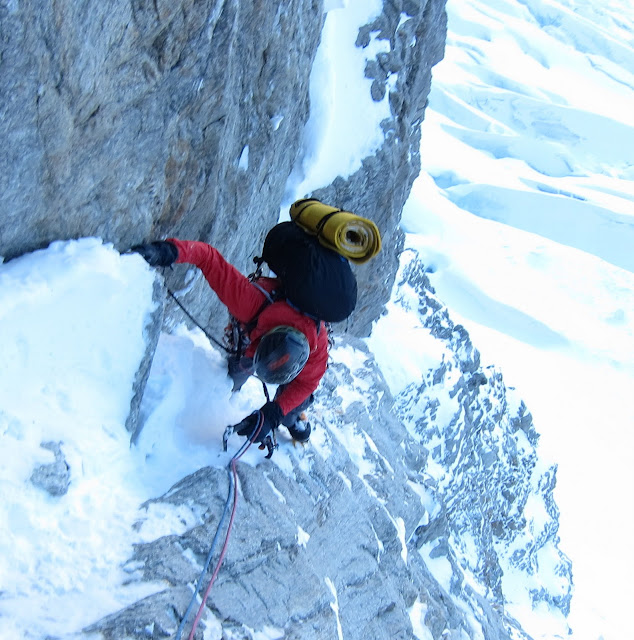 Dave on one of the ramps of the Desmaison/Gouseault on the Grandes Jorasses
All photos courtey of Ally Swinton
http://allyswinton.blogspot.com/
Dave's story:

"Gloves are quite literally the bane of my existence.....

They are expensive and they always break........ if they make it that far, i.e you don't knock them off a Bivi ledge.

When I got a pair of Arc'teryx Zenta AR gloves off Dane I was totally psyched. On first impressions they looked really well made with excellent features. They fitted my hand really well and I was really impressed by how dexterous they felt for a glove of its size and levels of insulation and protection. I would never normally climb in a glove that had goretex and primaloft in it as I would ordinarily find them too thick to feel anything but when I first tried on the Zenta I knew that they would probably be a lot better than other because they are really well shaped and moulded to your hand. 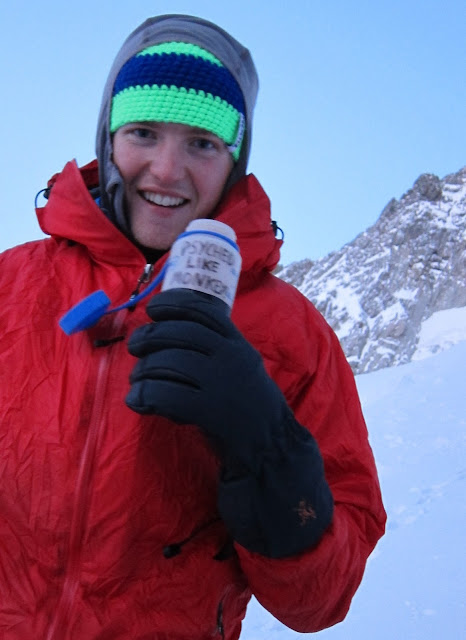 Gloves have a lot of expectations placed upon them. We expect them to be warm, light, strong, dexterous, neat fitting, waterproof, breathable and easy to get on and off.......oh yeah and well priced. I really like that Arc'teryx hasn't conformed to the normal regime of making cheap gloves. They have put more money into the technology and precision manufacture and passed the cost onto you and me - the fussy climbers. So often manufacturers build cheaper gloves that inevitably fall apart after a few routes or never really fit well from the start. I like that these gloves are out there filling the upper end of the market. Having said this though, as a climbing bum, I would really struggle to justify purchasing a pair of these gloves. They will get trashed at some point and any which way you look at it 160 euros is a lot for a pair of gloves that might only last for a few routes.

My last foray into the mountains was for the Desmaison/Gouseault on the Grandes Jorasses. This route is a long and sustained mixed route following a series of steep ramp lines and tricky compact rock sections that require some rock climbing and modern mixed climbing to make progress. 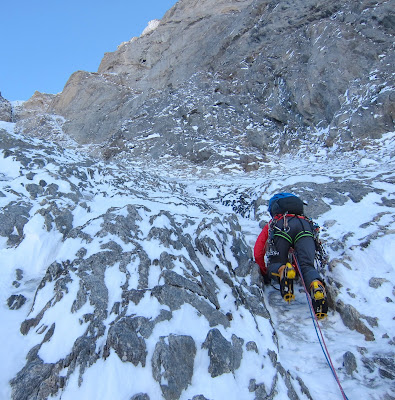 many meters of ice
It seemed to be the perfect time to try out these new gloves so they came along for the ride along with a pair of thinner gauntlets and a super thin pair for harder, drier pitches. I was so impressed by the dexterity of these gloves. I really thought that having primaloft on the palm was going to seriously affect their feel on my tools (petzl Nomics) but I found that it was only a minor issue and I could second all of the pitches easily with the Zenta's on as well as taking on some less technical leads. One thing that I did notice is that I can't fit all of my fingers on the handle which means that I have to push my index finger up onto the trigger to get a better grip to stop my fingers from getting crushed and cold. Not a major issue but it's something to think about when you're trying on gloves in the shop. I have my griprest to the medium setting nearly always as I would rather have more support when I'm using smaller gloves but this means that I can't get bigger gloves like these onto the handle. 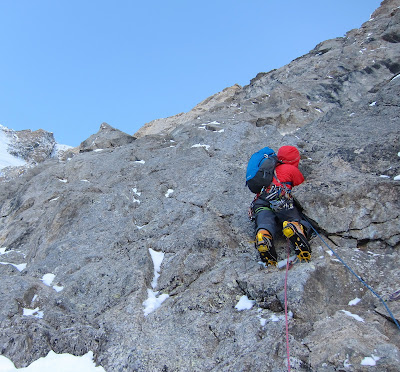 Bit of M6 high on the wall between mixed ice ramps

We had a good day out climbing on the Desmaison/Gouseault but it wasn't meant to be. Lots of spindrift slowed our progress down from the start and our heavy packs and lack of acclimatisation further slowed our progress up the face. When we eventually stopped for the night on the face (after 17 hours of climbing) we worked out that we were perhaps only a third of the way up the difficulties of the route and just under half of the way up the face. We realised that it was going to take a lot longer than we originally expected to climb the route and we knew we didn't have sufficient supplies (primarily gas) to make it viable. We found a good bivi site and settled down for some food and sleep. I managed to drop two things off the ledge that night. My Jetboil cup and the right hand of my Zenta AR gloves. Guess which one I found at the bergshrund the next day when we bailed off the route? I definitely would have preferred to have found the glove.

I was really angry at losing such a great glove as I had had a lot of fun climbing in them for the limited time they were with me. They kept my hands warm and snug and dried really quickly inside my jacket when I took them off. The draw cord is perfect, no other way of describing it, and I was surprised by how good they were for manipulating gear. If you're on the market for a super warm, waterproof glove then I would really recommend you take a look at these. If you're serious about your climbing then the extra money is very well spent and for what you get (probably the best designed and manufactured gloves of their type on the market) then they are a good deal. It's a shame that I didn't get to use them for longer to see how they would have lasted but c'est la vie. I suspected that they would have done pretty well as the left one (the one left) shows no signs of wear yet and they got a hammering on Jorasses. Oh and Arc'teryx perhaps some idiot loops might be a good idea but apart from that, nice work, I'm impressed!"
Posted by Dane at 11:17 AM

I'm wondering if these gloves would work for ice climbing? The waterproof-ness is definitely a plus and would help a ton. Are they dextrous enough to work with gear while wearing them?

For general mountainnering, and little ice climbing, which one is better, Alibi II or Zenta AR? Price is same...

Likely the Zenta for the extra warmth.

By the way you can get a pair at theclimb.com for $75. Just used your review as a reference and pulled the trigger on them.