I've been asked several times what the difference between the new Petzl ICE and DRY picks are compared to the older Nomic Astro and Cascade.

Both of the newest picks are now T rated  instead of the older style picks that were B rated.  Still  with the same 3.3mm tips on the DRY and Astro.  And 3.25 on the old Cascade with the ICE at 3.3mm.  None that I have examined are the 3mm claimed by Petzl.

More on picks and ratings here by Andy Kirkpatrick:

"All technical tools these days sold in Europe must pass minimum CE norms. The shaft of a technical tool must pass the T (technical) test, guaranteeing a minimum strength of 350kg. This is carried out by applying a load to the shaft as if it was being used in a snow belay, which although far from practical - after all you'd be hard pressed for an axe belay to hold more the 35kg - does mean that when you're jamming the shaft into cracks and standing on it, it should be up to the job.


Of far more importance is the pick rating, which is either denoted by a 'B' or 'T' stamped on the pick. The 'permanent deformation' test does not necessarily relate to practical application either; picks are clamped in a vice, a lever of 330mm (often the shaft of the tool itself) is used to apply 42 (B) or 60 (T) Newtons of force for 60 seconds. At the end of the test period the lever must not show more than 70mm of permanent deflection from its start position.

Unfortunately, most picks that are noted for their 'high performance' are B-rated, which suggests a contradiction between the best performance and the greatest strength. The 'cyclic fatigue' test applies only to T-rated picks, which must endure 50,000 flexes at the end of a 250mm lever in order to pass. What this means to you the climber is that B probably stands for 'bent' if used for full on and intensive mixed climbing, while T stands for 'Tourquer', aimed at some serious twisting.

The big changes for Petzl are on the the tooth profile of the newest picks.  I find that they hook better and are also more difficult to clean on ice because of the first tooth change and more defined teeth.  The original Nomic Cascade and Astro picks will work fine with no changes in all three of Petzl's newest tools, Quark, Nomic or Ergo.   Still great picks.  Little change in actual strength past the new CE rating.  They were relisble and durable before and are even more so now.  I've seen bent Petz picks from the past generation.  All bent  indoors mind you.    But I have yet to see a broken one.

When we are discussiong Nomic picks, old picks fit new tools, new picks fit old tools.   Same with the new Quark and Ergo.   Old picks will fit the new tools,   New picks require a spacer...which is a major PAIN to replace in the field if you use Petzl's spacer.  Buy the old Astro or Cascade if you need to carry spares and think you'll break or bend a pick or need to replace them on a climb. I like the original Cascade pick design with the weights on pure ice. Fine a hardware store washer and fit it as required to use as a spacer before you take the tools climbing.


Cascade and Ice picks show in comparison.  The differing tooth designs do make a noticeable difference in actual use.  First tooth the most.  DBl click to enlarge the photo for details. 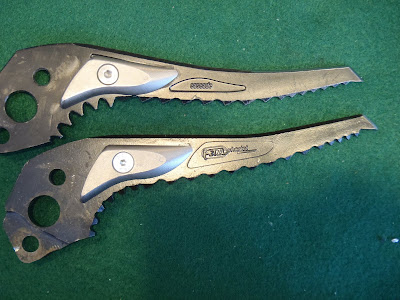 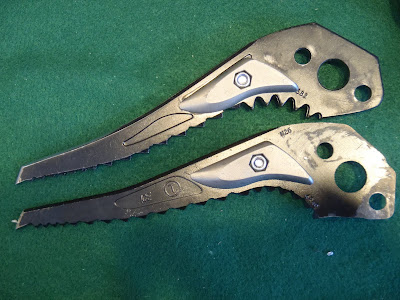 The Astro and Dry picks...are how ever very similar with the exception of the larger front tooth. 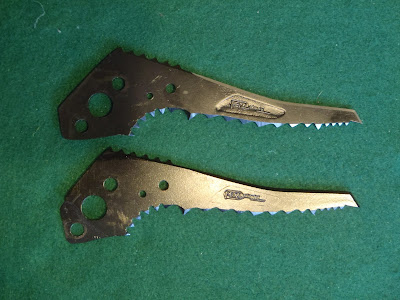 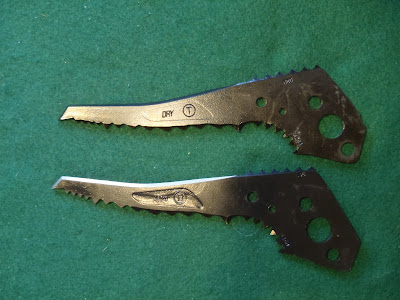 Update!
2/17/2011
Just when you think you can sleep soundly again something is bound to pop up.  This week it is broken Black Diamond Sabertooth crampons  Uneasy on that topic at best.   If i had more time I would look for more info on that issue.  Instead I'm taking mine out on some ice.  You'll here the bitching at home behind a closed door if I break a pair...trust me.
But back to the Petzl pick issue and why an update?
Turns out there is some clever mods going on at Petzl that are unspoken.  Can't figure out why a company would do a change and not make it public.  In this case I think it is a big change.  Besides the T rating and the extra long front tooth on the picks.  Petzl has also changed the pick angle on the Cascade not Ice ice between 2 and 3 degrees.  It is a big deal.  I noticed it climbing on them in Bozeman in early Dec.  Just figured it was a change in the teeth.  But it isn't.    BD went to less angle on the shaft of the new Fusion.  Petzl changes the pick angle so all the tools will have a deeper angle...Nomic (old or new) Quark and Fusion.
Some how I wasn't asked.
Top is an exact over lay of the Cacade on top of a new ICE.
Ice pick in the middle and a Cascade on the bottom of the picture. 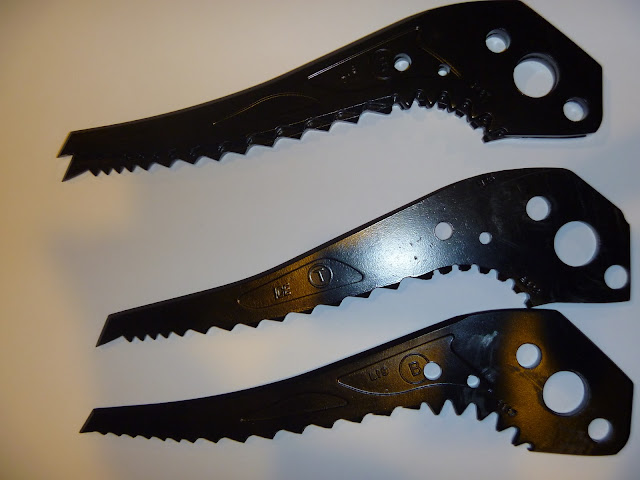 Close up in the over lay of the 2 or 3 degree increase of pick ange and extra hook.  Cascade on top ICE underneath it.

New ICE below that and a Cascade in the bottom of the pictuure. 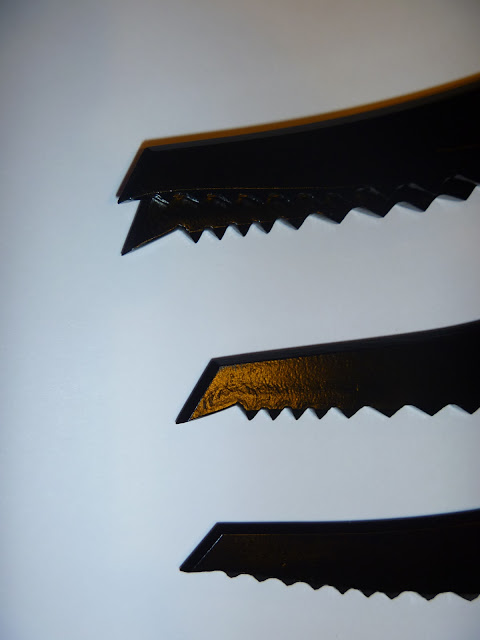 Are the cascade picks still available or have they been completely discontinued and replaced with the new ice pick? If they have been discontinued, are there any outdoor retailers that still have them in stock? If so, I probably should stock up on them! Similar to you, I like the cascade pick for pure ice climbing.

Sorry Larry, no clue on either. I bought all I could afford of the Cascade picks some months back and not sure any one has spares at the moment. But Petzl says new picks are suppose to be available again mid March.

FWIW, I've found the new Quark picks to be VERY sticky when trying to clean them. I'm not ordinarily much of an over-driver, but I've stuck my new Quarks a couple of times in seemingly ordinary placements and they've been a real bear to clean.A bit of file work has improved things, and all in all, I find the new Quarks to be phenomenal tools.

Dane,
Thanks for the informative and great posts. I just purchased a pair of new 2011/12 Nomics and was wondering if Petzl has resurrected the Cascade pick or a replica by now? Also, the Pommel issue has been resolved on the 2012 models correct? Thanks again for all the great info!
Jim C. Boulder, CO