Can you date this axe?

Here is an interesting axe.  Grivel for sure.  Pre 1980 but how pre 1980?  50cm and looks unaltered except for some sharpening.    I asked Grivel for a production date. 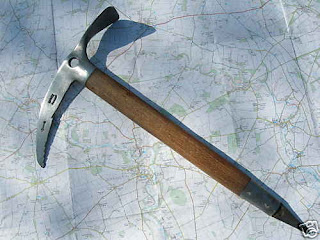 This week I was told Grivel was offering a similar axe as early as 1970.  Virtually the same time as Chouinard had his Piolet available, which was late fall of 1969 by Doug Robinson's recollections.  I'll look into that further.

"Certainly by the next catalog the date of introduction of the Piolet is listed as 1969. And by October of that year Yvon delivered to me on the edge of the Palisade Glacier the hickory-handled 70 cm one (and that hand-forged Alpine Hammer) that we put to good use on the V-Notch the next day."
Doug Robinson,  Jan 2 '09

The Grivel axe is a 45cm. not a 50cm.  Really short for those days.   Teeth and 2nd notch along the pick blade are all original.   Import date into the USA is unknown at the moment but first varified sighting of something similar in the USA was Sept. 1970.

"I first saw the axe in September, 1970, at Dakins Vermont Shop where Vermont products like cheese and maple syrup were sold. Helmut Lenes had a corner of the shop where he sold european climbing gear.  I didn't buy that axe because it was too expensive and weird looking. Too short and too curved." JB

But I suspect, this and another story I am working will put a couple of long standing ice climbing myths to death.
Posted by Dane at 8:21 AM