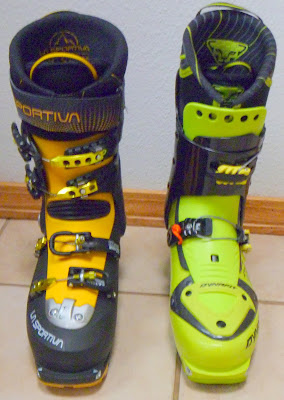 Two AT boots I am enjoying very much at the moment.
But much closer than I originally thought for weight.
La Sportiva Spectre on the left. Dynafit TLT 6 Performance on the right.


Part of the attraction for me to the TLT6 is the tinker toy effect.  You can change the boot's performance by adding or taking away parts to ski virtually any ski and by doing so adding or subtracting weight. 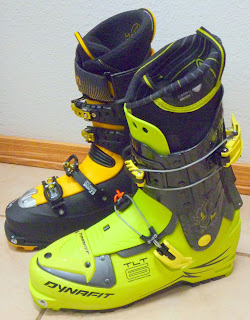 I have been skiing my TLT 6 recently in what I consider a "lwt alpine mode".  The heavier and very comfortable CR liner,  green tongue installed, no power strap, and I switched out parts of both buckles to make the boot more user friendly first and drop a gram or two on weight second.  I am very pleased with the performance of the TLT6 set up this way even on a 116mm wide ski under foot while skiing lifts.  The SIX is well up to the task and then some if required.

Weight of the TLT 6 in a 29 shell as I am skiing it right now is 1480g with a full length Superfoot Cork foot bed installed.  Add the Dynafit power strap and the two bolts need to attach the strap and you are up to 1520g. 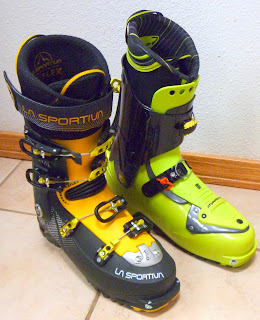 The La Sportiva Spectre is a step up on the TLT 6 P in skiing performance.  Even if you add the black tongue and the Dynafit power strap and resort to the original buckles in terms of ski boot the Spectre still has a leg up on the down.   Certainly close to the SIX's equal in walk mode.  And for my own technical climbing may be the Spectre is even a better climbing boot than the TLT6.  Which is hard to fathom for me at the moment actually.   And this from a guy who hates climbing in ski boots!

Weight of the Spectre in a 28 shell as I am skiing it right now is 1530g with a full length Superfoot Cork foot bed installed.   Pull the front two buckles as I am wanting to use them as a climbing boot and you go under 1450g.

So many really good options these days for the skier who climbs or the climber who needs to ski.  Nice to have boots that you can so easily mod to fit your next mission.

Maybe I'm missing something, but what about the spectre sans junk strap? How much does it weigh, and does it affect the skiing performance significantly?

You're on your own for that info Josh. Didn't get the Spectre just to strip it. That is what my TLT is for. Guess you'll have to buy a pair of Spectre and find out.

Is the lasporiva boot any wider in the front foot than the tlt6?

If so not by much.

Well, here's some random SOC: Tried on the Mercury: Terrible fit. Worse than the box they came in. Moved to the TLT 6 size 29.5: Awesome fit but concerned about cold feet in places like Denali, winter in the rockies etc...and price. Great walk mode, STIFF! 28.5 was too small and 29.5 has plenty of room for toes. Mestrale RS size 29: Incredible fit. Wow, almost as good as my dedicated resort boots. Hug my ankle, need the tighter locations on the upper buckles than what stock settings offer, wide toe and forefoot but toes are up against the liner. Like this boot a lot but concerned about weight and flexibility. Think that baking the liner will free toes. Spectre: Similarly good fit with a slight hot spot on the ankle which went away and 6th toe which would hopefully go away with baking the liner. Didn't notice the fit issue at the top of the foot others are having at all. Like the boot cuff height the best (highest), great walk mode, nice flex (jury still out on stiffness), toes are free prior to baking. Intended use is all things backcountry including steep ice (say WI3 max) from 10 day tours in california's high sierra to expeditions in AK to single day climbing and steep (55deg no problem) skiing. Note, resort skiing is not even a consideration for these. My current thought is that if the spectre fits when baked, that's the one. But wondering if I should just ignore the weight difference and flexiness of the RS and go for the obviously cozy one. Worried the RS is not going to climb well, be too heavy and too flexible. Coming from the latest Garmont megaride with lots of bootfitting mods - still get blisters, toe bang and the flex is just funky. Want to lighten up and modernize.

Spent most of last year in the RS. Nice ski boot. That coming from/using a TLT5. Ski boot not a rando boot for me. But really nice ski boot none the less.

Spectre and TLT6? A tough choice between them. Both inners need to be molded IMO to get full value. La Sportiva has a warmer and nicier liner. Either is warm enough for Denali. TLT5 had been there many times now. Not sure on the Spectre but I's bet on this Spring if not. Advantage weight if you strip the 6. Advantage Spectre as a climbing boot for the better walk/climbing mode.
$600 or $1000? I know which one I'd have if it was a question that boiled down to the $.

Maybe this is obvious but which has the advantage for ... SKIING between the Spectre and TLT6? My thought is TLT6 is much stiffer with black tongue, but that may not be the end all-be all for downhill performance? Both are a little more upright than I would like with 18deg forward lean being the max available...Prefer the 20 on the RS or even more on my megaride (esp post boot fitting shenanigans). It appears it's going to be hard to demo the Spectre around here.

Oops...To quote you above "The La Sportiva Spectre is a step up on the TLT 6 P in skiing performance." Right, reading comprehension...Really?

OK, one more. You never talk about the Mercury?

I like the ONE more than the Mercury. SO I have written about the ONE instead. I think it is the boot that should be getting a lot of greta press. Not a fan of a really stiff boot these days for lift sking and even less so in the back country. Even on 110+ skis. At 100+ I dont't need a lot of boot. At under 90mm even less so. I use a PDG or a stripped TLT on the less than 90mm, skinnier skis. I do however want a progressive forward flex on the boots. One..the TLT6 set up they way I want it or a Spectre all are a progressice flex. I am sure you could do much the same with a Mercury. I just haven't bothered yet.

I picked up a pair of Spectras yesterday after doing a ski tour in my old Garmonts and getting another blister. I do not know why but one day the Garmonts are fine and the next day I get a blister. Anyways I have been waiting for the TLT6 to come out and hoping that they had a wider foot than the TLT5. They have made the toe box a little bigger but not the rest of the foot bed, so alas the TLT6 are also not wide enough for me. I will be taking the Spectras out tomorrow as my blister is killing me today.