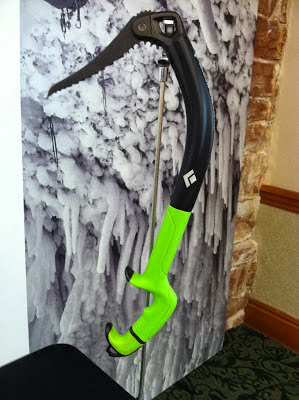 I haven't seen or played with a pair in person yet but my guess at the basics having seen earlier prototypes, are:

Slightly lighter in weight than Fusion (no hammer on the Fuel so a given I suspect)
Better balance by ditching the hammer.

Assuming from the BD comments as a "more all around/better ice tool it will be delivered with the current Fusions "ice specific" optional pick.  2 degree drop in pick angle is going to climb like/will be closer to a Cobra than a Fusion.  Numbers don't lie.

Looks to have a more open pommel for your little finger, which will better the rotation for ice. (hopefully it is more open..just guessing by the pictures I have seen)  Might just be an optical illusion however.  Reference Raf's comment below.  Grip/spike design has always been solid.  I'd be surprised if that basic design was changed much.  Hand grip angle looks changed a bit, steeper I think.  But it's a guess as well.  If so, it's really going to be interesting how that effects the over all angle of the tool handle, pick placement and and resulting use.

Lower profile spike than the Fusion (removable as is the Fusion's I'd assume).

All issues noted on the original Fusion @ its debut.

Retail is unknown but assume it will be comparable to a Fusion.  No clue when they will be available to the public.  Likely Fall of 2014 if they are presented at Winter 2014.  Long wait if you need new/want  tools this season.  Nice on BD's part to give us all sneak preview at the 2013 Bozeman Ice fest. 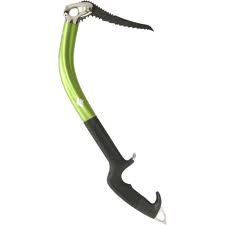 The current Fusion, the tool the Fuel is based on in part

I've climbed with the Fusion a good bit and written about it several times.  The Fusion isn't and wasn't intended to be a beginner's tool.  The Nomic is very versatile/  A good many climbers rightfully though/hoped the Fusion would be as well.   The "ice specific" pick has helped.  But the Fusion is still a full on  race car.  Not the family sedan.    If the design fits your needs, great.  If not, better to look else where for a ice tool to make everything fun.  If you throw/ envision a figure 4,  I susepct you'll have all this sorted out aready.  There are enough good tools out these days that you won't have to look far.  I suspect the Fuel is a 2nd attempt with the original Fusion design/redesign to gain some of the Nomic's obvious market share.

I hope they have succeeded.  Always good to have options!

Looking forward to trying a pair myself when they become available.  Keep an eye out!  There should be any number of good reviews coming from the sales samples BD is handing out right now.

Got to see & hold a pair and chat with BD guys at BIF about these:

Upon first impression they feel MUCH lighter than Fusion2, less mid-shaft balanced and weight more oriented towards head, rounded off pommel is nicer when swinging from the wrist.

At the festival, Ines mentioned she got to climb with a pair and was very impressed with their ice climbing ability.

There are at least two pairs floating around the valley... will try to climb on a pair!

It needs the option for a hammer!

Agree about the needing a hammer add-on. Something swappable a la petzl nomic? It doesn't look very different at all, at least not the groundbreaking radical new design I was hoping for. Yes, lighter is better, yes 2cm shorter is a good talking point, but will I rush out to buy these and retire my battle-worn, much-beloved Fusion2s? Nope. Will I continue to abuse the same tools until absolutely necessary? Yes. Yes I will.

Lighter is better, but it's not quite the groundbreaking change I would like to see in the next gen of tools from BD. Yes a couple of little mods are nice, but will I put my much-beloved, much-abused, battle-worn Fusion2s out to pasture and rush out to buy a pair of Fuels? Nope. Until they pry the older models from my numb fingers or come out with something a little more interesting and radically different, I will continue to swing, scratch, and fig4 my fusion2s until they snap into many pieces.

Without a hammer, it is an absolutely useless tool, except for screws-bolts modern mixed fashion close to the car routes. I am not a Nomic lover, but it's so obvious that BD try and try again, and fail and fail again and again trying to match the Petzl tool.

Check out this photo http://3.bp.blogspot.com/-Z3lz7jTSwCc/UtGvVs0eY-I/AAAAAAAADUI/MKO79sP3v1U/s1600/guillaumet+5.jpg
on Dave Macleod's blog (http://davemacleod.blogspot.com.ar/)

For what my opinion is worth, these are the worst BD tools made in a long time. I've been a BD tool user for many years now and I've used the Fuel for 6 days in varied New England weather (plus 4 days in Newfoundland). They were used only for ice, from WI3-WI6. Despite the good things some people are saying about the Fuel's ice performance, I could not get these tools to work well on ice, especially during cold conditions, and the lack of head weight makes them hard to drive into cold, brittle ice and hard turf.

They are shorter and lighter, and as a result feel tinny when you swing them. They are also the bounciest tools I've ever used. They are lighter so you swing them faster and explode low angle ice. Not a glowing review, I know.

The Fusion 2 is a better all-around tool and exceptional mixed performer, and the Nomic is far and away a better choice if you're choosing an ice tool that will climb mixed terrain also.