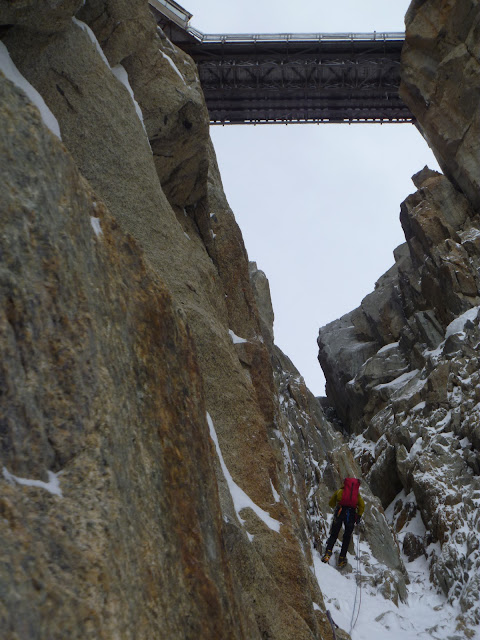 I get asked this a lot.

"What rope do you use and how long is it?"

These are my general comments and suggestions for alpine and ice use.  There is always an exception so nothing is written in stone.  I own a number of ropes just so I have options.

l have partners who prefer 70m ropes. But I've never ever seen a place we needed one over 60m.  The best they have done to justify the extra weight and mess is use a single 70 to fook up a perfectly spaced set of 50m belay and rap anchors.  Seems silly to me.  For a guy who climbed several decades on 150' ropes and found 50m ropes LONNNNGGG,  imagine what I think of a 70m rope?

Make the climb long, hard and scary enough and I might consider a set of 70m Twins a blessing just for the ability to do a longer rap.  It might just be enough mental support to keep me mobile and going up. 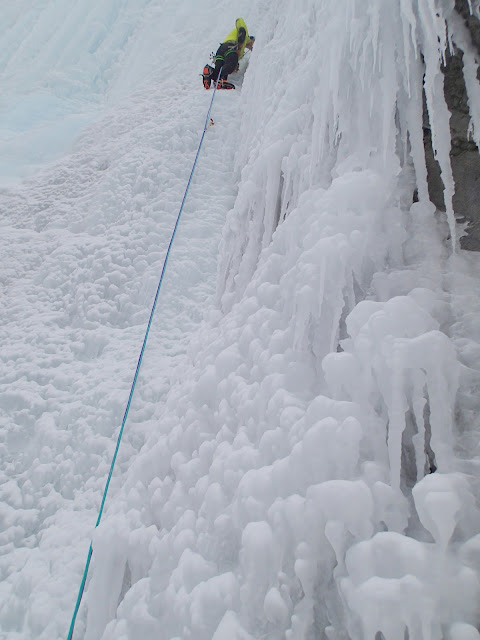 
Added useless weight imo.  But I do  own 3 70m ropes. The same ropes that seldom get used just for that reason. Too heavy to carry or lead with. 70m pitches turn out to be a really heavy rope imo.

I do own a 30m twin sold as a glacier rope that I use in the summer a lot and a 60m twin that I might double and use as a 30m twin as well.  I will generally but not always plan on simu climbing a good bit with the 30m rope set ups.  The tag line gets used the most as a 30m rap rope when soloing.  So I hope the raps are short! 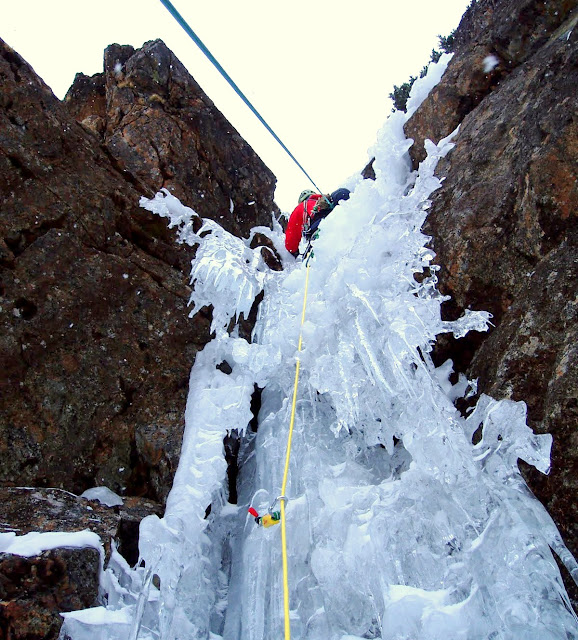 
Ropes are a system. Do a 150' free hanging rappel on a lwt single 9mm and a 5mm tag line and you'll figure that out quickly enough. And it isn't all that humorous. Any mismatched ropes aren't all that fun rappelling actually.  The smaller rope will run faster in most cases.  And a 7mm matched to a 9mm isn't much different.  Either way it is smart to check you proposed system first so you aren't surprised.  You'll also want to make sure your descending/belay device is up to snuff on skinny ropes. The most recent BD Guide wasn't on two big rappels I did a couple of times recently. The Midi bridge and off the Pencil on Polar Circus. From experience I can tell you the latest Petzl 4 version works a LOT better on the skinny Beal Ice Twin ropes. 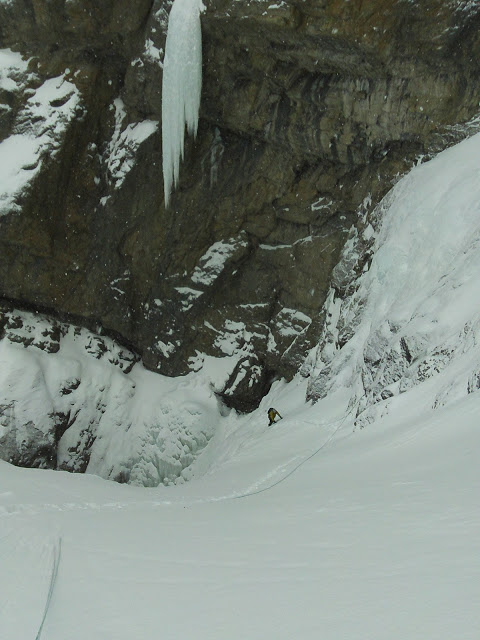 As you can see lots of tasty talk on ropes but in the end a set of twins at 10# 0oz is better than a a Joker and a skinny tag at 10# 2oz. Easier to split up and pack the twins, much easier to rap on if required. Easy enough to haul on one if that is needed.

Given a choice I'd rather just use a 50m (or a 60m) lwt single like a Joker if I am brave (I will not fail or have an accident and need to retreat) and know it is a walk off. But if you know you'll be rapping..I want to use lwt twins.  Double ropes BTW just tempt me into using one as a lwt single rope.  So I simply no longer buy them.  YMMV on that rational.

There are lots of good choices in ropes and rope systems. I happen to be using Beal ropes at the moment.  But it a very distinct and  personal choice, as I buy all my own ropes.  They are not given to me.  Just make sure you know why you have decided on your rope system.
Posted by Dane at 11:13 PM

And for anyone looking for a pair of light half/twins, the tendon master 7.8's are 10lbs for the pair (actual).

Never climbed or rapped 70m pitches? Thats the way of the mountains, I own multiple ropes but 70 half ropes are the to go set for big routes. Chopping through two feet of ice/snow extra times with your adze to make v threads for 60s will clearly prove this point.

I have both climbed and rapped 70m pitches. My point was I have never *needed* to climb or rap 70m pitches. Including big mtn first ascents. At some point overly long pitches anywhere just become inefficent.

Dane what do you think About half ropes here in EUROPE climbing in the alps, dolomites we mostly use half ropes it eliminates the drag and they are preetty light. I personally use edelrid merlin (8mm double rope).* i totally agree that 60m ropes are long enough.

Hi Andrej, Thanks for commenting. Helps to realise I am a product of my environment as well. I climbed a lot in Yosemite early on. And there a single rope with a tag was the norm..at least back in the day. Smooth rock and vertical crack systems promote a single rope system. It was the rare occasion we would even see dbls in use. Twins don't make sense there to me. Climbing big technical peaks made sense early on with dbls. In places where a dbl system eliminates drag they are the only thing that makes sense.

My comments/suggestions here are directed to smooth ice routes and not technical rock or mixed lines.

I really did mean it when I wrote "use the rope system that best fits your needs. Just know why you have decided on that particular system." 70m ropes are all the rage here...I've just never seen the need. 80m twins???! :)

Just climbed Point Five Gully on Wednesday on Ben Nevis with 60m twin ropes, Blue Water. No issues and felt a little sorry for the team behind us on double 50m's. Considering the spin drifts hammering us it was nice to know we were 10m closer to bring out of there. Also was able to run some of the pitches together. Just the same I think 70m would've been over kill.

For anyone interested in this topic I would recommend the outstanding book The Art of Ice Climbing by Jerome Blanc-Gras and Manu Ibarra. Buy it and read it. After I had done so myself I never climb on anything but half ropes.

First, I agree with your overall comments on rope length. There are however specialized situations where longer ropes make sense. Andy Lindblade & Athol Whimp used 90 m ropes on their impressive ascent of Thalay Sagar. If I recall his comments correctly, Andy felt it was a well-considered an important technique for their successful ascent. There was too little gear, too much space between good belays and the need to be able retreat fast was key. He admitted it was a pain to deal with all that cord, but worthwhile for the above reasons.

Locally, and on a totally different scale, I use 70 m ropes in the Catskills. They just work with a number of climbs. I've lowered off shorter ropes and been disciplined by the hill for lack of attention and rope length. I've heard that City of Rocks is a good place for an 80 m rope. The only point being there are always localized exceptions to every rule.