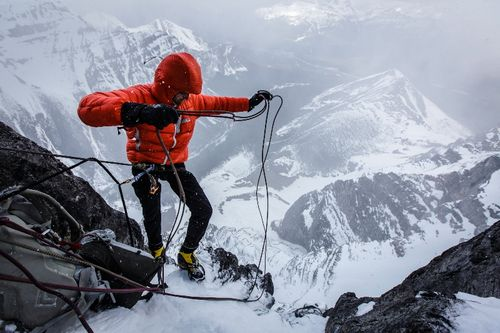 Two comments that took a few minutes to write and I thought worth repeating here with an additional link from Patagonia.

Patagonia and water proof down?

And more than that with Grivel athletes on soft boots. Grivel has just done a good job of keeping it quiet.

I don't know when the problem showed up @ Grivel. Fall of 2011 for sure if not earlier. I do know they have been up front about fixing it and warning the community. Never felt to me like they were trying to keep it quiet. Easy replacement, the repair/fix and warning came directly from Grivel as far as I was aware. The broken connecting bar was noticed in 2011, warrenty replacements available immediatly, a new improved part replacement available in early 2012. And every instance I have heard of, easily replaced free of charge on warrenty. Not what I would consider "keeping it quiet".

No excuse for original bad design work but a laudable effort to solve the problem for the consumer I think.

Thanks for pointing out the Grav Sport thread. I noticed it was from Feb 2013. The info, easy fix and warrenty replacement was already out/available a full year prior to that thread.

Interesting thread on gravsports. If Grivel did recall the crampons in Europe but not in the Americas, and retailers continue to sell the old faulty design that is pretty poor practice. My local shop has the old version available and the sales staff did not know about the critical design change.

Patagonia sold almost all the waterproof down jackets (at least online) so there will be a lot of pissed off customers if it degrades quickly.

(Not the first anon)

I know from experience last month that all it takes in the USA is calling Liberty Mtn (Grivel's US Dist) to get a a free pair of the "new" connecting bars on the way to you. Grivel Italy for the EU. Not sure what those poor Canucks are suppose to do if MEC doesn't have a ready fix for obviously faulty 'pons they have decided to continue selling.

How is it at all reasonable that retailers are still selling a faulty product that was recalled in one set of countries?? That's just negligence on the part of Grivel, Liberty Mountain, and the retailers.

Just because Grivel (or Liberty Mountain) will take care of you with new bars, that doesn't make it reasonable to sell a product that is known to break in the field. In a life threatening way!!

No arguement from me on selling known faulty gear. My question is who is at fault? Grivel, MEC, Liberty or your local retailer. Known problem and a easy fix for over a year. I would have thought this would be a NON issue by now. The Gravsport thread shows it clearly is not.

Grivel is now and has been for the last year or so offering free replacement bars to any that ask. I know Liberty is as well at Grivel's request.

The Gravsport thread is specifically about G20/22s bought from MEC as far as I can tell. Liberty Mtn Sports afaik does not sell to MEC but I could be mistaken on that. I know Grivel doesn't want a known faulty product in the field.

Ultimately Grivel Italy is responsible for the product. Thankfully, we can at least trust they will take care of the consumer.

OK? Reasonable? Not in my book but no one hiding from it that I see...although MEC seems a little iffy there.

Being that MEC moved swiftly to dealing with a Parking Ticket I got in one of their lots, I imagine that their problem would be more due to lack of communication/knowledge than irresponsible business practices. They've always been diligent in my experience.

I was one of the posters on the Gravsports thread.

It makes absolutely no sense to me that an organization as large as MEC seems to have no idea they are selling defective gear. This even after it being pointed out to them!

I could understand it if this was a new problem but if Dane is correct it's far from being something new.

Someone at MEC is not doing their job.

Needlesports in the UK has this on both the G20/G22 pages: "Now includes a set of alternative centre "Twin Bars", designed to cope with modern boots that have a large hollow in the instep."

That's a few retailers in separate countries that seem to have faulty information. At least Needlesports is including the new bar unlike MEC, but they are hiding that the fact that these crampons will break if used with "modern" boots.

Hard to imagine all these retailers are independently arriving at this situation.

I received an email notification from Mountain Gear yesterday advising me to inspect my crampons and replace the link bar with the updated design. Good on them. Glad some retailers are paying attention and reaching out to customers.

Very cool! Good on Mtn Gear for showing the way to do it right and taking the responsibility and effort! Bravo to Paul Fish and his crew.