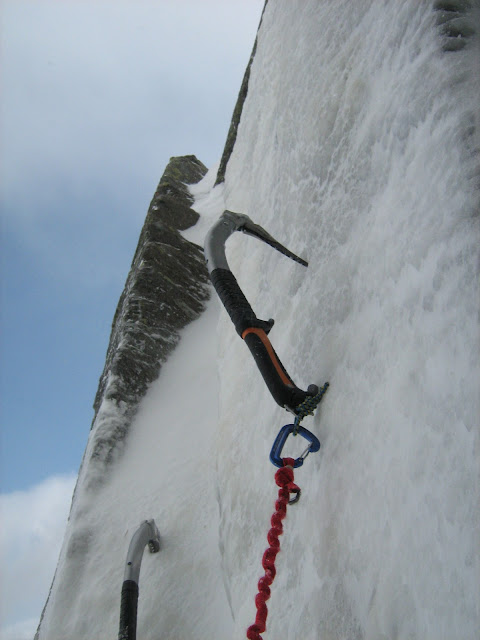 Michael:  Petzl Quarks with my homemade tethers. Soloing the only hard winter route on Mt. Washington. Note the 4mm cord attached to the spike. I found that the tethers clipped directly to the tool took away from the feel of the swing. The sound interfered with my concentration, also.

This is a guest blog from east coast climber, Michael Wejchert.  Hopefully it won't be his last.

More of Michael's writing and adventures can be found here:
http://www.farnorthclimbing.blogspot.com/ 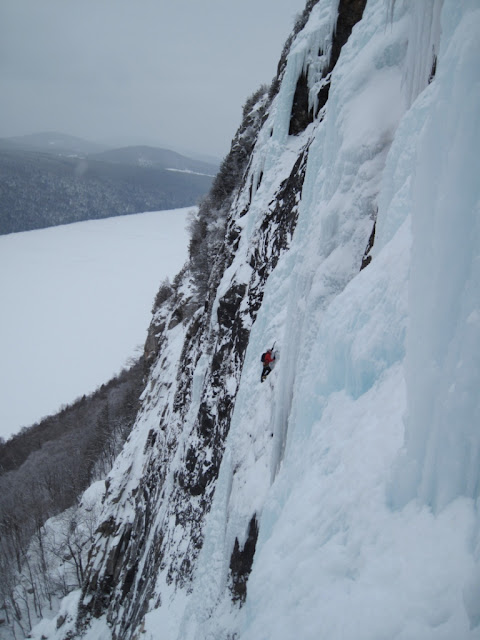 Me soloing the Last Gentleman with BD's,  Sketchy?

"Alpinist 8 had the north face of north twin issue, which came out my sophomore year at college. I think this was the first time I saw anyone going leashless alpine climbing. A couple of years later we had all gone
leashless alpine climbing. I remember Nils Nielsen showing me his prototype BD tethers in Alaska and I modified my old vipers and new Nomics to accommodate. I prodealed the BD umbilicals a couple years ago. I remember feeling liberated alpine climbing but especially soloing. Finally I didn't have to carry leashes for fear of dropping a tool.

For two seasons I soloed up to W15 with BD umbilicals, used them alpine climbing, and dismissed them totally when ice climbing. Then, roped up with my father on a WI3 I soloed weekly, I dropped a Nomic: bumped my knee cruising as quickly as possible and realized that in a lot of other situations, such as runout M5 or so, dropping a tool, even roped up, could spell disaster. I began to look into tethers with more scrutiny.

After a trip to Patagonia I also realized that almost all non BD athletes were climbing on homemade, strength rated tethers. Hmmm…

The first time I saw a Black Diamond tether come unclipped was my buddy Ryan Stefiuk’s on the classic cannon climb *Omega.* It wasn’t good timing—warm temperatures, ice coming down on a heady lead—not when you want a gear malfunction. Since then I have witnessed several BD tethers come unclipped on people’s Black Diamond ice tools. SO: a product that comes unclipped, isn’t strength rated (if you fall onto your tethers, they’ll probably break), and is 50 dollars retail? The thought of those little carabiners snapping was nestling deeper and deeper into my subconscious. 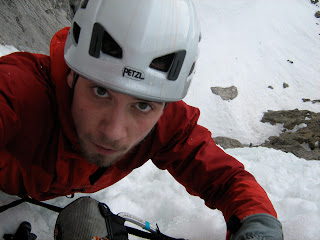 Soloing Polar Circus with BD tethers. 3 or 4 years ago now?

There is a massive difference between the demands of hard climbing and the demands of the casual user. Most people with disposable incomes are the latter, and oftentimes climbers have to finagle their own solutions to problems. I made my own tethers using strength rated webbing and Metolius mini-biners. No gimmicks, such as swivels, (which some people buy at the hardwear store), to get in the way. Alpine gear should always be absolutely necessary or have a dual purpose: I can clip my homemades in as daisy chains for rappelling, leave the mini ‘biners and cut up the webbing for bail cord if I have to. Another advantage. I made mine a little longer than arm-length to accomadate for twisting around on pitches. A good idea. 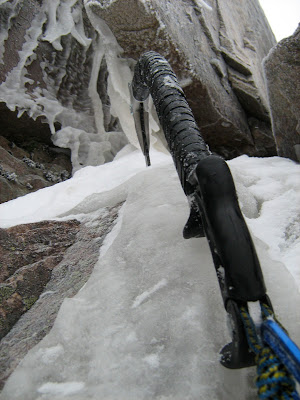 
This season I’ve climbed almost exclusively on my homemade tethers. I’ve noticed that the swivel doesn’t make enough of a difference for me to miss it. Let’s face it: gear and ropes can and will get tangled in both. Ideally this doesn’t happen and takes some getting used to. On 1-3 pitch ice climbs, sport mixed climbing, and the like, I don’t usually climb with tethers at all. Most of this climbing is done where a screw can be put in at any time, I can rappel, or the terrain is rocky enough that having tools is almost superfluous. Soloing, alpine climbing, and on mulitpitch mixed route, my tools are clipped in, strength-rated, all the time. 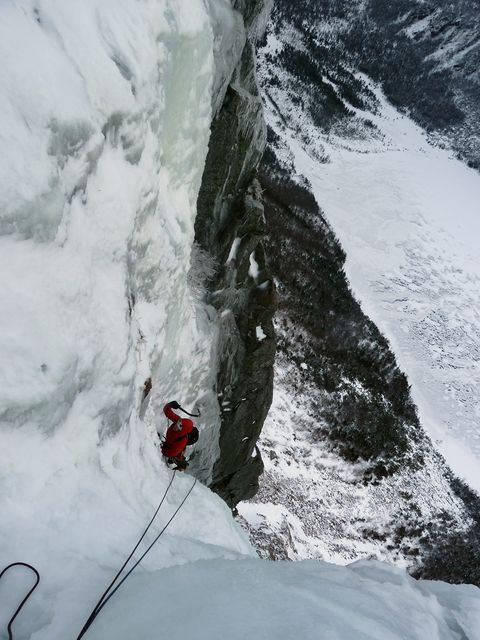 Probable 2nd or 3rd ascent of "fat of the land" in Newfoundland withtethers. Ripped off of Ryan Stefiuk's blog:)


Many friends here in New England putting up new routes always scoffed at my setup when I took them out on Cannon cliff or somewhere but I’ve noticed that more and more, tethers are being used by one time cynics on roped terrain.

The last time I used my BD tethers was on an attempt at the Girdle Traverse of Cannon Cliff. I figured the swivel might help with all the sideways climbing, but found no advantages once the rope got caught in between the swivels. That week, I sold them. Do yourselves a favor and don’t get caught up in marketing hype. Making your own pair or getting a simple, strong pair like the Blue Ice boa is the way to go. That extra margin of safety can make all the difference. Climbers should always be wary of too many moving parts anyhow."

Editor's Note:
I've written several times here about the issues with umbilicals and there use,
More here from previous content but a Google search of Cold Thistle will give you even more.. 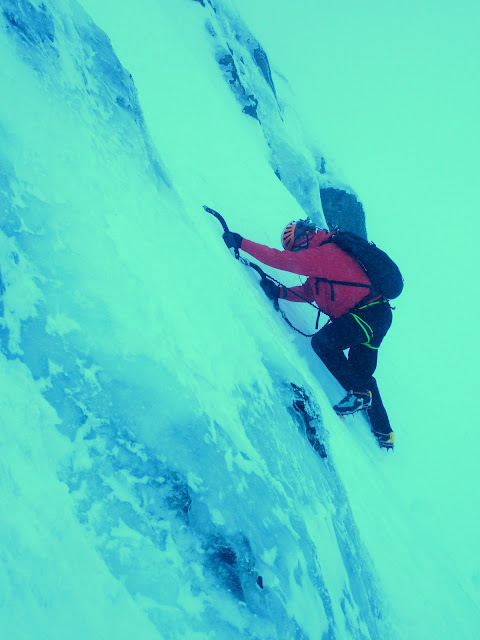 The simple umbilicals I use in the alpine

Beware here!  Any umbilical set up you make  is not going to be strong enough to take a fall on and not fail.  None of the commercial ones will take a a full weight fall and nothing you will make with climbing webbing will either.  You might get a tiny bt stronger than the commercial set ups but the margin for error here is slim to none!  DO NOT RELY ON UMBILCALS TO SAVE YOU IN A FALL.

I also had issues with the BD spinner here's what I did haven't had a problem since http://jasonbakerbouldersandice.blogspot.com/2011/03/bd-spinner-leash-wire-gate-troubles.html

The problem I see with the BD is no lip for the bail to seat. If it gets loaded siedways even just swinging it can become unclipped. I don't do the cord thing and have had no problems when ever using wire gate biners. I climb on Cobras and love my tools but BD has alot to be desired when ever I have brought this and other issues up they seem to not care. In fact the guy who I talked to about the Spinner came off as an arogant ass really. I'm really only interested in having an umbilical that if I drop my tool it will still be there!

Can you provide a description of how you made your tethers?

It is (sadly) the end of my first year on ice (60 and raining here now), and it has been a learning experience gear wise. I bought a pair of the spinners, and had them unclip on me four times this year. Of those, once was when I was pretty pumped, and the added effort of attempting to reclip while hanging on one tool really bummed me out. And, like the author I found the swivel to be pretty useless and just another part to break or freeze. By the time I realized this and tried to buy a boa, they were sold out. Looking to get a boa for next season, but I also love to make my own gear when possible, as I am pretty fussy about my stuff.

Any advice is very welcome!

May be Michael will help you out here. If not the link to Alpine Dave is good. BTW I almost always ave Boas in stock and do now as well.

I am also interested in seeing how you made your tethers. I'm just getting into ice climbing and so I am looking at all my options gear wise (and there sure is a lot!)

Love the Boa leashes, so glad I bought one from Dane the first time he brought them back from Chamonix. The fact that you can easily lark's foot them to an orange Fusion is such a great feature. At first I thought stuff like the spike on the new green Fusion would be an improvement but I find it gets in the way more than anything. A Boa leash takes care of tethering in, and if you want to walk with it just turn it upside down and use the fusion pick teeth.

I used the Boa's a few weeks ago for the first time. There's nothing really to say, they go on and stay on and you forget about them. Nice and clean.

At first I used ones I made as Grivel had the only one on the market and they were a little hard to come by. The main thing I like about the BD spinner vs homemade is webbing doesn't soak up water. I do not miss frozen tether. I agree simple is always best. The sound of the biner attached to the tool during swing doesn't seem to bother me. If I'm soloing I usually have my IPOD any way.

I have the boa & it is fantastic! I have the previous version of the Quarks with hammer & adze, so I had to attach the boa using a cord loop & the Climbing Technology Fly Weight biners.
Dane, you posted a photo of attaching the boa directly to a Quark. I believe it is the newest version from the grip coloring. Does the boa fit without tool head mods?
Also, in a pick posting you had added additional weights to the cascades. Where did you position the weights in relation to the pick?
Thanks for help, the incredible blog, & I hope all is going well healthwise,
Scott

Boa seems to fit most tools with no mods required. Not sure what you are asking on the Cascade picks? I have only used the Petzl factory bolt on pick weights..nothing more.

Here is the NA link to buy the Boas.

This may be useful to some:

I modified the grip on my nomics to route 5mm cord (mammut procord in this case) flush with the grip, by grinding through (melting acually) the rubber handle to form grooves so I could use the full strength hole in the grip. I fell off a trad mixed route whilst using grivel tethers with the original carabiners. One of my axes temporarily jammed in the crack long enough for the 5mm cord to snap, then fell out again immediately (jangling past me as I was falling).
The reason it snapped was that the hole it was tied through was not bevelled at all. This is probably worth considering for people that will use the lower hole and enlarge it etc.
The cord snapping tied onto tools is well worth considering.

Personally, on other tools, ive avoided putting any cord on the bottom of them if possible because of the extra faff (and potential of another link to fail) plus its worth considering if you do use cord on the bottom of the handle you do create the new potential for catastrophic error: if you're de-balling your crampons with the bottom of your axe and the cord hooks a crampon point whilst you're descending for example (something not that unlikely IMO, tired, late in the day, descending steep snow - the kind it will be harder to arrest on).

The sound of the carabiner in the hole annoyed me too, but i got around it by looping a layer of vinyl tape around the top of carabiner on my springer.

On a related note, if you happen to be using the grivel carabiners with some axes - reactors i know for sure - the carabiner can get hooked over your finger rest - annoying. You can fix this issue by creating a flexible band made of duct tape looped between the gate of the carabiner and the spine of the carabiner.

I will post a tethers tutorial on farnothclimbing.blogspot.com for you guys if you want. Easy and fun to do (and cheap.)

Any Idea where the top photo is from (i.e. like the exact route) bc I was unaware of any steep ice on Washington??

All but the last are East Coast ice. The top picture is on Mt Washington NH. Ask the author, Michael Wejchert for the specific route info.