Another look at Grivel and the G20

Dave did a good review of the G20 here earlier:

Dave's original crampons ended up at the factory after a more than "full use" imo and were replaced free of charge.  Although I would have assumed by the condition and the climbs they had been up that Dave had simply worn the G20s out.  In other words I was surprised they gave him a new pair to replace the is shattered pair. Nothing lasts forever at the high end of this sport.  Although Dave's G20s were certainly trying! 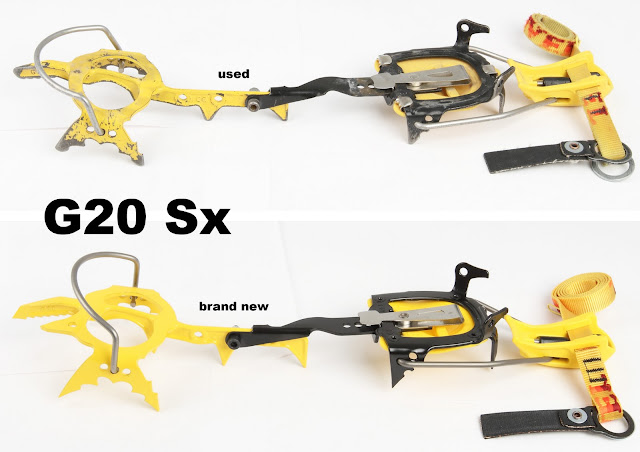 Dave's original crampon is on top here.  Grivel didn't simply dismiss the failure of  what I figured was simply a worn out crampon but spent some time, energy and money to find out why the connecting bar eventually failed and how to fix the problem so it would never happen again.  Now you get both styles of bars with your G20 or G22.

Contrast that to a year long debacle of broken crampons over at BD. Grivel not only recognised there was a problem but engineered a fix in less than 5 months.   Something to think about next time you need new gear.   I know it turns my head.   Click on both pictures to get a better idea of what went into the full story here. 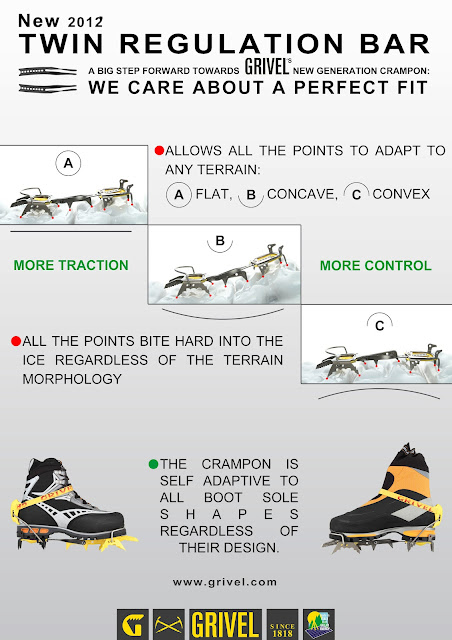 This is taking customer service to the next level. If they also made the new center bar a little longer I'd certainly look into the G series, but having US 14 makes many things more difficult.

I will never buy crampons from bd,i might buy ice axes or a tent by them but never crampons.it is nice to know that someone,grivel, cares.thanks for the informative post, dane!

Grivel are a strange company. Weird advertising (see the bizarre videos with Stevie Haston), some odd decisions (hammering down bolts on ice tools - I get why, but surely there's a better way!)... but by god they're always on the ball, aren't they?

Pushing the boundaries of design with their Monster tools, their latest competition tools and now this - a simple fix for a real problem. A company who continue to impress and deserve more attention than they get.

BD refuse to acknowledge what is obviously a real problem with their 'pons and Petzl likewise with their tools. I can't remember ever seeing a recall of a Grivel product.

I just bought a pair of BD Stingers (which are excellent... so far!) but a lot of that was down to pricing vs the G20s (bizarre in Japan). It's this kind of thing that'll make me decide where to throw my money next time...

Name another company making six top end off set handle ice tools out of a range of something like 23. If they don't have what you want they'd probably make it for you!

so what do you say - should i get G12 or Air Tech for general mountaineering and a little of mixed? Not much vertical ice here, just a couple of ~30m icicles handy. But we have more gentle (40..60 degrees) ice during spring time. The boots are almost rigid, Zamberlan Pelmo - polypro/fiberglass shank, but i want to be able to use my crampons with semi-rigid backpacking boots, too...
M.

Big fan of the G12s. I've used them on M6 and lots of steep water ice. Hard to go wrong with a G12 on any terrain.

Well grivel have some flaws they also, the G14:s front piece broke for me .

Not so funny on lead, a couple of meters above last screw

the same thing happend for a friend of my too.