If you climb eventually you drop gear.  Accept that fact and move on. 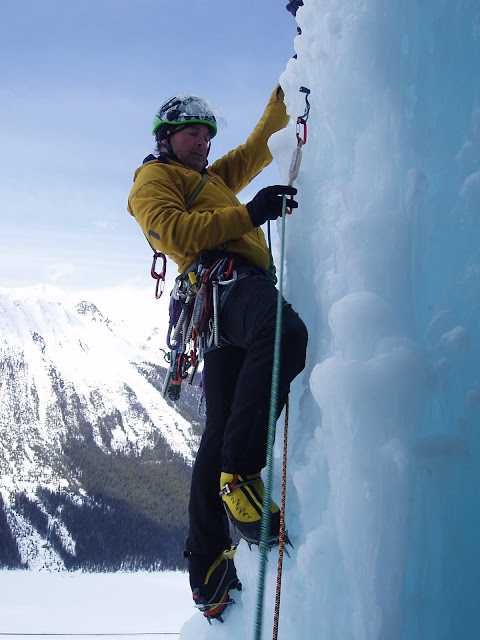 Jack with a "useful" amount of water fall gear on his harness.
Once you know you'll lose gear it is time to figure out a plan on how not to lose gear.  I think this topic is as important as any I have written about here to date.

I've never liked hauling around big racks so I tend to not take a lot of gear.  What I do take on the climb I expect to have at the end of the climb. 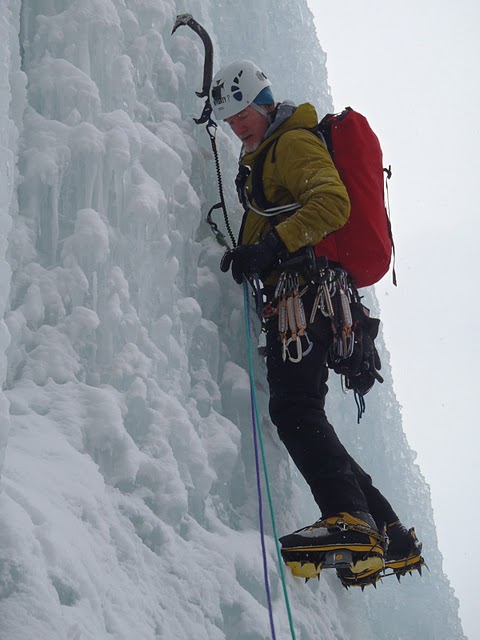 Ice climbing again and a LOT more gear on the harness.
So I have two priorities, keep what I have for gear and just as importantly be able to manage the gear change overs safely, effortless and quickly.  I want to do this on longer rock climbs as well as on alpine climbs. 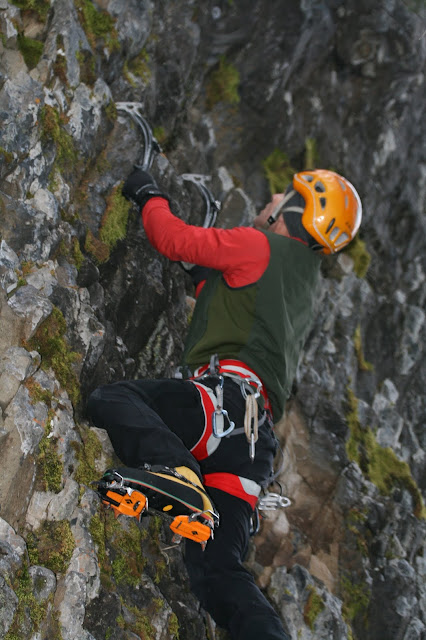 Clipping bolts on a short mixed climb...prefect use of the harness gear loops.


With the ability of most every one to climb water ice next to the road and "rock climb" right out of the parking lot...it is no wonder that the details get missed.

I've climbed with a number of guys that are new to the alpine.  The more someone has sport climbed generally means the more they will want to rack gear on their harness.   That might work...if you have tried it out previously with similar gear and in similar conditions.  But you are just as likely to find your harness spits gear off the harness loops on a regular basis when you are wallowing in steep snow. 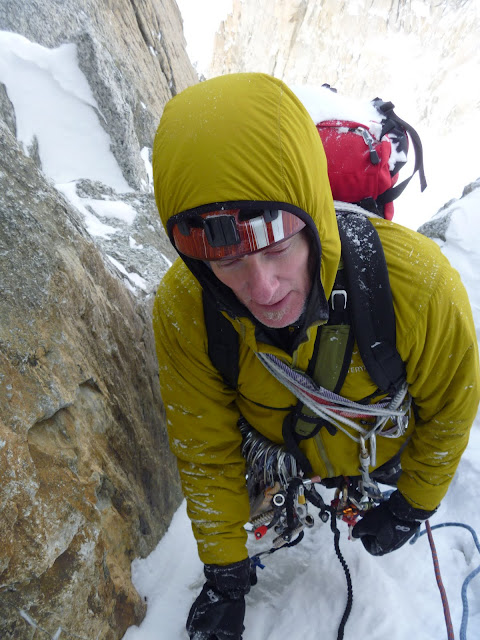 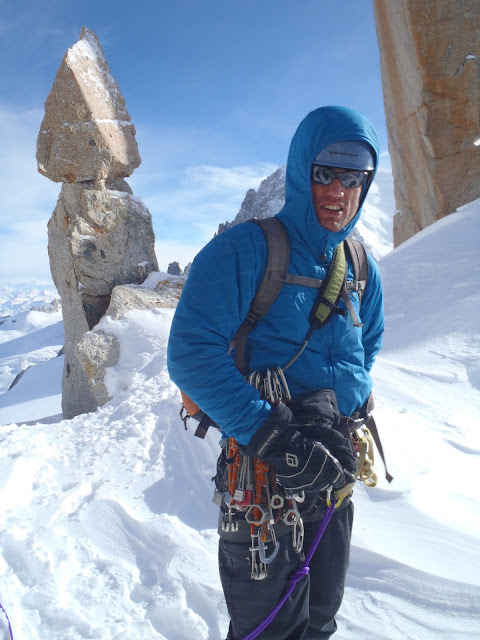 
I generally climb everything short of WI5 with 8 or less ice screws.  Twice I have ended up at a belay with 5 ice screws.  My comment to that has been..."lose another and YOU lead EVERYTHING!"  May be it is my tone.

I generally rack my ice screws on plastic racking biners in my harness for steep ice.  On alpine stuff I may use the plastic racking biners for screws but I also always use a racking sling for the quick draws and rock gear.   If I am only carrying a few short screws they may go on the sling as well.  The harness gear loops I keep for my personal gear like prusiks, a locker or two, my belay plate or even a lwt shell..  Same stuff I will not be trading back and forth with my partner.

To be efficient, safe (as in less likely to drop) and fast, a gear sling makes sense.

I typically find the guys who are most adamant about using their harness gear loops, because they hate gear slings, are the ones that "never drop" anything.  And the same ones that shed gear on route like it was free booty.

Hard free climbing at your limit might well take advantage of  your harness' gear loops.  Although it never did for me.  Not likely many will be able to take advantage of that tiny performance edge if there is one while climbing alpine routes.  I found it much better to be well organised with the right gear available, at the right time, on hard rock.   I suspect moving faster and keeping the gear you started with will make a bigger difference in the alpine.  Commercial gear slings with winter clothing are comfortable as is a full size runner that does double duty as a gear sling.

When I am handing over gear at the belay, I do it one piece at a time.  I make my partner do the same.  I don't want a fist full of wired stoppers or 3 pitons at once.  I rack most pices one to a biner, wires and pitons the rare exception. Keeping it simple and structured for myself and my partner keeps the gear at hand.  That keeps us both honest and our rack intact.  Better yet I just have my partner hand  the entire rack on the gear sling or I take what is left of his gear sling rack (and throw it over my shoulder)  sort it while on the sling and keep climbing depending on the leading plan. 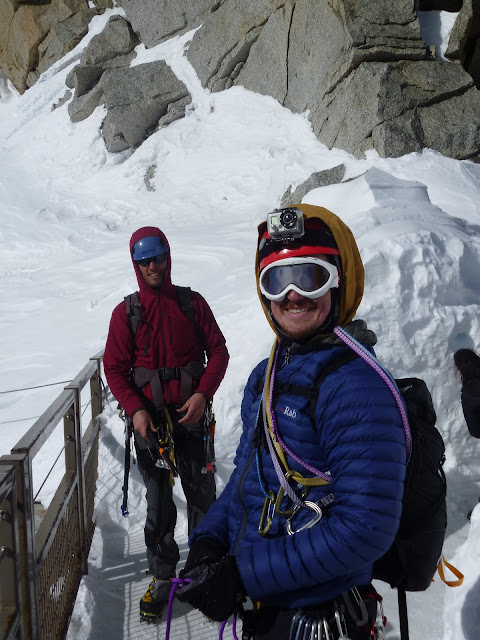 Besides the full size runners I like to use the Metolius gear sling.  I have two and will loan my partners the second when required.  It is adjustable but I don't adjust it even while using it in summer.  Set it and for get it is my theory. 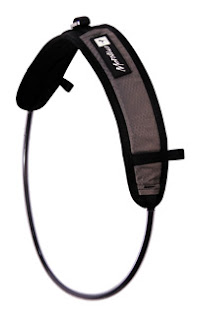 If you don't use a gear sling you should.  It is faster, more efficient and the best way to keep your rack intact on alpine climbs.  Seems to work well on trad rock too ;) 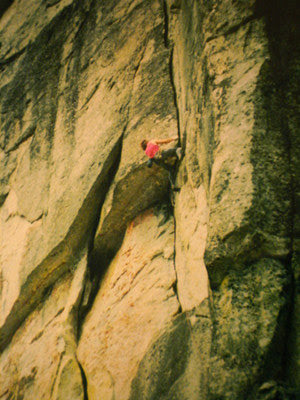 
"To climb faster and save time at belay changeovers, rack all your climbing gear on a shoulder gear sling. The second climber coming up a pitch can easily rack the gear he cleans onto the gear sling rather than clipping it onto gear loops on his harness. When he reaches the belay anchor, all he has to do is take the gear sling off and hand it to the leader. There’s no time involved, it’s just a pure and simple hand-off like the passing of a baton in a relay race.


If you don’t do this, it takes lots of extra time to unclip each piece of gear from his harness and then hand it to the leader, who in turn has to re-rack it on his harness. By having it all racked together on a gear sling, you also avoid the possibility of dropping cams, nuts, and quickdraws during the hand-off. If there’s a difference in body size between your partner and you, then it’s a good idea to use an adjustable gear sling. Just make sure it’s easy and quick to adjust and that it won’t come apart, otherwise you’re screwed."


Adjustable sling?  Better yet just make sure it fits the biggest body before you launch......adjusting a gear sling just adds another cluster to the equation.
Posted by Dane at 10:08 PM

Gearslings can still be dropped and it's one of the few ways to lose all of your gear at once.

Only time i have the entire rack on one sling unattached to a body is taking it out of the pack at the start of a climb. If you block out the climb and the 2nd ends up with the entire rack (seldom seen it happen) less the anchors I can see a problem if you aren't careful on the change over. But then I am always careful ;-)

For ice climbing, I use three BD ice clippers to hold my screws on my harness (two on the right since I seem to place a lot of screws with my right hand and one on the left). All my personal gear (e.g. belay device, locking biners, etc.) are on the back loops on the harness. I use a 6mm cord as a sling to hold all my draws and rock gear, if needed on the route. The 6 mm cord can also serve as an extra sling if needed. Works for me.

Gear Slings and Spinner Leashes don't get along so good... in my experiance anyway.

Leashes and gear slings?/ A problem?

On of the few things I haven't found a problem :) Thanks for the heads up though.

Since it has been mentioned several tiems now I looked this incident up.

Lots of ways to die climbing. A gear sling strangling you is one of the most unlikely.

In the incident mentioned "the rescue medic reported her deceased on site, and later offered the assessment that she was likely killed instantly given the nature and severity of her injuries."

So no one strangled on a gear sling.

As tragic and imo a totally freak accident. Here is the sad story behind it.

I started leading ice this season and found this post really helpful – thank you!