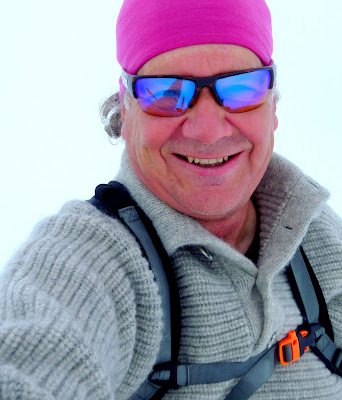 Don't hate me because I still have an original ;-)  They made two versions, a "standard" as shown and a Lwt version.  Significant price difference back in the day between the two.  I first bought the Lwt version telling myself it was "thinner" and more useful.  Both were stout versions of a "sweater".  But not moth proof which was my sweater's demise.  I now think I made a mistake on the thin version as being more useful. 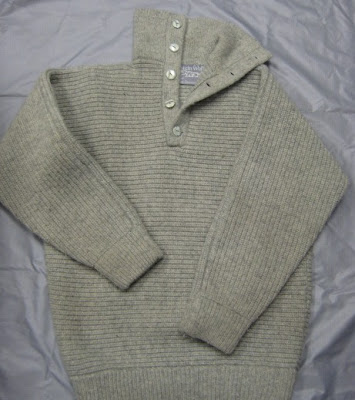 Funny thing about the Dachstein's.  I first saw the mitts in the local climbing shop and the early '70s GPIW catalog.  Likely the only way to keep your hand warm in really cold weather back then.  I went through half a dozen pairs over the years.  And I later used them in combination with other mitts (generally Helly Hanson pile lined shells) up till the early '80s. 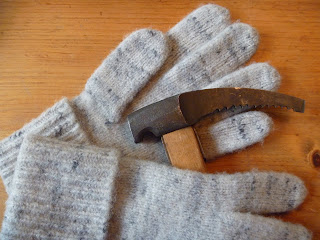 Dachstein mitts and the luxurious gloves (not the GPIW Walker wool gloves mind you) were the bomb back in the day.  Still are if you have a use for them.  Fun to see Andy Turner climb with Dave MacLeod while using Dachstein mitts and Nomics.. 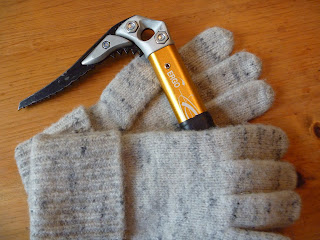 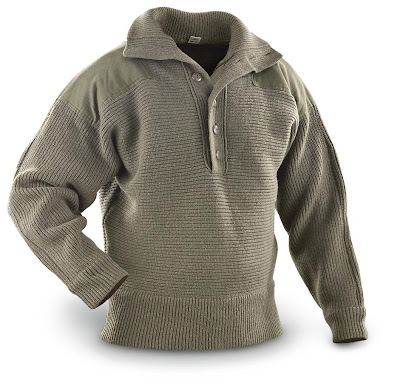 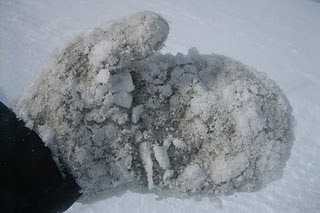 Mitts "shrink to fit with use".

My size Euro sized 52 Dachstein weighs in at 3# 4 oz.   So it is no light weight.  A jacket of comparable performance (well sort of comparable anyway)  is the Arcteryx Atom Lt @ a just over 14.4 oz.  Well less than a 1/3 in weight.

But it isn't just the numbers that tell the story here.  The Dachstein sweater can be a decent rain jacket, an amazingly good wind shell, a stretchable and extremely breathable layer all in one.  Some of the weight just gets ignored.  But no question you notice you have something on!  Stuck out side for an unplanned over night?  The Dachstein is the garment I'd choose.    May be not for all the time use but it is fun once in a while in the right conditions.  Cold, dry and windy? 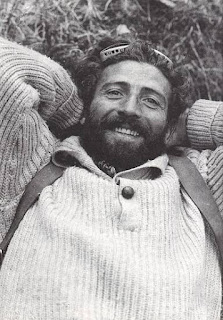 Michael Kennedy did as well.  Here after the night out, on the 1st ascent of the Ames Ice Hose. 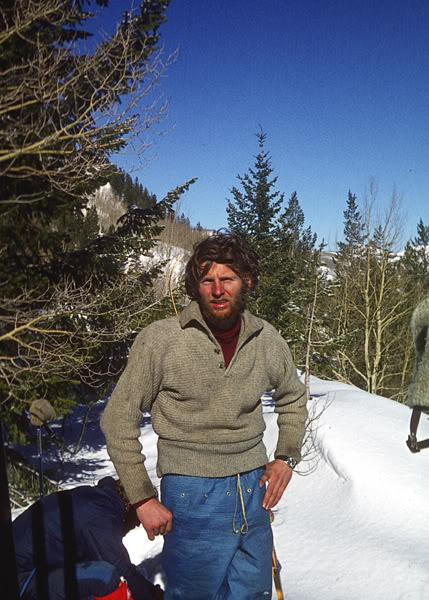 I dumped mine for the first Patagonia red pile.  Now   I have all sorts of climbing sweaters I really like.  The SherpaAGear, Mantra is one, the E. Bauer Hooded Down Pullover another along with the Arcteryx Atom Lt.  All different weights and materials but all useable.

But none of the "sweaters" named besides the Dachstein will I throw over a synthetic t shirt (don't believe anyone who tells you boiled wool doesn't itch.  It does.) and wear sidehill skiing in marginal NW spring weather as my only piece of clothing on my upper body.

And be happy doing it!

Well happy till it is totally full of water anyway ;-)  Not sure I could pack the 50# around of a totally soaked Dachstein..  Better used where it won't rain all day on you I suspect.  But this sweater is the "original soft shell".  It will still do most of what we required and do it better than even the best of the new versions of "climbing sweater".  Not everywhere mind you.  But not the worn out old war horse to be abandoned either. 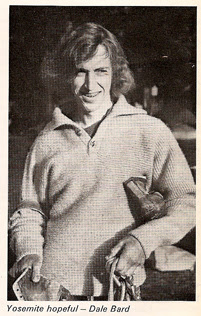 The retro kool factor can not be denied.  Like how many guys do you know that have actually even seen a Dachstein sweater let alone worn one?  EBs in Bard's "hopeful" hands BITD in case you wondered.

All is not lost.  The Austrian Army contracted to have manufactured both pull over and zip front Dachstein sweaters for years.  Also known as the "GUIDE" version.   Those can be had on the after market for reasonable prices these days.  ORTOVOX now sells the gloves and mitts of boiled wool.  And they are nice.  But they aren't of the same quality as the originals imo.  But they are close! 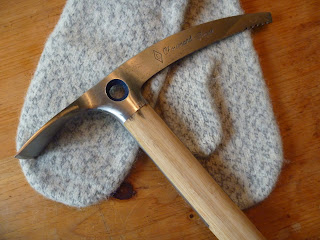 Places to find the "Dachstein" versions still available?  Often times a Google search for "Austrian Military wool sweater" will bring surplus military sweaters up as well..  These things rock as the ultimate wool sweater.  $40 plus shipping seems to be the going price as I write this on Ebay and online for the surplus version, used and new.  Last made in the early '80s I believe.  Likely the best $40 you'll ever spend for  usable but some what funky climbing clothing 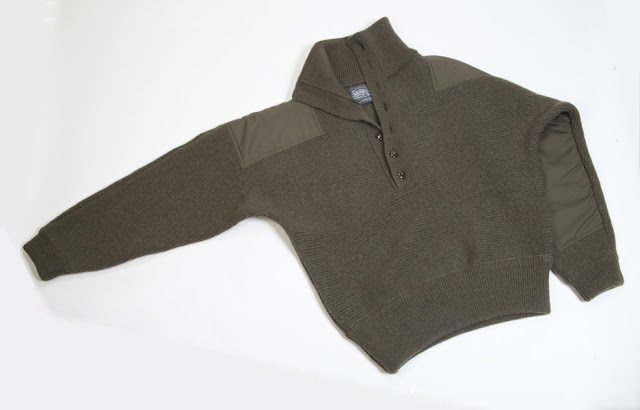 Close enough to a size 42 to work for me.

A Dachstein sweater won't replace anything I own or get very used often but they are a fun bit of quality kit that isn't easy available today.

A short history of the Dachstein area:

http://coldthistle.blogspot.com/2011/02/arcteryx-atom-lt-hoodyjust-how-good-is.html
Posted by Dane at 3:05 PM

"But this sweater is the "original soft shell". It will still do most of what we required and do it better than even the best of the new versions of "climbing sweater"."

Sorry Dane but I'm callin' BS on that. I loved my Dachstein too (until moths destroyed it) but I've had many, many pieces that were far superior in all aspects of performance: lighter, warmer, faster drying, less bulky, more wind resistant, better freedom of movement. Enjoy the retro for the sake of retro. But don't try and peddle this as something more than nostalgia.

Ha, Ha, when was the last time you used one Clyde? I skied in mine last week. Cold windy day that was spitting rain off and on. Besides the obvious 3 lbs. I had a long sleeved underarmor t-shirt on and my funky pink hat.

The rest of the crew on every gondola ride was all bundled up in Gortex head to toe. Not even a Arcteryx soft shell to be seen.

I ended up warm all day but never hot, even when hiking for a few extra turns. Didn't feel the wind coming through (to my surprise) and the sweater was almost dry from the day's effort when I pulled it off and hung it on the passenger seat for the ride home.

I'd call BS too...and nostalgia can be fun. But as a ski "sweater" the Dachstein has few disadvanteges from the Nano puff and Atom light when used in the right place.

Which is why I brought it up. Not th piece I want on a big climb but good enough for a day on the hill if you can afford to carry that extra 3#.

My first one (a lwt weight version) was also destroyed by moths. This one I store better and suspect the suplus ones are moth proofed. But i wouldn't count on it.

Peddle? For $40 why not try one again and see if it is useful. I was just thinking about using one for a long spring ski tour. For no other reason than nostalgia and of course it actually works.

Hard to bash the mitts however. They are still good to go on any winter climb imo.

"I've had many, many pieces that were far superior in all aspects of performance: lighter, warmer, faster drying, less bulky, more wind resistant, better freedom of movement."

That was certainly a mouth full...which I'll call bs on now :)

I can't actually think of once piece of gear that will do it all right now....aside from drying faster and being lighter. And I have had a lot of "climbing sweaters" over the years.

Nano and Atom Lt are in the same ball park... but neither are as warm...may be three would be ;-) But then they won't breath as well.

But I get your point, either way.

Amazing that you can still get these but check out them there prices...
http://www.bradleyalpinist.com/dachstein.html

And I do believe the Bradley Dachstein "Guide" is actually just the surplus sweaters that others are selling for $40 on Ebay.

I'm surprised that my Dachstein sweater (circa 1971) is entirely un moth eaten given it has been stored in the basement with other old wool items, many of which the moths tore into. The special means by which they prepared the wool to be so water resistant and windproof had a certain sort of 'oilyness' to it which I thought might have detered the moths from my sweater at least.
Dane it's great you fit in your sweater so well, mine's a little tight on my forty year older body.

No way I could wear my original Dan ;) Took me a while before I could wear this one and it is a 52 Euro/42 US. In retrospect I think the Lwt Dachsteins were made differently. Not as much oil and certainly not moth proof. Likely why the LWTs didn't survive over time and the heavier ones have. Packing?...deal is, in use, you never take a Dachstein off :)

That is becasue they weigh more than a modern sleeping bag and are even bigger to pack!

Hey Dane, the funny part is that Dale Bard is the North American importer for Ortovox.

Contrary to "Dane's" comment, the Uber Guide Dachstein offered by Bradley Alpinist is not a "surplus" sweater. These are new, a different cut, different fit, and are not military issue. Likely, they are a new version by the same company who made the surplus version in the 80's and 90's. Why do I know this? I personally bought the $30 surplus version, and I am the owner of Bradley Alpinist. I will say though, that the surplus version is a fine sweater, but a very tappered, tight fitting sweater...but a good value.

I have original Dachstein commercial versions and several of the surplus versions. I 'll stand by the claim they are all made in the same place. I found pattern "changes" depending on the actual sizing you have. The Surpls versions are difficult to size correctly and generally run small afer being cleaned.

They are all nice sweatrs just make sure you are getting what you paid for.

I know I am a little late to the party, but I felt it necessary to add my 2 cents. After reading this article I purchased a Dachstein wool beanie from the Bradley Alpinist link provided in the article.

I paid for the back-ordered item using PayPal 5 months ago. Since then I have tried contacting the company on 8 separate occasions, none of my emails or voicemails have been returned.

PayPal won't do anything because it is after their 45 day policy, and I paid using my debit account, so no luck there.

I know it was only ~$45, so not a huge loss, but I just wanted to give everyone a heads up to Bradley Alpinist's shady business practices.

I have just received my Dachstein pullover today from the last producer of Dachstein garments in Austria. The company is called Haratex. http://www.heratex.at

Man this thing is warm.

Heratex has a US importer: Sweaters International. I bought a wool beanie from them a few weeks ago. Great customer service!