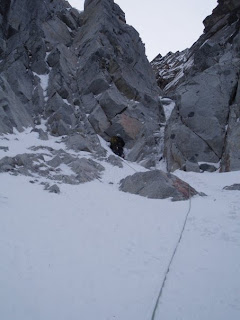 Two 2 winter's ago, I was scratching my way up a couple of pitches of moderate mixed at the end of a long walk.

I kept thinking at the time just how really hard the same two pitches would have been in my "other" gear.

The "other" gear would have been dual horizontal front points, much more supportive boots and a set of ice tools that would likely be much more appropriate for the majority of the climb. 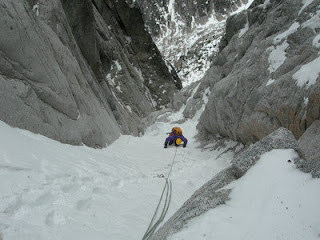 Climbing on the last two pitches wasn't very hard, but consistent, and maxed at M 4 or 5. Way more rock climbing than ice. As there just wasn't much ice to be had beyond some nice scabs plastered here and there. So the tools were hooked on rock and the mono points set in a combination of rock or ice. Vertical granite cracks and blocks were abundant so it was easy to slot the single front point. The ice placements I did get for my feet typically sheared out with only the one set of points for support and I ended up on rock anyway.

When it came to climbing the last 30m of the open book it was all rock. Even with the best gear for that particular job it was difficult enough for me. With my "other" gear it may well have been more than I bargained for. 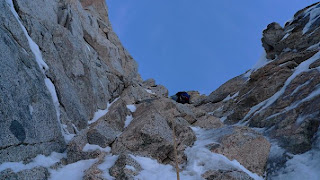 My point? In this instance a set of Nomics and Darts matched to the easy ankle flex in the older La Sportiva "Ice" made a lot of sense. No question the combo of the three made the climbing much easier. Funny how it turned out as I wasn't worried about the climbing just wanted easy boots to make the 15 mile hike in and didn't want to carry much weight. Turns out all three were a good choice on a iced up rock climb.

I used a similar thought process on another climb last winter were I took a set of Dartwins. 2000' of ice this time, most of it moderate WI4 or less. Two things I noticed besides having a lwt weight set of foot wear. ('pons and Trango Extreme Boots)

The first was the vertical front points of the Dartwins sheared through a lot on the warmer ice.

By mid day it was becoming irritating how careful I had to climb because of it. I would have much preferred a set of BD Sabertooth crampons at that point. And stripped they would have been even lighter than the Dartwins. (which come stripped) 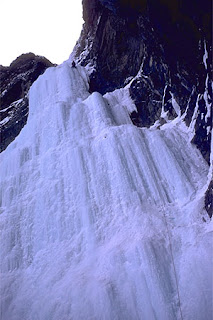 Darts alone on this particular climb, that day, would have REALLY sucked in comparison to either the Dartwin or Sabertooth. I would have been forced to do a lot of French technique on the mono point Dart that is already notorious for having loss a set of down points. More akin to roller skates at that point than a set of Sabertooths.

In the world of ever more specialised equipment it pays to really look at what you are using, when, why and where.

I saw a comment earlier today where a very good climber was forced while following to aid and French free 30 meters of difficult rock, the same 30m that the leader had freed with mono point 'pons. The reason it wasn't freed was climbing on dual front points. The dual point 'pons simply couldn't be slotted into the finger crack.

For the remaining 500m of easy alpine ice that they simu climbed above the finger crack the Darts would have been fine and no real disadvantage over the dual points.

Another point recently made to me. If you weigh 150# in full winter kit it is a lot less likely you'll be shearing vertical front points than if you weigh in at a full 200# plus kit. I'm no fly weight. Never have been and realise I putt more stress on my gear because of it so I tend to notice the small things a little sooner where others might not.

I am comfortable with both styles of 'pons in my quiver but I also look at where I want to use them and why. If I had to chose I would ditch the monos.
Posted by Poncho at 12:37 PM

Would a horizontal monopoint be the best of both or just mediocre on everything? The only horizontal mono I know of is the "mixed" front point of the DMM Terminator. I have limited experience with these (experimented on WI-3 ice, no rock). They seemed to perform OK on various ice conditions: solid, cauliflower, warm/soft and even breakable crust. However, I don't like the shape of those front points. They are rather blunt and the reverse curve/flat angle makes me THINK they are less secure. I've wondered whether a single curved point shaped like the old Chouinard rigid crampons might be the "do all" solution.

Tom,
I hade wondered the same thing myself about a single horizontal.

But I think the simple single like a Dart or all the rest (BD Cyborg and Petzl/Grivel dbl vert converts) is the best mixed, rock option. Something along the lines of the Grivel Rambo is a better alpine crampon when you want the advantage of both a mono and the support of a set of duals. Mini in this case. But they are heavy.

I've been told there are some new 'pons in the works. I might even get a chance to climb on some this winter. So it will be interesting and FUN to see what they come up with next.

Alan funny that you should ask. I heard about one of the guys at the Ice Fest last weekend doing something similar but he made a set of new Sabertooths a true mono horizontal. I like your idea better. After climbing for a solid month on horizontals on some really cold, hard, ice where my front points were literally just sitting on the ice I was ready to clip a pair of razor sharp vertical fronts on again. Along with a pair of heavy dbl boots. Light boots, horizontals and hard, cold ice sucks.

I have a blog post started all about eating my words on crampon points started but haven't had the time to finish it.

Seems less important as the weather warmed up and the ice got soft and then started failing down around us in Bozeman before we got out of there. But it was the first time this winter that my front points dissappeared into the ice with a single stroke...felt like heaven in comparison to the previous month actually.

Sorry, back on topic..when the ice is really hard a vertical front point or two is the answer. When it is soft or you know you'll have changing conditions a horizontal set is my answer.

I like quiet feet so I want the crampon to penetrate with little effort first stick or better yet just lay them on the ice and let your body weight set them for you.

The single vertical mono has such a huge advantage on mixed in my book that a horizonal mono would be at such a disadvantage in comparison it hardly seems worth the effort. That said I may chop up a pair of Saber tooth fronts and try your idea in the Alps this winter. Either way I'll report back on my results if I do that.

But I'll finish that blog on eating my words first :)

Let everyone know how the frankensteined horizontals work out if you do go through with it. My thought was mainly that it would allow you to pivot and drop-knee like with a mono, and slot in cracks a bit better. I'm gonna think a bit more before I go through with it though! Crampons aren't cheap...

Oh, and one last thought. Have you tried the Grivel G20/G22 front bails? The ones that look like the Petzl bails? If so, what's the fit like? I'm going to track down a pair I think.

Thanks for the great blog, lots of awesome information.

Hey Alan,
Only G20s I have seen are virtual clones of the Dart single monos, nothing to support them. Rambo IV on the other hand has a awesome forged mono and vertical fixed supportive side point. I like the Rambo a lot other than it is very heavy. One of my climber partners uses his Rambos on everything from alpine to sport M climbing. He climbs a good bit harder than I do...wish I could blame that on crampons ;)

I've not tried the G20 bails. But it might be worth tracking a pair of those down.

BD has a new mono point specific crampon.....likely be shown at the Jan. OR show and avaiable next fall at retail. I'll most likely wait for those rather than chop up a pair of Sabertooths. But it is tempting:)