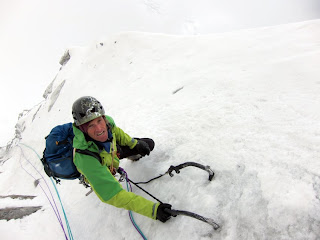 No need to panic.


The new umbilical attachment? Good move on Petzl's part but if you want it to hold more than TOOL weight on your umbilicals you need to do a small mod on the newest Nomic's pommel. There isn't enough clearance between plastic and aluminum to get even 3mm cord through which you'll need to opened up for 4mm + cord. The hole Petzl drilled in my samples are 5.9mm. But these samples had some threads showing internally which will need to be taken out if you want to use 4 or 5mm cord there. The edges of the hole are well chambered on these but I would check that as well and do it if there is a sharp edge on either side of the shaft. Easy enough to drill out and chamfer the hole. I like 5mm cord there because you always know what the knot will do and it is easy to inspect cord for wear. Again easy to modify the older Nomic and now even easy enough to modify the new Nomic as well.

New picks...DRY and ICE? Same materials, same heat treat, slightly different designs from the Astro and the Cascade. Still great picks...all still 3mm tips. Now rated as T picks instead of B picks. Little or no change in strength more likely just the label. Truly awesome picks, old or new!
Old picks fit new tools, new picks fit old tools. New picks require a spacer...which is a major PAIN to replace in the field. Buy the old Astro or Cascade if you need to carry spares and think you'll break or bend a pick or need to replace them on a climb. I like the original Cascade pick design on pure ice better FWIW. Either way buy the old picks because they are easier to replace and no spacer required if you aren't using a hammer. 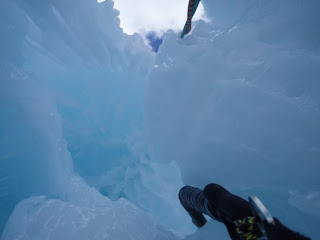 8g = 1.4 oz. Dbl click the pictures for the details where required. 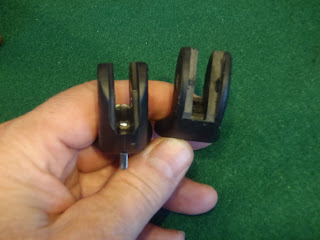 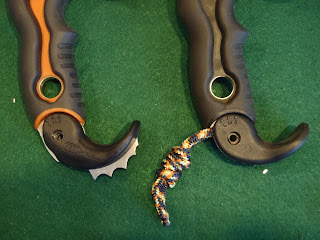 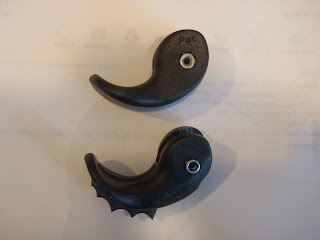 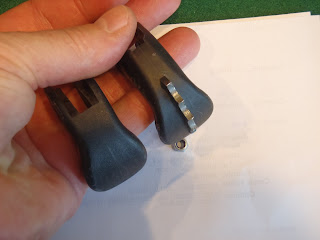 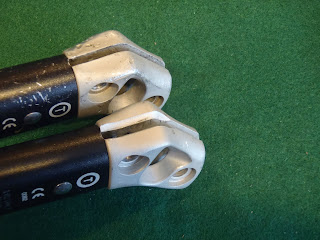 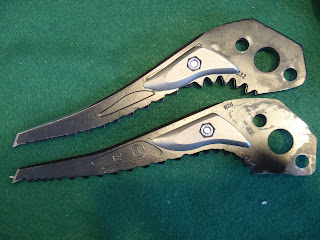 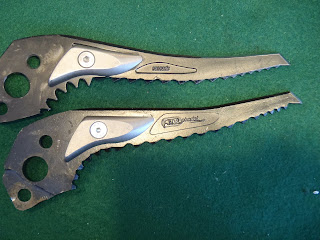 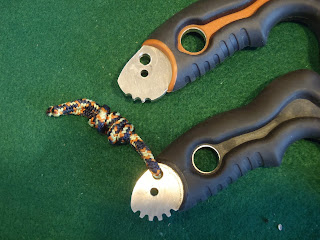 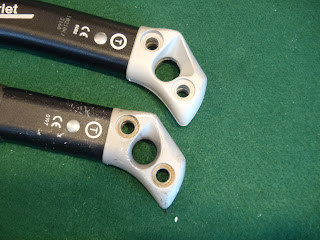 My undying, loyalty, respect and appreciation to Daniel Harro for loaning me his new Nomics for this review :) But..... you'll need to get in line for the hammers!


The link below is worth a read as well.
http://cascadeclimbers.com/forum/ubbthreads.php/topics/947206/Re_New_Nomic
Posted by Dane at 11:53 AM

Thanks for th info! I am supprized how much the tool swing changes when you add the Petzl hammer on, I can see why the light you can make the hammer and the closer the weight is to the head can really make a difference.

You are a real craftsman. The hammer fits my old Nomic perfect. I like how close it fits to the head and how light it feels.

After several years on Quarks, I have gotten a pair of old style Nomics, and recently had the chance to try them out for the first time. The ultimate proof of their design, perhaps, is that they immediately felt natural and precise. It really is such a well-balanced tool.

I know that in this blog for the most part you focus on gear, however, I wondered if I could pick your brain about two technique questions related to Nomics.

1) It's interesting to have the option of swinging the tool with one or two fingers above the upper grip rest, and the other fingers below. I thought this would be uncomfortable, but it felt fine. I did notice that after some time swinging that way, my upper fingers got tired. What's the word on the street about holding/swinging the tool like this? Good thing? Bad thing? Just another option?

2) I'm wondering about the best way to integrate the higher grip position into upward progression. I understand that using the second grip can reduce the number of swings/tool placements on a climb, but how do people apply this? For example, swing and place one tool on the lower grip, step higher, change hands to the higher grip...and then step higher again? I guess my understanding is that you try to take another set of steps up with your feet on each tool placement, walking your feet as high as possible, and using the upper grip to balance. Another option would be to not take extra steps up with your feet, and just use the upper grip to reach higher. What do folks do?

OK, that's all, and many thanks,

Hi Bruno,
I'll try to give a short answer for each question. My opinions of course and not that of the publisher :)

"I did notice that after some time swinging that way, my upper fingers got tired. What's the word on the street about holding/swinging the tool like this?"

I think the general concensus is that using a "trigger" is an easy way to seriously damage the tendons in your index and middle finger if they are fully weighted and cold. On occasion I still use that position on easier terrain at times with big gloves...but I am aware of the the dangers of doing so.

"I understand that using the second grip can reduce the number of swings/tool placements on a climb, but how do people apply this?"

Here is what I do..
With a good stick on my 1st tool I will body holster my 2nd tool (usually around my neck or on my shoulder) and match on the 1st tool. Once I get set in the upper 2nd grip on tool #1 and with my feet as high as possible I'll then plant my 2nd tool. Great way to bypass one stick and sometimes really useful. I do it more on really steep and difficult technical ice than any where else. Generally saves a bunch of strength, time and swings even if you just do it a few times per pitch.

I originally found it a little stange to fully commit to having both hands on one tool. Still not my favorite feeling but I find much of climbing is just convincing yourself everything is normal anyway :)

It works, is faster and easier..so I am an obvious fan.

Just wondering, have you tried the new Quark?

I have used the new Quark. With the issues of the new pommels being unreliable on the Ergo and Nomic..the new Quark is the only current Petzl tool I can recommend.

I noticed Ueli Steck used a new Quark and an old Nomic on an Oct 2010 ascent of the Dru Coulior.

No suprize really as the newest Quark is really only an older Nomic with a spike on the shaft.