Jeff's list of accomplishments in the alpine could easily fill several books...OK...several more books. This project, like everything from Jeff's imagination should be spectacular. 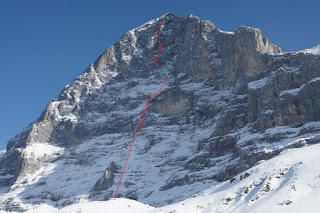 Here is a recent update from Mr. Lowe himself on the project, from Supertopo.com and reposted here with his permission.

I am very excited to see this project happening!


"Our plan from the beginning was to go over to Switzerland last winter and get helicopter footage of Ueli on the route, then come home and edit a teaser that would help us to raise more money to go back this winter to re-create some key scenes from my climb in the exact spots they occurred.

The weather was never good for Ueli to start up last winter, but we worked the Eiger and the surrounding peaks by helicopter and shot scenes with Ueli, Catherine and me that allowed us to cut a good teaser. Back home we also got key interviews with the Latok crew (thanks to Piton Ron!), and Malcolm Daly. We are currently raising money to go back late this coming winter, hopefully to capture Ueli on the second ascent, but definitely to do the re-creations from my climb. We still have a release date of autumn, 2011.

We will have a major presence at the OR show in January. The OR folks feel this film, which documents my career from the 50's to the 2000's, also reflects the evolution of the outdoor industry itself, so they are helping to sponsor it. Very soon, the website, jefflowemovie.com, will have major new features and information and will be a good place to find out what's happening with the film. I will also try to do better to keep ST informed.

Ueli actually did make a start on Metanoia in October, but loose snow over compact slabs in the First Band below the Hinterstoisser Traverse caused a big fall, so he rightly came down to wait for better conditions. Understandably, Ueli does not want us to make a big deal out of his "second ascent", until he's actually done it. Considering all the elements that have to come together for a climb of Metanoia, together with Ueli's full-packed schedule of other projects more central to his own vision, we sre ready to cut versions of the story with or without a second ascent.

Werner, it's actually a bit of a stretch to claim many people have tried to repeat Metanoia, although that is what it says on the trailer. Over the years I've been asked for info on the route by about a dozen different climbers, many of them hard-core eastern European climbers for whom the sort of "suffering" required seems to be more palatable than for more pampered types. None of them reported much progress in even finding the route through the First Band. I've made certain Ueli knows it, though, and that's been proven by the fact that he got through the key pitch which is A4 followed by unprotected free climbing to the next possible belay. This pitch is directly behind where Toni Kurtz was hanging on the rope when he died, and the five pitches through the First Band were my tribute to the spirits of the Eiger Pioneers of the 1930's.

My decision to climb without bolts is one of the things that defines the Metanoia experience. It's really analogous to trying to find a bolt-free line up El Cap somewhere in the vicinity of the Nose: it ain't easy!