Ya, that was a bad idea! 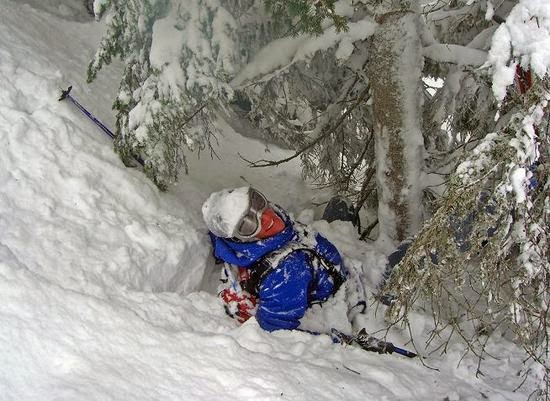 Rob Jarvis of High Mountain Guides shows an uncanny ability to find good powder in the trees.
Photo courtesy of
http://www.northernmountainsport.co.uk/index.php/eng/Photo-Galleries/Skiing/Tree-Skiing
Not always easy to keep a smile on your face skiing trees in the PNW.  Few things in the mountains during winter scare me.  Avalanches, crevasses and tree wells are THE list.

Crevasses are a fickle one.  Even the best get killed in them often enough.  It is always a gamble when you ski a glacier.  You do what you can to mitigate that danger.  And it is a long list  of what you need and what you need to know.  That and a huge dose of caution and good luck thrown in.

Avalanches?  Same deal.  Make your list, have the knowledge and stick with all the safety precautions.  You'll live longer.  Give the snow some time to settle after a storm.  Know your local snow pack.  Ski with partners fully equipped with shovel, probe, beacon and be sure they have the knowledge of how to use them are just the start.

Then there are tree wells.

I skied for years on a Intermountain snowpack and never heard of a ski well being dangerous.   We simply never got enough snow.   Helicopter skiing was a rare exception.  Even that danger was easily avoided by skiing good trees in better terrain, easier than having to bother worrying about a client dropping into a tree well. 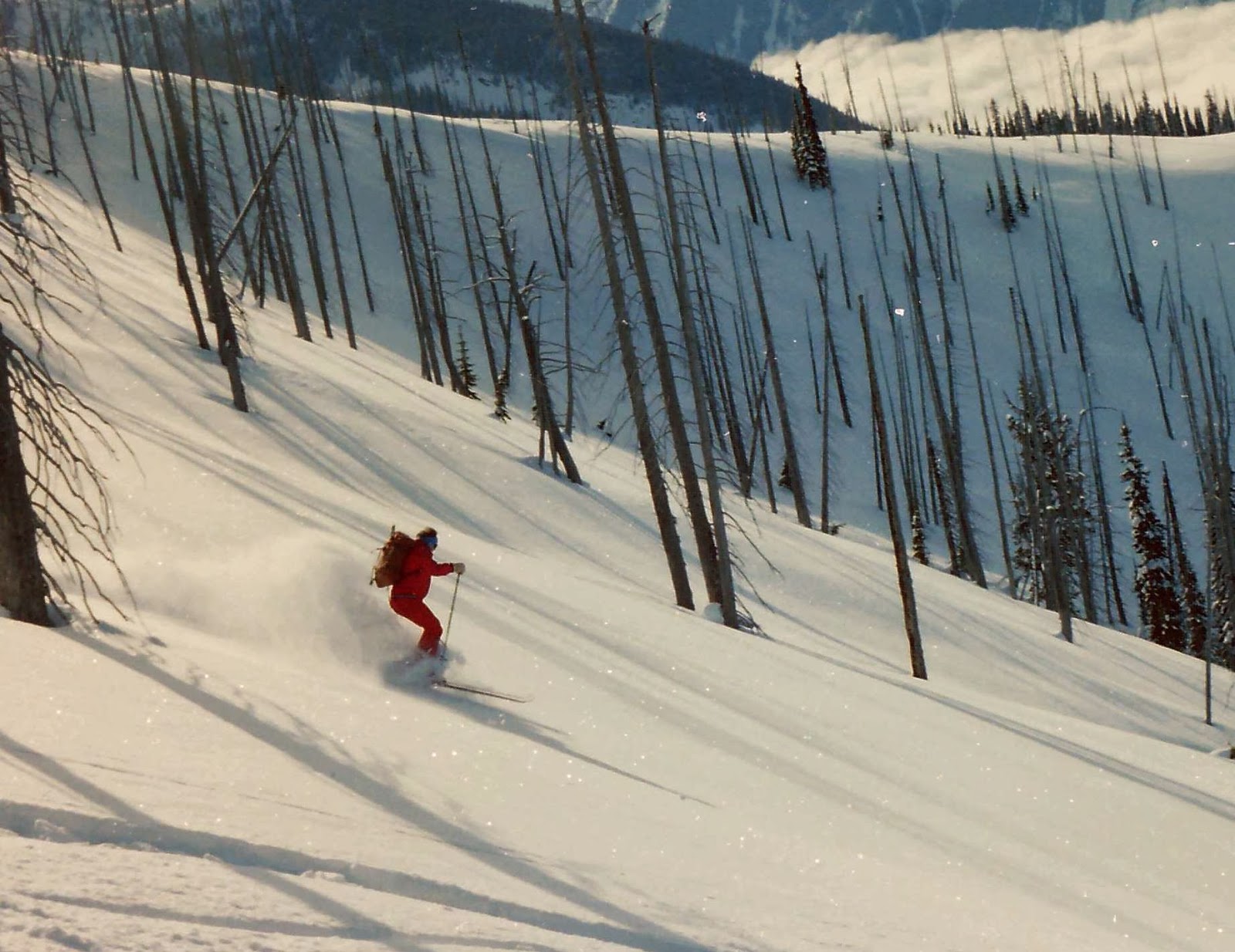 But tree wells are a very common danger here in our Maritime PNW snow pack.   In the last week we have gone from a diminished Spring snow pack of several feet to 6+ feet of snow dumped in just one 5 day storm cycle.

Here is the skinny on tree wells.  It is worth a read.

My story from today follows.  The errors are easy to list.  All of which were on my mind while I skiing.  Not like I was unaware of my own stupidity and arrogance.

Some of what I did wrong:
Skiing alone
6 feet of new snow in the last 4 days
Flat light so I was skiing trees for depth perception
late in the day and I was tired
I still have the asinine attitude "it won't happen to me"

What I did right:
skied from tree to tree on generally open terrain
skied fat skis so I had better control
skied under the lift so at least I might be spotted (dumb idea in reality)
I wear bright colored clothes, avi beacon/gear (but no partner, dumb again)


Then I hooked a ski and slowly went side ways into tree well.  Only my lack of speed going in and the ability to hang on to the low hanging branches kept me right side up and not totally upside down in the tree well. It wasn't an easy "save".   A bit more panic on my part or a bit more struggling without thought, and the results might easily have ended differently.     I could have been soooooo very fooked.   It took much of what I had physically to stay out of that tree well and head up right.   Pretty humbling scooting away from that first tree only to side into another still trying to get my skis back under me and stand up.   For a few minutes things were not pretty.  This as it continued to snow hard and no one else skiing this particular run while I was on it.  Under the gondola?  Big deal!  No one would have ever noticed I was missing...till much later in the day.  And finding me?   Even with a beacon and Recco tag likely only then when I melted out and started to stink I suspect.  It has happened before  in the same area too many times.

That was a hard earned lesson I thought I already knew.
I am a slow learner obviously.  So I wrote it down as much to remind you as to remind me.

Obviously I have not learned much...
Guilty of being stupid...I skied alone in a huge storm cycle.
I skied trees, dumb again.  And given what the fat skis allow in deep snow I do things I would never have thought of doing on lesser gear.  It was just a matter of time before I ended up in a tree well skiing that close to trees and thinking I was totally in control.  Better to be dumb and learn from the mistake than dead.

Most of us allow our egos or our friends to encourage us to do things we really shouldn't.  Hard to ignore all the great snow today.  But I could have been a lot more conservative in my choices of terrain and still have enjoyed myself while skiing alone.

I have a hard time reining myself in with good conditions.  I suspect most do.  But I no more want to die in a crevasse than I do in a tree well.

A week later what I learned from the recent deaths and my own experience.  And this is just inbounds for our local areas, off piste.
ski with partners, not just a partner
it will take more than one person to dig someone out of a big tree well
everyone comes equiped with a shovel at the very minimum
you ski tight trees 4 or 5 turns at a time and always in visual sight
skiing such short links is the price you pay to ski the tree well areas safely
I am extremely careful where I stop around trees 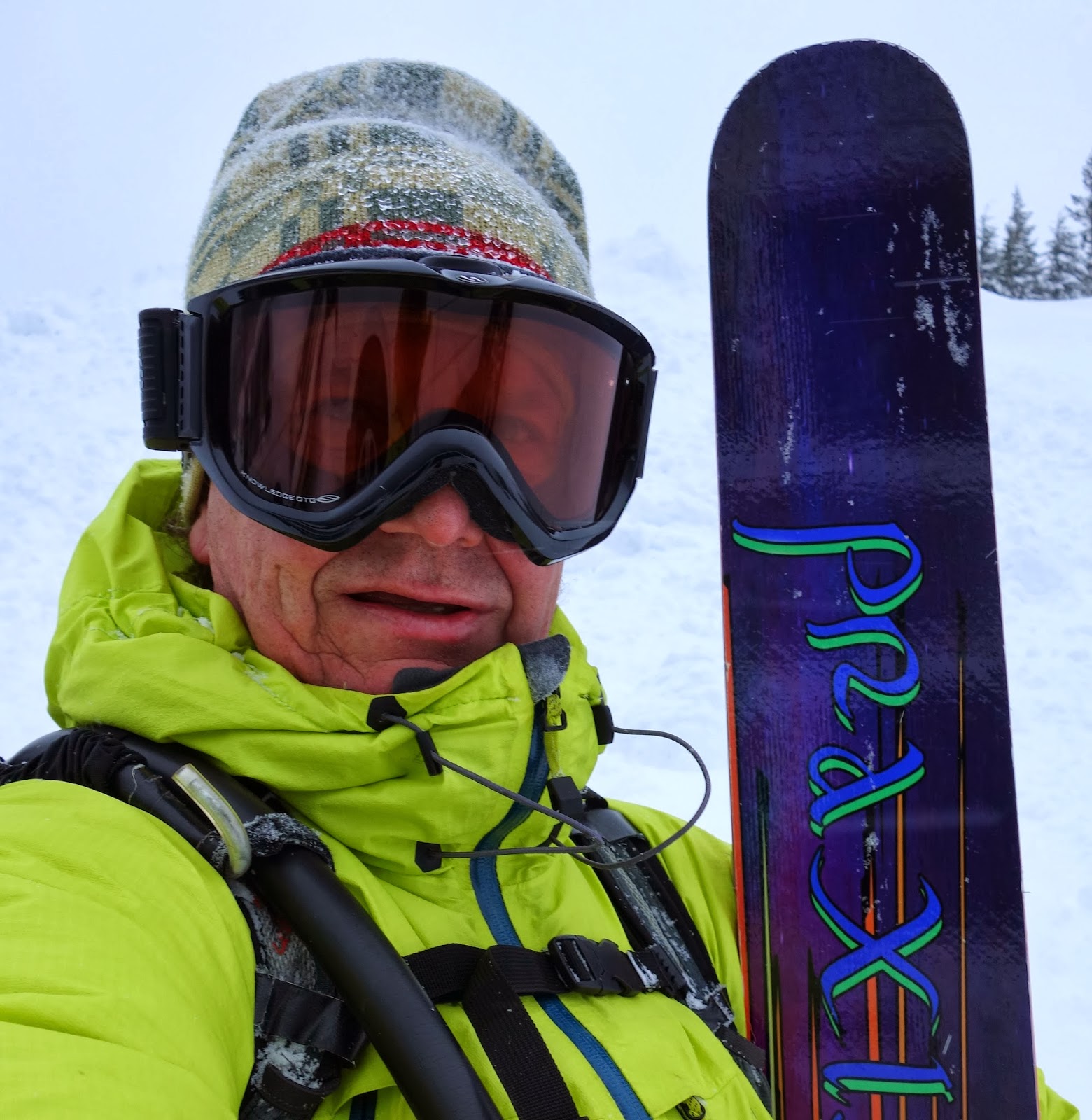 "This has been an incredible series of storms! We've received snow daily for the past 12 days with 122" (over 10 feet) of new snow! In just the past 5 days we have received an 77" of snow and it's still coming down! "

Similar stories from this week with tragic results.  Let's all be careful out there!

I was skiing with a guide inbounds in Utah in the trees with my son once...came to a terrain change and stopped... I was in front by 20 turns or so...as I stopped I hi-sided a bit at about 2 miles per hour ...slowly fell over the tops of my skis and moved my lower foot to accommodate...the tree well collapsed and as I went down I looked under my right arm to see the guide watching me go...my son with him (10 yrs old...we were not under a lift - I told myself - "all's well, he saw me" but I was totally upside down and the pine smell flipped a switch in my brain and I felt panic...guide was there in 1 minute but it was a long one and when he had finally got me out (I would never have been able to get out myself - I tried ...the wriggling around just sends you deeper) he was badly shaken - as was I...would be a bad way to go folks and if YOU ARE OVER 30 YOU ARE LIKELY NOT GETTING OUT... I had always skied with my family till lunch then headed off by myself to the trees... I don't do that anymore...have been reading this blog as anonymous for ever - as important a post as I've seen...

Dane, the positive you can take from this day is that a close call teaches you to be more conservative. Unfortunately most, if not all of us need a close call to make us starting paying more attention to the facts. and that's not only skiing... it's on a home project when you screw up something, it's driving your car to the grocery store, it's that old story about higher the risk bigger the reward until you realize it's better to compromise the reward in order to be safer out there and alive to come back another day!

Glad it was only a close call!

Never dealt with a tree well before, but I've been taken out and buried by my own slough while skiing alone at a resort. Half my body including my head were buried. One arm and leg were out and I was able to dig myself out. Shook me up a bit and reminded me that in-bounds doesn't mean not dangerous. I ski much more conservatively now when I'm alone. Thanks for the info and reminder, Dane. Glad you are safe and are able to tell your tale.

Glad everything turned out alright in the end and it was just a good reminder rather than a bad situation. One of the guys I was skiing with at Yodelin on Saturday found one too on our first lap up. Luckily he was able to stop himself as well and was able to push out as it was a smaller hole. Was a good reminder at the start of the day for us to be extra diligent when skiing pitches with treewell potential, especially with all the new snow.

Too many people have been dying here in the PNW outdoor community lately. Stay safe out there!

Dane, I suffered a pretty severe bike crash under the same pretenses. I am a decent mountain biker, and I was on terrain that was easy and I had done before. Made a stupid mistake and was laid up for several months with a fairly severe head injury. That's how I lost my sense of immortality. Definitely makes me think twice while out ice climbing or the like. I used to tell myself to not worry about the danger because "I won't fall." Seems like a pretty stupid argument now.