More on the Spantik by Jesse Huey and Mark Westman... 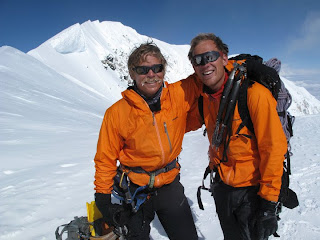 Mark and Jesse on Denali's summit ridge after their quick ascent of the Slovak route, June 2010.

MOST everyone recognises the La Sportiva Spantik as the current "gold standard" in technical dbl boots.

If you don't recognise their names take a look at that video of the Slovak route on Denali again. Both these guys have been ripping it up in the alpine for some time. I write, sitting on my ass......these two guys actually climb.... a lot!

Many thanks for allowing me to post your comments here guys! Hopefully it will help someone else down the road. And FWIW...just my opinion after a short review but I'd bet the Spantik makes a way better ski boot than the 6000.


Here is the straight story from two guys in the thick of it. 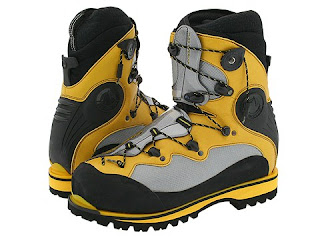 "So my opinion on the Spantiks... well for one until the new Scarpa boots came out, I was under the impression that they were the best double boot out there balancing warmth, weight, and ability to climb technical terrain. That said, and not to say that any specialized alpine boot out there, was designed for skiing, these boots wrecked havoc on my feet skiing to and from our climbs... It was certainly an oversight to not properly put blister pads BEFORE the ski in where I thought I would get them. All that aside though, they climb anything you will find in the mountains incredibly well. I think it would be challenging to climb anything in the M8 category with them because of the weight and volume. The new Scarpa 6000 boots made me think about ditching the Spantiks... People capable of climbing M10 could absolutely do it in these boots (I normally use the silver sportiva trango's - fruit boots are the lamest thing I have ever seen). The low volume/light weight really surprised me. I am under the impression that the Spantiks are (probably) a hair warmer, which is certainly a concern for climbing in cold climates, where in Alaska this year on the SAR team, we saw no less than 50 people come through our med tent with frostbite. So all that said, I like my Spantiks, blisters and all, and will be taking them to China as my climbing boot. If I were to start all over though and had to buy a new pair, I may be leaning toward the Scarpa's but still haven't had a chance to try them out so cant say if they have a good fit or not.

A few things about the spantiks you could note: they are 700$ and have parts that cost 0.25$ that when they fail, your boots are hooped... I have seen this at least 3 times on out of the box spantiks.

The boot takes wear pretty quickly. The shells are durable enough, but I recommend seam gripping literally everything on them to preserve their life and making sure to change your laces often enough so that they don't break on a climb, which I have found out the hard way...."

"Spantik...I guess I don't nitpick gear too much, for me usually it either works or it doesn't. Having said that...

The downside: Jesse and I both got HUGE blisters from skiing uphill in these boots. First it happened on the patrol. These eventually healed but then we just got a fresh new set while approaching the Slovak on skis. While just climbing, I don't think we would have gotten them- as you know, skiing uphill especially with a sled as we has en route to 14 on our patrol often results in blisters. At least for me it does, my feet have always been susceptible.

Anyway that's about the only performance criticism I can muster and it might have happened with lots of other boots for all I know. I have fat feet and fallen arches and these were otherwise very comfortable. I summitted on the buttress and the Slovak without any sort of gaiters or overboots and my feet were warm (June 2nd in cold temps and wind, and June 23rd in warm windless weather). My feet did get extremely cold in our mid route 31 hour push but we were dehydrated and very tired so we didn't have much reserve to fight anything at that point.

The boots climbed steep ice and mixed really well and felt less "clunky" than the Nupste's, which I used for the previous five years.

I do have one substantial gripe about the design details: the plastic hooks on the speed lacing system of the inner boot are really chintzy, and I busted one off the very first time I put them on and had to send them back for warranty replacement. But sure it'll happen again. Also, the Velcro closure at the upper end will wear out in another season or so. Pretty cheap bullshit materials for a $700 boot. In addition, the little round grommet that you secure the outer laces around on my boots is already coming loose after 2 months of use, it still works for now but I'm
sketched enough that it might fail (leaving me no great options for securing the laces) that I probably will be sending these back again for warranty. So I do think these 50 cent parts being used for the execution of crucial functions of the boot is not a great feature."

I love Jesse's comment about fruit boots, I remember the look he gave me when I pulled them out last time we were at Vail. Not all of us are superheroes buddy.

I'm super curious how the new Phantom 6000 climbs compared to the old version. I love my old Phantom 6000s, because they just fit my feet so freaking well. I can ski in them and have climbed fairly hard mixed (for me at least, M6/7) in them. That said, they are heavier and I don't like the lacing system (thin laces with the same lace lock combined with a thin velcro strap on the liner).

Hopefully I'll be able to get a pair of the new Phantom 6000s here soon to try out and see how they compare. The weight difference and change in lacing system is enough to make me curious, I just hope the fit is the same.

Thanks for pulling the comments from those guys together Dane, interesting stuff. The snow will be falling soon in the Rockies!

Thanks for all the information Dane! Keep 'em coming.