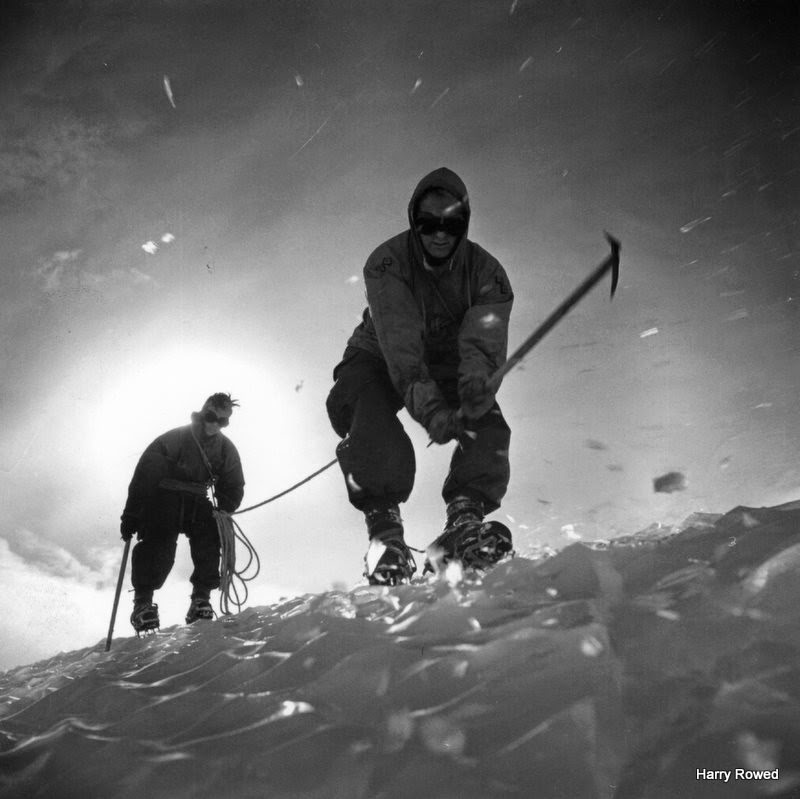 My first lasting impression of "ice climbing" was a quote.  Don't remember where it came from now but most likely a European from the '30s who had spent some serious time on steep North Faces in the Alps.

I took that to heart early on and truly believed it.

That mind set took me on some grand adventures.  Two of which were early ascents of the ice routes on the North side of  Deltaform, in the Canadian Rockies. 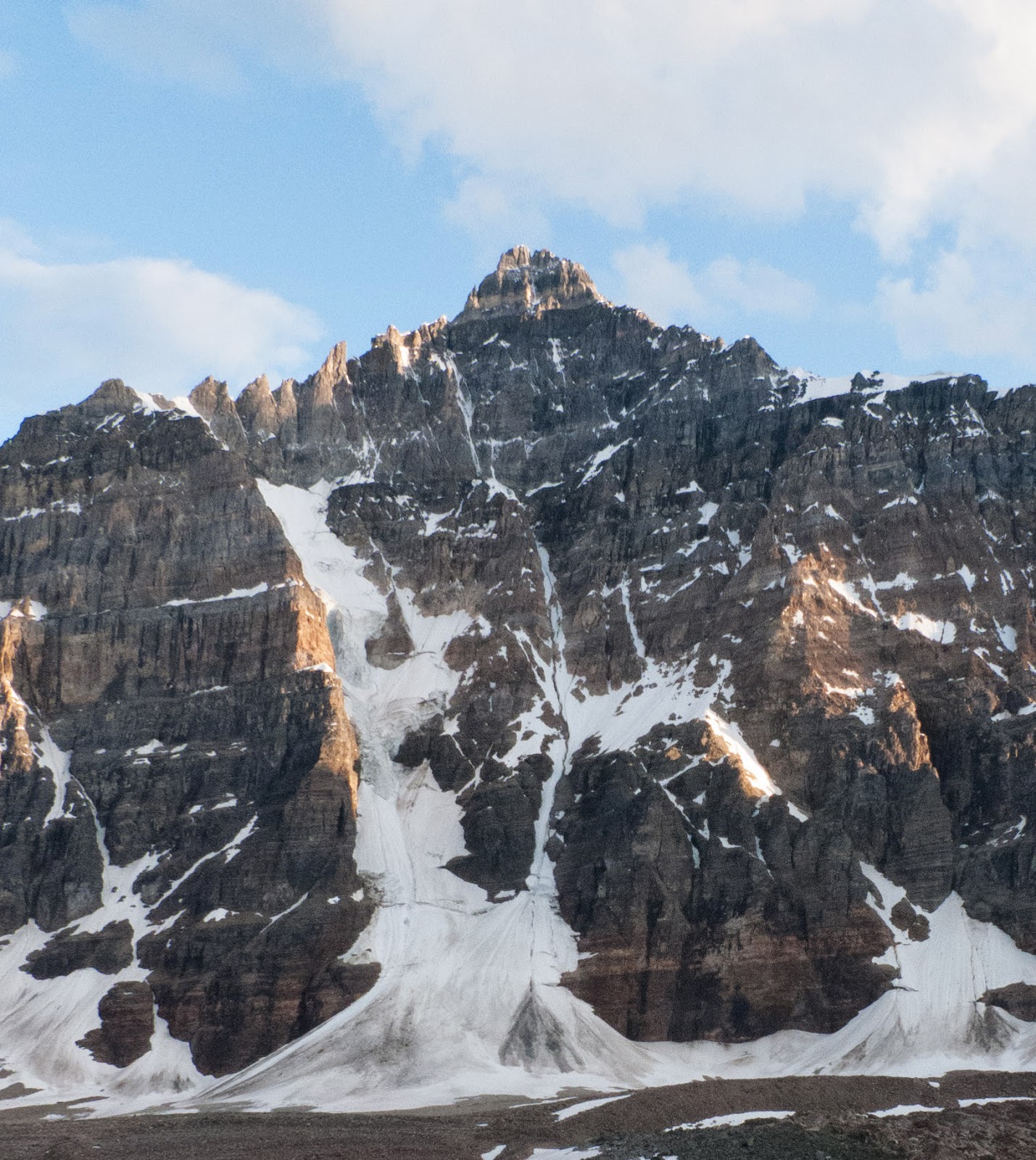 And as a friend reminded me recently while discussing new axe designs..."You have a lot of time with axe in hand to have formed an opinion" :)   May be not the most well informed opinion, but I do have an opinion!

A long time buddy of mine then reminded me for  the need of a "real axe" more recently.  Which took me back for a trip down memory lane and another look at modern axes.

My friend Steve wrote, "I remember when you came back (to the mtn school)  in the early 90s and showed how to cut steps and ascend vertical, consolidated snow with naught but a regular mountaineering ice axe, topping out through the overhanging cornice on the steep, NE side..."

Much as I love my Nomics, they aint for shit as a "real axe".

And most of the time a real mountain axe will get you up over and off difficult alpine terrain if you only know how to use it.

Bruno and I have both waxed on here with painful detail about "classic" axes.

Not to bust on Bruno here because I really like his additions to Cold Thistle.  But it isn't a cultural thing.  It is either a real ice axe or it aint.

Can you climb the routes on Deltaform with it?  Or Ptarmigan or Liberty Ridge on Rainier in Oct?  If you can't, it aint.

How do I know this you ask?

I'll eventually get to all that.  But first let me share another story.  I get asked all the time, "what axe should I buy."   Nomic, Fusion, Quark or Cobra generally andd or subtract your own favorites to the list?

Fook me running!  Most people want to run out to the first piece of water ice they see and top rope it to death.  It aint climbing.  Not that I haven't top roped a lot of steep ice, I have.  Enjoyed it as well.  But it aint climbing mountains.  It aint even practicing to climb mountains truth be told.

I don't want any of those technical tools for a climb of Rainier, Mt Blanc,  most routes on Denali or for the majority of things I need a simple mtn axe for.  Technical tools can be and generally are a PIA when it aint all that technical.   The same place a little old school skill and a old school tool is needed.

How do I know that?  Because I have climbed everything mentioned so far, including a good bit of  vertical water ice (not always on a top rope btw) with a classical mountaineering axe.  And most generally one that was wood, straight shafted @ +/- 60cm. 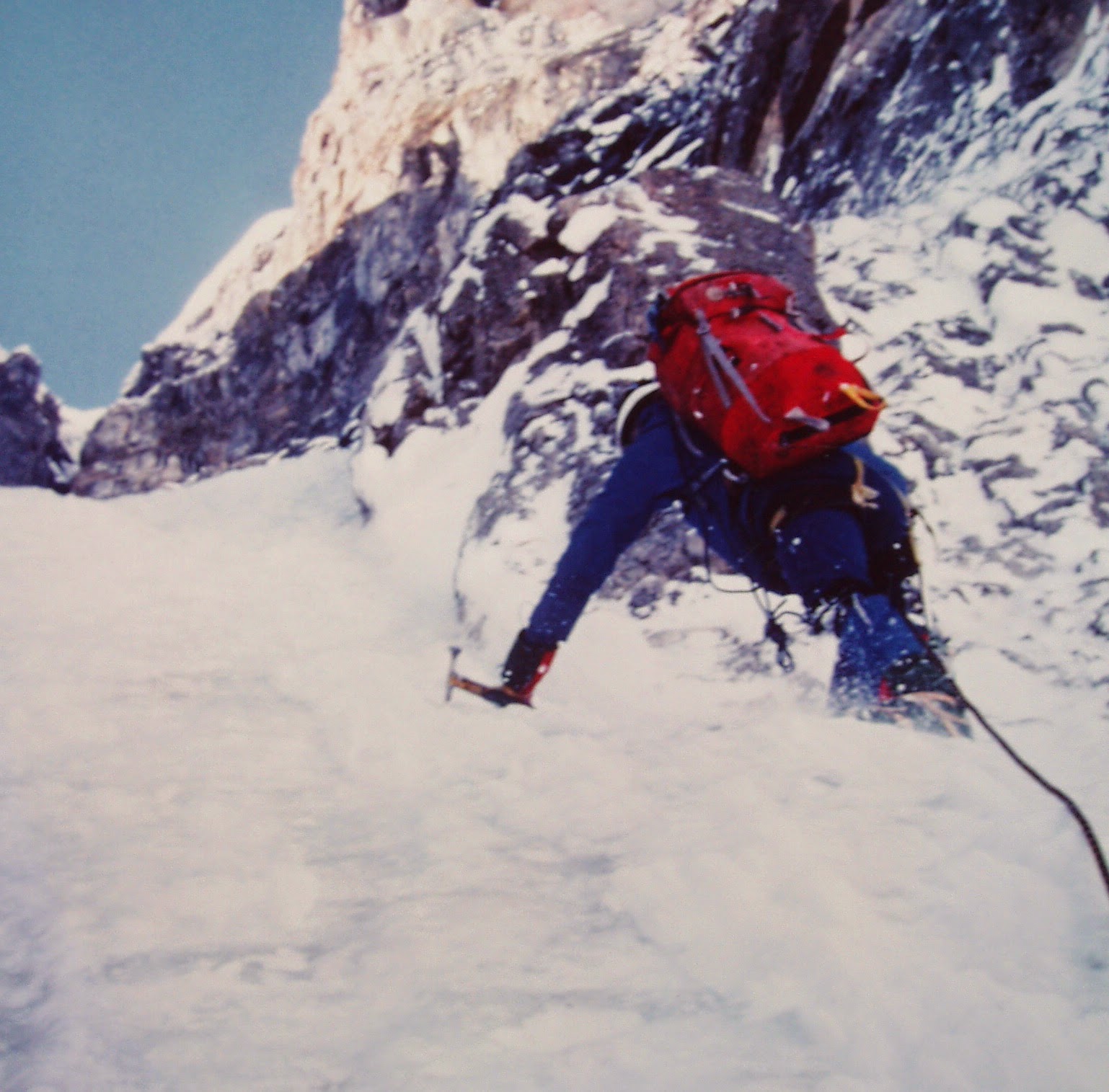 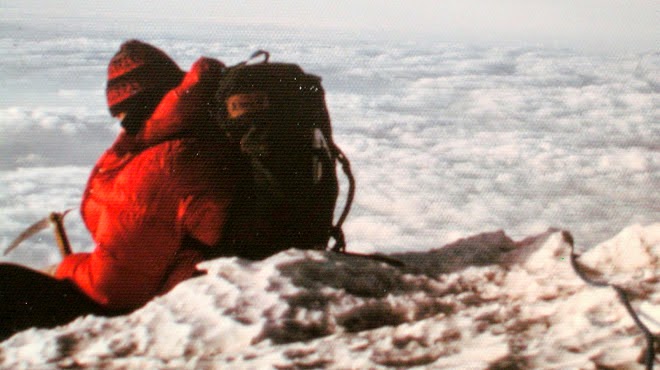 So imagine how "lucky" I felt to have a few meters of wind blown, blue glacial ice in our way on the Serpentine passage of the Haute Route armed with an all aluminum ice axe.  I can climb damn near anything white with a proper steel axe and crampons.  And safely climb almost nothing that is hard while shod in aluminum crampons and swinging a aluminum axe. 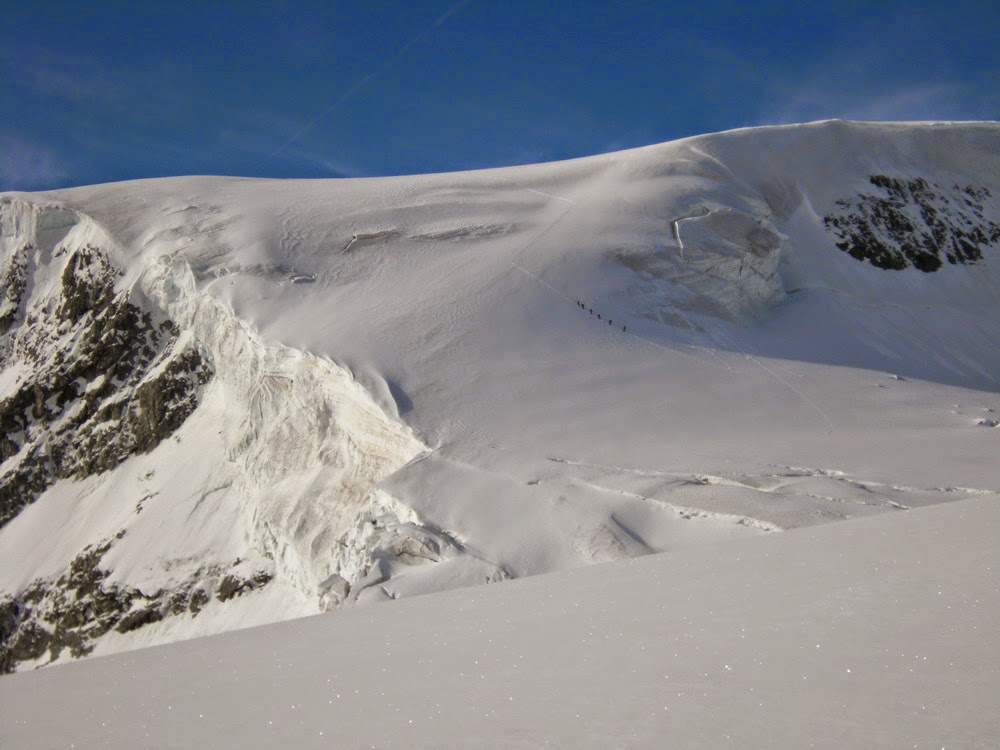 Beautiful  setting but no place for lwt gear or beginners with little or no skill when it is in difficult and hard conditions.

The Serpentine was easily avoided.  And we still found some spectacular skiing up to and off Pigne d'Arolla.    Still the Serpentine wasn't the only time I had wished for a proper mountaineering axe this Spring. 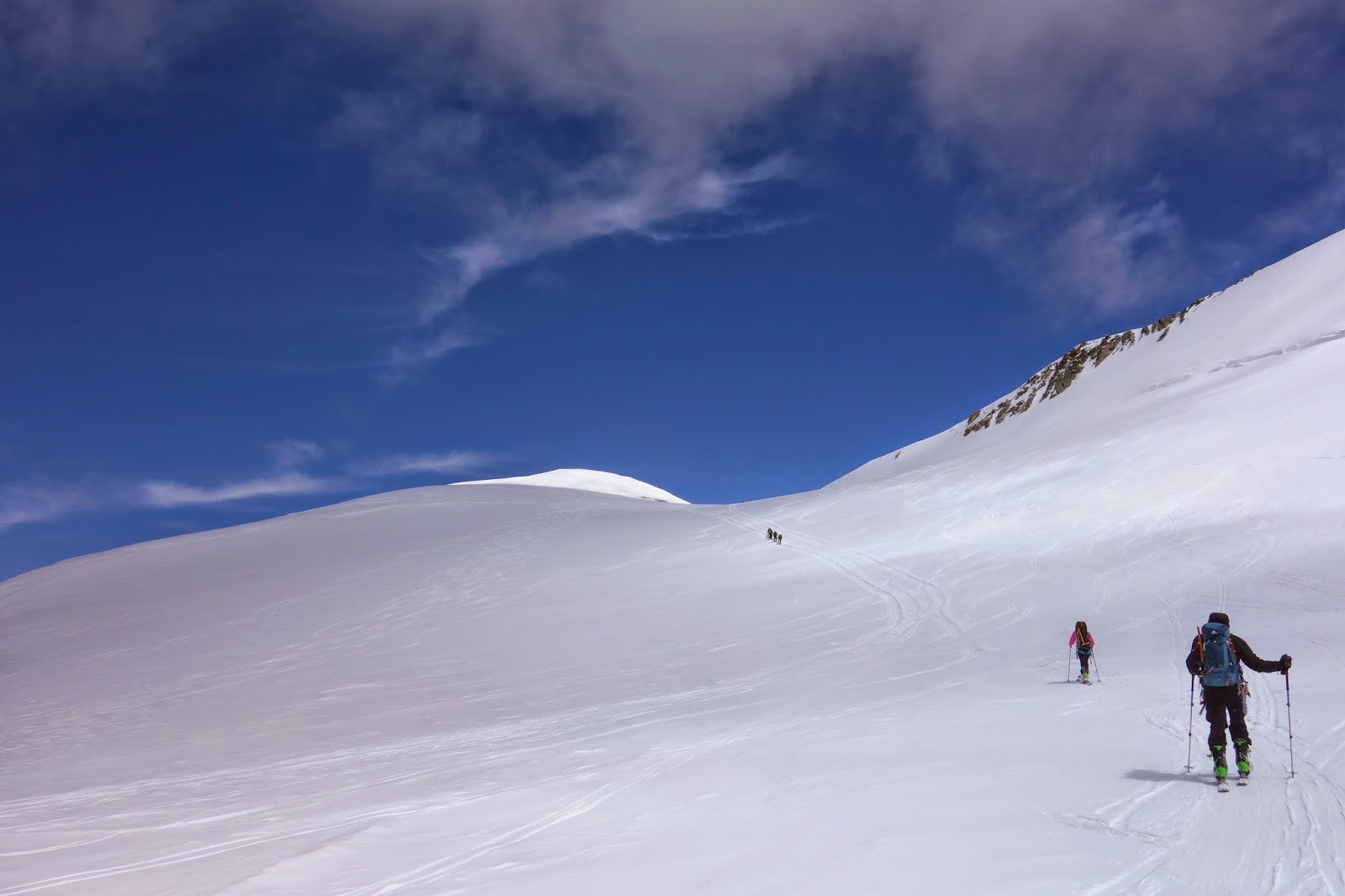 The most easily remembered need for an a real axe I had just ran out of snow I wanted to ski.  A patch of blue ice kept me from the next bit of snow and a terrible bit of awkwardness separated us all from finishing.    Three dubious screw placements and way too much anxiety and a runner or two over some flakes eventually solved the problem.  Skis and boards off and then on again.  A real need for crampons or at least a hard soled snow board boot and better yet a ledge on that hard glacial ice to manage it all.  With a true piolet and a few seconds work the ledge would have been easy.  With a aluminum rando race axe?   Almost impossible.

So much for race gear ;-)   Love that it fits in my pack and is generally useful, when I really could just as well do with out.  Sometimes doing with out the proper tool sucks, sometimes it is simply just a little too dangerous IMO.

I was wanting one of my old Chouinard Piolets both days.   Easy to save the world, if not just yourself in the alpine with a proper axe in hand and some little skill.

Top axes on my hit parade are mostly collector's items now.  Chouinard Piolets with various wood handle and head configurations.  A almost priceless Bhend.  But The SMC Himilayan still gets a nod and easy enough to find.

Of the modern axe designs I like and own the  Petzl Summit,  a couple of Grivel's seemingly endless line of Airtech axes and the lonely Blue Ice piolet.   The Blue Ice tool I like a lot btw.  Kinda a smaller version of the original piolet/axes I grew up with.  And every bit as versatile in the mountains.  Straight shaft, big head, decent length, slightly curved pick, works every time on hard ice.

For particularly nasty things where I really want my Nomics but am too lazy to carry them,  the 43cm Petzl Sum'Tec hammer is a big favorite.  And in a pair they are good enough to take on any ice anywhere.  I used less on Slpistream.   Just not too adroit at chopping a decent step.  At that point other things matter more.

A word on axe length?

I hate long axes.  But then long axes  (under 70cm) and longer than 55cm are much easier to chop a step with for general mountaineering.  A 43cm shaft won't get much done in soft snow.  50s are generally too short.   A 60cm or better yet a 70cm axe will get the job done.  I tend to choose what tool by what pack I will be using and if I am willing to carry the axe on the outside of the pack or want it inside or dangling off my harness.

Not the best suggestion I know but it is how I often get things done.  A decent sized axe (55cm+) is easy enough to carry between pack and back for quick access and storage.

A 43cm tech tool dangling off a harness is not a bad idea although it seems a lot like "running with scissors" if you are on skis.   Mom or your local "mtn expurt" might not agree.  Probably would want you to have better rope management skills as well and a long aluminum walking stick to sort out your day. 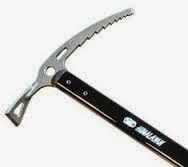 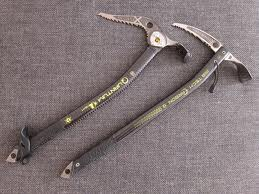 and more from Grivel!  above and below 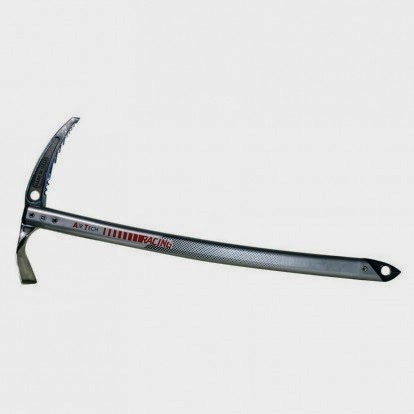 there are no decent lack of choices

and finally just to add to the confusion  a 43 cm Sum'tec hammer. 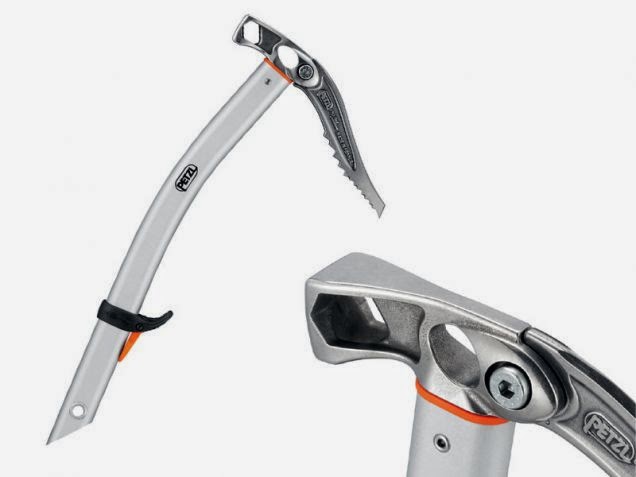 What no adze?  You chop with the pick if the tool is capable.  If you don't, try the clue bus.

Any of these axes will do the job if you can.   Climbing on Nomics is cool.  But only if you understand there is more to the whole wide world of alpinism than a very specialized tool and limited technique.

And the axe I used in mtn school,  on Deltaform and most every where as a youngster?  It was the middle one.  Still own it a little worse for wear and several welded tips later. 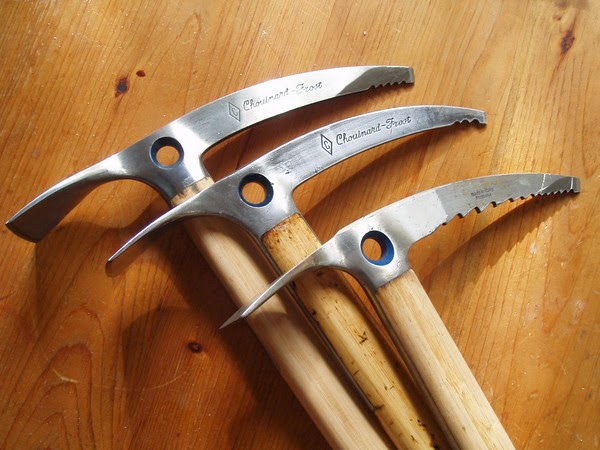 And now my constant companion that is not so good on ice?  But it fits in my pack and weights almost nothing :-)  Not getting rid of it either.  A good craftsman knows the limit of his tools and his skills. 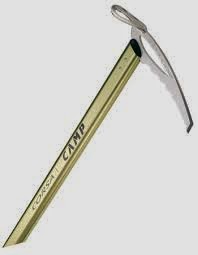 HI Dane--As somebody who has written on this site about classic ice axes, I feel obliged to make a confession: I have never chopped a step in my life :) I have chopped plenty of ice and snow ledges for a tent, but no steps. Maybe this is something like piton craft...a practice slowly disappearing among today's climbers. In any case, I appreciate the article--and I will keep using my classic ice axe!!!

Thanks Bruno. The most vivid and precious days I have spent in the mountians have been with just an axe and the sac on my back. No 'pons. An good axe and a decent set of boots will take you a long ways.

I certainly don’t have the ice climbing or mountaineering experience that you do, so take my comment for what it’s worth.

Friends of mine who are extremely weight conscious, always use steel crampons and ice axes when skiing in glaciated terrain. All it took was trying to make it over a short section of exposed ice aluminum crampons or bending a crampon to systematically take steel gear.


I borrowed a Camp Corsa Nanotech once from a friend, and thought that it worked really well for a short section of mixed / ice, might be a good compromise.

don't worry i am very new to mountaineering but i have chopped a lot of steps. the art isn't disappearing anytime soon. IT IS TO USEFUL