Summer OR? And some winter stoke! 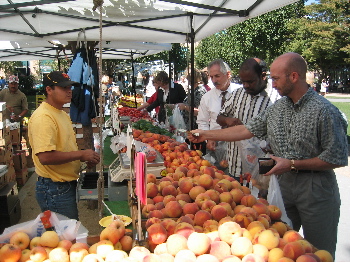 Vendors for out door gear from all over the world display their newest products and write orders for the Spring 2014 delivery of goods at Summer OR in SLC.

The Trade shows are not open to the public but only vendors "wholesalers",  the retail store owners there to buy for the next season, working press.  And every person in the free world looking for sponsorship, a freebie or some other way to sell themselves.

Me?  I go to look at the newest toys.  Simple as that.   Some of them I'll eventually write about here.

Attending the shows twice a year is one way I stay up on the newest gear  being released and keep track of the newest technology that I have an interest in.   Not uncommon for me to find "new" things that I find interesting as well.

For the retailers it is a stressful and super busy week.  Generally all work, no play and spending a LOT of money based on their sales projections  for the following season...6 months down the road.

For the wholesalers they are writing a full 6 months of production of their products.  Made in France, China or the USA doesn't matter.  They are selling gear that has yet to be made.  Sales generally based on one off prototypes.  Talk about stressful!

Add to the economics a trade show (small by comparison to the Euro shows btw) convention that big enough it is almost impossible to see every vendor on the floor and every new piece of gear that is displayed.  And you have some idea of what an OR show become for those working them.

Summer OR is usually slim pickings for alpine and winter climbing.  But hopefully I'll have a few new and interesting bits of gear to report on shortly.

Till then, how about some winter stoke?

Praxis is unique in that they only sell via the Internet.  Pricing is better because of that and but it isn't the only difference from other ski companies.  Quality of production is amazing.  "From your mind and their hands comes a custom pair of skis made specifically for you".  If you want to take the time.

What is shown above on the left is a standard pair of GPOs in a 182cm,  medium /stiff flex.  The yellow ski is a custom Medium+ flex and "Sun" top skin, 192cm GPO and the far right ski is a Pompeii top skin, medium flex, 187cm Protest.   All of them will be getting Dynafit bindings.  Hopefully I'll be skiing the short GPOs on Hood in August after OR.
Posted by Poncho at 10:11 AM

Attending shows like this are great ways to keep up with what is going on in the industry and checking out new on the market products.