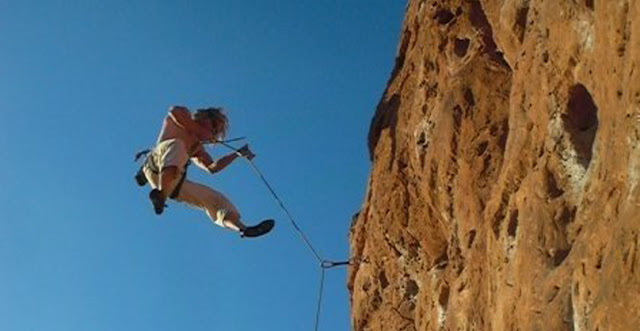 OK, every blog is just an opinion.  And everyone has one.  An opinion that is.  Some are just more ill informed than others.  Some are simply ignorant.

Sad as Tito's death is let's not make it something it is not.  That much Andrew has right.

Some more opinion?
The rest Andrew hasn't clue about and totally missed the point.  In my opinion of course and with all due respect.  Andrew has at least earned that respect.  He's simply wrong from my perspective.

About once a year I get the chance to mentor some kid. (anyone under 40 is a kid to me these days btw)   Pity the poor souls!

Hell I am a only a shadow of my previous self, literally half the man I use to be when I was leading trad .12s from the ground up.  And those ascents few and far between mind you!

Every time I start a new mentorship I am reminded of  and generally am enticed for the obvious reasons into recounting all the injuries and deaths I have seen or been privy to in 45 years of climbing.  And I have a damn short list  by comparison to a few friend's intimate lists.

This is as close as I have come.

Mind you I have taken dozens of falls rock climbing.  No clue how many... but dozens sometimes on just one climb!  And only been hurt 3 times.  Two early on and only the one recently that was serious.  My longest?  A 70' footer.  Which had me pumped up on Adrenalin for hours after wards. (another mistake btw)

So why the opinion?

Every single person I have mentored in any fashion has been a relative new climber not just a new leader...on rock or on ice.  And every one of them is in such a hurry to lead...it boggles my mind.

Why?   Leading is harder in every way imaginable.  Leading is more dangerous.  Leading can get you killed if you make a mistake.  And it doesn't even have to be a big mistake.  Tie the knot wrong.  Rig your hardware wrong.  Misjudge your own abilities.  All unhealthy things to do climbing or leading.

Climbing is a serious and likely fatal sport if you make a mistake.  Just because a lot of people do it these days...doesn't make climbing SAFE!

Take some time.  Enjoy the top rope and try to learn what you can while you are there.

You just don't know what you don't know.  But the secrets come easily and quickly if you open your eyes and mnd.

I could so easily argue all of Andrews points...but why bother?

Climbing and gravity don't care how old you are or how hard you can climb.  Make a mistake and you will pay the price.  Simple as that.

That is what I have learned climbing.

The rest of the opinions?

I feel the loss of each dead friend and I have felt the pain of each of my own injuries and mistakes and sometimes another's mistake!

We all make choices and mistakes.  If you fook it up?  Own up to it......if you are able.  And move on.   I'm proof even an idiot can live through a lifetime of climbing and still (mostly) enjoy the effort :)  It is having the patience to live through, "the you don't know, what you don't know"  part that can be difficult.

and for the exprienced alpinists out there another cheerie report of life after death and other fool things to do in the mtns.......

http://blackdiamondequipment.com/en/tripreports-colinhaley-alaskacrevasse.html?q=colin%20haley
Posted by Dane at 10:50 PM