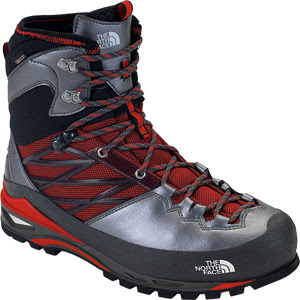 
My first experience with North Face climbing boots was when they made La Sportiva a part of their corporation a few years back.  I bought two pairs of La Sportiva boots on sale when that relationship ended.  A pair of the first Trangos and the original Nepals.

So when I heard about the "first" North Face climbing boot I was at least mildly interested in the end result.

Seems North Face has saturated the blogger market with free boots to get the word out on the new Verto S-4K GTX.  Smart marketing on their part.

I own or have owned and climbed in a lot of mountaineering boots.  Boots suitable for technical climbing on the South Pole and boots suitable for a summer alpine scramble in the Sierras or Cascades.  So there is a lot of leeway on what manufactures and users define as a "climbing" boot.

I have friends who use similar boots to the new Verto S-4K for much of their own summer climbing in the Cascades.  The La Sportiva Trango S Evo GTX  and Scarpa Chamoz GTX come to mind when comparing like boots.

North Face was also smart in using the obligatory red and silver colors on their new boot.  It is now easy to  confuse the La Sportiva Trango Extreme Evo Light GTX  (an actual fully featured climbing boot)  with the North Face  Verto S-4K which is not.

That doesn't mean the Verto S-4K isn't a good boot.  It seems to be from my perspective as long as you understand its limitations.  For one it isn't all that warm.  But as warm as the red La Sportiva Trango Evo or Chamoz GTX  I think.  And because of the Gortex equally as water proof.   It isn't all that stiff  in the sole nor is it intended to be.  So it is easy to hike in.  It fits my narrow feet and heels very well and it seems to be is slightly more robust that my Trango S Evos.  I like the fully bellowed tongue.  And how comfortable this boot was out of the box.  That alone should sell a ton of them.  They weigh in at 1# 15 oz per boot in my size 12s.   The red Trango S Evo weighs in at 1#13oz in a comparable size 45.

The Verto S-4K  needs a basket  for the front of the crampon.  But it will take a heel lever.  They would work fine for any of the NW glacier slogs mid summer.  But that is the limit of where I want to use them when it is cold and wet.

The soles are likely the best available for rock climbing in boots.  It is the Vibram® MULAZ.  Same sole on my beloved Scarpa Ultras and half a dozen other pairs of similar lwt mountain boots that directly compare to the Verto S4K.   The soles are closely trimmed and the low profile toe lacing allows you to take every advantage the sticky rubber on the MULAZ.

Boots for me are first all about the fit.  The new North Face Verto S-4K last fits exceptionally well  on my foot.   Sad that the style of boot isn't one I use very much.

At least the sample boots I received are made in Romania.  I have to say I am impressed with the end result.  Rightfully or not my feet feel better trusting them to a European factory than one in Asia.  I am hoping for great things from the  future technical boot line up.

It is not a highly technical "climbing" boot.  But it will do anything a Trango S or Scarpa Charmoz will.  So it is in good company.  It could be lighter.  But it is within  ounces  of the other two boots for comparison in my size.   But I had hoped the new contestant would win the weight comparison with a knock out.  It didn't.  Neither did they hit any surprise price point.   The buy in is steep at $350.  Same as the Trango S Evo GTX.


As a first effort for North Face?  They did extremely well.
Currently available in the UK.
The company spiel?

Inspired by the endeavours of The North Face’s team of elite mountaineers, the Verto S4K boot delivers absolute best-in-class technical fit and performance for the most demanding alpine conditions.

Looks like a pretty cool boot. I'm anxious to see how it performs. I look forward to reading reviews and trying out the Scarpa Rebel Carbon as well. A comparable boot to this one in purpose, but not really in weight or price, it sounds like.

From the numbers I have seen on the Rebel Carbon it will be right in with there with the boots I have mentioned here. Nothing huge for a weight drop even though the price point just went up.

It is a GTX half shanked boot. Performs pretty much like the Charmoz and Trango imo. Only advantage I have seen so far is it fits me a little better than the other two.

Dane, on the subject of 'b2' boots do you have any experience of the scarpa triolet pros in comparison to the charmoz? Just interested as the triolets aren't available in the uk and seen pretty similar on the given spec.

I don't Andy. But a buudy who works retail locally said this, "They fit differently from Garmont Towers, Sportiva Trango S Evo, and Kayland Apex XT. The Triolet has a roomier toebox and fits a higher volume foot better than the Trango S, but it's also heavier. What you get for that extra weight is improved durability. The leather construction takes a beating from scree, snow, etc. a lot better than the fabric panels in synthetic boots." Had the Apex myself and I wouldn't consider it in the same catagory so how true his observations are I don't know.

Rebel Carbon comes in at 1lb 5oz according to the Fall/Winter 2012 catalog, about 1/3 lighter than the others listed. That is not to say that Scarpa's listed weight is 100% accurate. That weight could change quite a bit on a home scale. We'll see.
I like the Trango fit myself, so I am quite excited to check the fit on TNF. I'd take a great fit over a little weight savings.

I guess I am comparing size 42 rebels to 45 trangos. Not a real fair comparison.

Interesting post about the TNF boots. On a slight different subject, I have learned a lot from reading your extensive comparison about the La sportiva Nuptse, Spantik, and Baruntse. I have the yellow Koflach. What is your opinion on the comparison of warmth and technical agility of Koflach arctis expe vs. the Nuptse? Thanks a lot!

Jane?
Koflach arctis expe vs. the Nuptse? Both good boots, both dated now. Koflach is likely warmer, Nuptse likely will climb better. But remember you are talking several generations of boots here going back more than a decade now.

The just one of exception could possibly be the north face sale uk .

I'm not sure about climbing but I think these boots are great for trekking in all types of terrains. I used them to trek to the Everest Base Camp. They are sturdy and have great ankle support. I had to order a size and half bigger than my normal shoes size. I had no problem with blisters. I didn't find them very warm though. My toes were freezing when I was trying to climb Kala Patar.