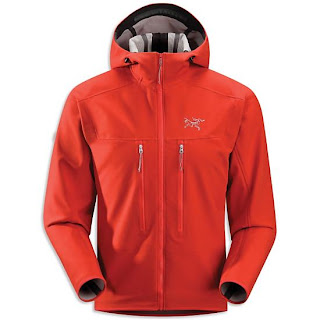 I found this link earlier today.  Haven't seen or used the new Arc'teryx Acto.  But I agree with much of what the author, Jason Kruk has written here.  Different combos, looking for same results.

"Arc snuck this beauty onto the new fall '11 website without any fanfare. They should have made a bigger deal, though, it's the best thing to happen to softshell jackets ever.  I had given up on softshells for my upper layers. The once game-changing Gamma Jacket hadn't received an update in far too long. The material was too heavy to justify using on a serious alpine climb. It didn't breath particularly well, either. I would sweat like a pig while climbing or working hard on the up while ski touring. I switched my systems to a lightweight fleece layer like the Delta LT and a Gore piece on top like the Alpha LT or new FL"

Enough said that I will be checking the Acto out asap.

more from a little digging on the Acto

I thought the Acto sounded good enough that three days after posting this blog I had one here to play with.  During the winter of 2008/9 I had a very similar fleece jacket from Arcteryx that another Arcteryx sponsored climber used and promoted.  Price was similar but mine was without a hood.  It did breath well, and shed water fairly well even in our wet and rainy climate here in the NW.

It is a very similar thickness to the Acto gridded fleece.  But it had better cuff detailing and a more trim, more athletic fit.  It was made to be used as a mid layer piece as well.  Soft grid pattern fleece on the inside and a hard finished soft shell on the outside that other layers moved freely on.

I don't remember the name of that specific piece from Arcteryx for sure but I think it was an earlier version of the Epsilon AR Jacket.   Arcteryx lists the Epsilon and several others as "hard fleece".

After seeing the Acto I can say I am a little disappointed on the fit and detailing on this $300 garment.  And like my previous garment before it, I am not sure I can find a place in my clothing system, either climbing or skiing, that the Acto makes much sense compared to others I now use.
If you can take a look at one I would to make up your own mind.  I think part of the problem is we all seem to want a lwt version of the Gamma MX.  The Acto promises a lot and doesn't do much for me @ $300.   The Gamma MX seems a steal at $350 by comparison as does the Epsilon SV Hoody @ $225.

I haven't even bothered to look at what else is available from other manufactures for similar style garments.  But may be you should if the Acto sounds enticing.
Posted by Dane at 10:53 AM

It looks and sounds incredible.

I'm also pleased and impressed that Arc'teryx has gotten their price point under control lately, especially with regards to gear aimed towards climbers/alpinists (this looks pretty reasonable at $300, the Atom SV/LT hoody line at $250/$200, etc.).

NM,
Funny you should ask. I have something like $5000 plus worth of current state of the art shells on loan here right now for a field test and review I am planning.

Sadly Eddie Bauer is no longer making the Frontpoint. Which i think is a mistake.

But it is a direct competitor to any of the jackets I have here now for review and obvioulsy better than many of them. The FP can be found for $70 on Ebay at this moment. Which simply amazes me.

Why are the soft shells out all insulated? I find them harder to layer with and far too heavy. This Acto hoody is 18 ounces, too bad they don't make a simple shell under 12 ounces, like their hardshell cousins.

Daniel, I got a Arc'teryx Venta in today and you are correct it is insulated as well. Weight is 20oz. Take a look at the hybred Hyper jacket by Marmot. 12oz.

I'm with Daniel on this. My favorite and most used soft shell is an old Patagonia Ready Mix. 14oz, dries super fast, just enough stretch, great breathability. Always wondered why they made something heavier or why no one else made something similar. It seems like a 10oz Houdini or Squamish would be a great jacket for a lot of conditions. A little beefier, some stretch, and a pocket or two....

I have a Squamish and it is a decent shell. Just depends on the temps you are dealing with and the insulation required.

Squamish is good while you are moving and the sun is up but more of a summer piece than a winter one for me. Perfect on Rainier in good weather in mid summer.

Not so useful mid winter although I have used it some in the icefields and in Hylite.

I bought my wife a FrontPoint for $48 on closeout.

Another thing that I don't like is cuffs that don't adjust, I guess it may not be an issue depending on what glove system you use but if my shell is going to be over a 18 ounces might have some more features.

i was just about to comment on how well priced it is. I noticed it on their website a month or two ago and was very curious, very happy to hear this, again because the price is so low and the jacket so good

I would be interested in a side-by-side comparison of Arc's Acto and something made of the NeoShell material (Westcomb Apoc or Marmot Zion) and then the Marmot Hyper. Am I comparing apples to oranges? All are softshell, but it sounds like weight, stretch, fit, breath-ability and "insulation" vary amongst these. You mentioned that the Hyper had the best stretch and fit. I am interested in owning only one softshell and I certainly don't want to commit to one only to wish I had committed to another. As the others have said, the price tag on the Arc is "better" than their usual high price tags, but the price of the Hyper is even more attractive. Does the Hyper live up to the same quality construction that Arc produces? Weight is also a concern of mine.

JP, I am trying to get a Acto to test in out up coming fields tests.

But not sure it is going ot happen.

I really like the Marmot Hyper for fabric first and price point second. But with any of these jackets you should try them on first. The Marmot Hyper won't take much abuse I suspect where some of the hybred soft shells easily will.

Some are crazy technical fabrics that makes me hard pressed to tell the difference between a soft shell and a hard shell. Either can now be found in stretchy form but not all are.

Several have mentioned it. I am not a fan of cuff closures and pit zips among other things if the garment is designed right. I like really simple. Done right the designs and construction can fix a lot and leave even more on the design table. But you have to decide what best serves your needs. I would never intentionally buy a jacket with pit zips. (now I have three) There are others who won't own a shell without them.

I think a lot of it depends on where and when you climb. I have little interest in "warm weather" alpinism so no pit zips make sense to me. I am not going to be in a shell for the uphill in most weatehr. So I want some weather resistance/proofing on my very breathable outer layer. But I would ratehr it breath than no breath.

On the other hand mesh under arms like the Atom Lt I find really useful.