OK, I have already taken some shite for suggesting that a $30 REI "kiddies" pack would be a good alpine climbing pack. As good as anything available at any price for what we are using them for.

I've now been using one for just over 6 months and stand by the suggestion. After making this post one of our local "stone killers" sent me an email in part to support my suggestion. Dan was kind enough to write the bulk of this review which is quoted much lower downw the page and high lighted.

For my part I have used the Flash 18 in the alpine on ice and rock. I've taken it on two long ridge traverses and more bush whacking than I care to remember this summer. It has become my "go to" climbing pack. I don't want to carry any more than I can get into this thing. Which has proven to be more gear than you would first think possible.

I have a 21" back. That may be not be normal @ 6"1" but not deformed either. Most of the current "love fest" small alpine sacks don't come any where near fitting me. And a poor fitting pack is just as annoying as a poor fitting pair of shoes imo. No matter who tells you "it" fits.

Seriously, this is a very good, super light, alpine pack for my own needs. Pack body is 140-denier ripstop nylon, remarkably abrasion resistant for such light material, polyurethane coating offers weather resistance. Almost anything is repairable with Seam Grip. And it is 9.2 oz total weight. You choices are a $30 for a pack that fits or $150 for from the Gucci crowd that doesn't and isn't any lighter. Easy decision on my part.

Update- May 2011
6 months later and I am using the Flash 18 ski touring and still loving it.  That is a set of 9# skis and binding and you never feel them on the boot pack.  Not the best pack for the job but not the worst I have used either. 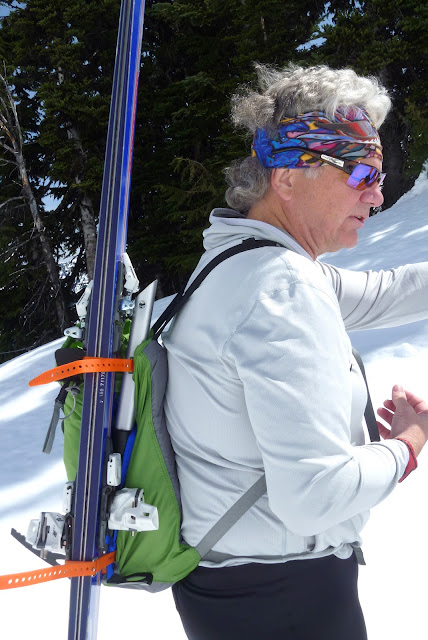 Not just me taking this pack out. Dan Hilden used one on his and Jens Holsten's repeat of the uber classic, "Megladon" on Goode. Dan's words:

"As someone who has spent a lot more time climbing and going to school than working over the years, I have often struggled to get my hands on decent gear. I once spent a week without a sleeping bag in the North Cascades because I couldn’t afford a lightweight one. I borrowed ice tools from friends and used my straight shafted third tool for some pretty tricky stuff for two years after selling mine for travelling money in Peru. My old lightweight climbing boots are held together by epoxy, caulk, and seem grip, and are better for a laugh than they are for keeping my feet warm or dry. Pretty much all the gear I own I get used or find on sale.

After soloing the Northeast Buttress of Goode in just over 24 hours from highway 20 in 2009, I knew right away that it had not been enough to show me what I wanted to find out. I had been mentally preparing myself for the climb for years and by the time I set out to do it there was no doubt in my mind that it would go. I decided to try to climb Megalodon Ridge in a single push because I really wasn’t sure that I could do it. 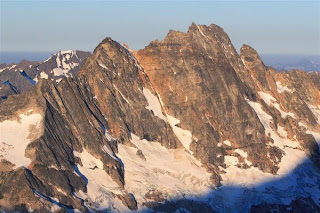 My partner for the trip, Jens Holsten, is a certified beast and could have finished the job even if I pulled the old Eiger Sanction move of hiding a six pack in his pack, but I knew that I would have to go lighter than I ever had before. I spent over a month fine tuning a list of what I would need to carry and how much it all weighed. Stripped down my trusty old pack (which I’m told smells like a dead animal) weighs about 2.5 lbs. I wanted something lighter and was on the lookout for a used Cilogear or Go Light or something similar when I found the REI Flash 18. I always prefer to support smaller businesses, but since the Flash was only $30 and weighs 10 oz, (9. 2 oz on the scales) I didn’t think twice before ordering one.

When I got the pack I cut off the waist belt since the load would be light, cut a piece of foam sleeping pad to slide in the hydration pocket to make it more comfortable and give me some ground insulation for unplanned bivys, and threaded thin stretch cord between the gear loops so that I could stuff a jacket or climbing shoes where they would be easily accessible. On the climb I found that the design is good and simple. The open/close system is quick and easy even with gloves on. I can’t think of any worthwhile complaints. Obviously this thing is not going to be as durable as a pack made with heavier fabric, but it stood up to quite a bit of bushwhacking without a single tear, and it is light and small enough that you will probably be climbing with it rather than hauling the vast majority of the time. Since it came from REI, I can return it if it does fall apart after a few more uses.

The day of the climb my pack held our small rack, my personal climbing gear, an extra shirt, balaclava, socks, stove, pot and fuel, my headlamp, water bag, an ice tool, rain jacket, and a lot of food. All that I needed and nothing more. In 27 hours we covered about 35 miles, gained and lost over 10,000 feet, and climbed a grade IV+ route on the biggest mountain in the North Cascades National Park."


REI has a rather unique way to hang the shoulder straps and make this tiny pack fit even my long back. I suspect you'll see the usual suspects copy it any time now if they aren't already. The Flash 18 is tough enough to come out of two bushwhacks unscathed that literally shredded my shins and hands. I too cut a thin piece of foam to set in the hydro pocket but left the waist strap for balance boulder hoping and climbing. Although it pays to note it weights only 10oz and I'd treat it accordingly. I have BIG plans this winter for mine. I think this pack ROCKs!

I own 5 custom made packs and two that are off the shelf. This is one of those two and I would buy another one in a heart beat if this one disappeared. Can't say that for many packs I have owned.

Now what you have all been waiting for, our newly discovered gear guy, "Forrest"!
If you know what to look for between the two revues it soon becomes obvious this is a great pack!

Unknown bloggers photo (thank you!) ...but a great shot of the harness! 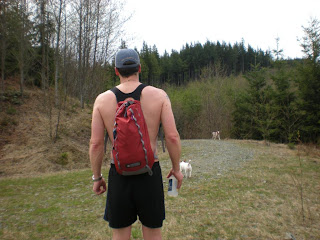 I have heard that you have something of a shoe (mountain boot?) obsession...for me, it's the same with packs, so I was intrigued to read about the REI pack. Looks good. For now, for this kind of pack, I'll stick with my old Go Lite.

I am curious about your thoughts on bigger backs, for example, a pack for ice climbing in the winter, or an overnight alpine climb. What do think about the three main players for serious pakcs: Cold Cold country, Wild things, Cilo Gear. Any others? What about specific features: ski slots, tool tubes vs. new style attachments, removeable waist belts, back pads, and so on....I have owned a Cold Cold World pack and a Wild Things pack and was v ery happy with both. Recently, I ordered a custom Cold Cold World pack, and was very impressed with their willingness to include small but important modifications. Great company, in my opinion. In any case, I would love to hear your thoughts. All the best.

Hi Bruno,
Golite Ion is one of my favorite mini packs. Sadly they no longer make it . Wish I could find another in a long.

I have used Wild Things, CCW and Cilo. Used Wild Things stuff back in the early '80s before they were cool. But pretty dated these days. Big fan of Randy's work at Cold Cold World. (CCW) Should be no surprise as he used to sew for Wild Things back in the '80s. He has graciously made me several custom packs in the last few years. All have been awesome. Besides this REI Flash, 18 Randy's custom packs are the only ones I have used seriously in the last couple of years. None cost me more than $250.
Randy has built some "white" packs and been asked to sew other manufacturers' labels on his packs by sponsored climbers. Others just love to take credit for Randy's work.

Randy is the only pack maker these days that actually has a back ground in hard alpinism and I think it shows in his gear and the detailing. He also realises what a pack is worth and what is worth putting into them. Honest manufacturer. Not everyone is.

I am big into pack fit..which some makers aren't. And very simple packs for climbing. I have a couple of blog posts started on my choice in alpine packs by CCW. Just haven't gotten around to finishing them. May be this will get me back on them. Thanks for the push :)