The last two winters some of my favorite climbing gloves have been by Mountain Hardware.


Specifically a $50 "go to" glove for me, the "Torsion" (or it's kissing cousin the OR Vert). The Torsion isn't totally water proof but works great on steep technical ice unless it is really wet. For colder conditions or a lot of water I have been using the OutDry lined "Hydra" which is a stellar technical glove and cheap for what you get I think, at $100. It is warmer than the Torsion but still light enough to climb hard in. It is an exceptional pattern for technical climbing leashless. More details on both of these gloves back a ways in the Blog. Worth the extra click if you are are looking for gloves. 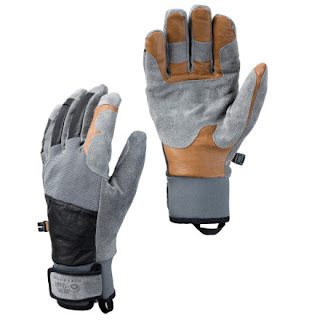 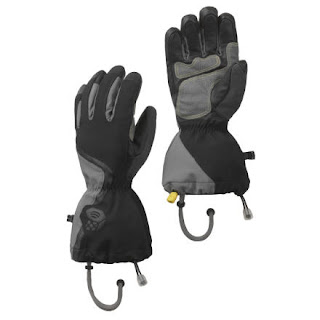 Just picked up two of Mtn Hardware's glove styles that are new to me and I think worth checking out. Although prices have obviously gone up. Both are again lined with OutDry. Which seems to really work better than Gortex in similar styles. And both are leather reinforced in the heavy wear areas. The "Pistolero" as a light weight, mostly leather, highly technical glove that will replace my Torsions I think by the feel of them @ $100. And a slightly warmer version of the "Hydra", with a removable wool/synthetic liner, the "Typhon" @ $130.00

I get to look at a lot of gloves locally with REI, Mtn Hardware, Feathered Friends and Marmot all having good size retail stores local to me . These two models from Mtn Hardware are some of the best I have seen for my own use. Gotta like Mountain Hardware's life time warranty as well when you are dropping C notes for a single pair of gloves likely to get trashed in less than a season.


Fit? I wear a XL in most every glove. And it needs to be a generous XL. Hydra is fine in the XL, maybe a little loose. Pistolero is perfect, same slightly loose fit. The Typhoon is a little tight, maybe the same sizing pattern (I'd bet $ it is) as the XL Hydra but the wool/synthetic liner makes them a little tight. I may be wrong on the sizing because the next two pairs I mail ordered don't fit tight even with the wool liners. The glove build pattern however is not the same. The Hydra still has less seams and less bulk because of it. Looks like enough improvement on the Hydra durability wise though with the dbl thickness leather wear pads and leather finger tips to risk it and pay the extra $30. if you are going to do a lot of raps in them. The wool liners aren't worth the extra $30 to me. But I was thinking a really light polar fleece liner would work better and seems similar to the close fit as my BD liners in the Hydra.

I tried on 3 pairs of each to make sure I got the biggest pairs and all seem the same in size.

If I wore a Large and wanted a warmer glove than the Hydra the XL Typhon would rock :) But a XL Hydra would as well with a light weight liner of your choice and save $30.

There are a few minor improvements and the extra leather reinforcement in the palm and fingers on the Typhon. But the Typhon's build pattern is way more complicated and a bit more bulky. Are the changes worth the extra $30.00 compared to the Hydra for you? It is a toss up for me but it has convinced me to use the Typhon as my cold weather rap glove and save the Hydra for climbing when I can.

I'll write more once I get to use them as intended.
Posted by Dane at 11:13 PM

Have you looked much at the Marmot Amphibian? What are your thoughts on pros and cons for a glove like that for leashless climbing?

I have. Not a fan of anything with a sticky rubber palm. It can make setting screws in a difficult position really hard if you ever rap your off hand on the tube, which I do at times.

If you are just dry tooling almost anything will work. Rapping, rope on rubber can be sticky as well. I like the rope to be able to run a bit.

Lots of options in this price range. The OR Vert is my favorite to date. Everyone developes a taste for what they like in details for their own gloves. No right or wrong answer as long as they don't hinder your climbing.

Gloves like the Amphibian are something I like to solo in. The REI Minimalist is a great glove as is the Mtn Hardware copy, the Epic, along those lines but a bit warmer. Neither is easy (like impossible) to dry out so I stopped using them.

The Company's guarantees kept me from loosing anything by trying them.