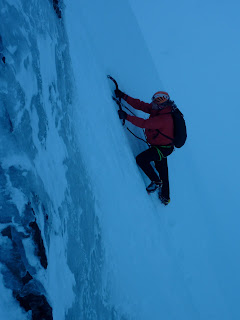 Easy to sit in the office and tap out total bs on a blog. Ya gotta wonder just how much of what I write, am I really willing to do. How deep do I get?

After getting rained out of the alpine yesterday morning at 3AM and then waking up to sunshine at 10AM I was more than a little depressed. For me the 3AM starts are generally the crux. Getting up at 3AM driving to the trail head and then bailing is not easy for me. So, for much of yesterday I planned a resurrection.

But I wanted something different. A new challenge. I wanted to do a climb as light as possible (in my context). All this new gear and technology and I had yet to push both and then myself.

Gear? All my clothing including socks and gloves weighted 3.25# total. For the bottoms I used a set of poly boxers and a pair of super light weight Gamma Lt Arcteryx pants. I added grommets and elastic to the pants legs so I could ditch the gaiters. Two pairs of socks and the silver bullet, La Sportiva's Trango Extreme Evo Gortex boots. The top? A short sleeved, wide open, fish net poly bicycle t shirt, a lwt merino wool zip front and a new Eddie Bauer, Frontpoint jacket, a lwt silk bandanna and a polar tech pile head band. Gloves were the REI multi-sport Minialmist. Big day for Petzl! Tools? Nomics, with BD umbilicals. Crampons were Dartwins clip-ons and my helmet was a Meteor, harness a Hirundos. I also bagged a 65m 5mm rap line, a small rope Reversino, a long spectra sling with 3 ultralight biners, 2 wire gates and a locker.

Temps were between the low 30s walking in and the mid 20s on the climb. But I still forced myself to start in the fishnet t shirt and the silk head band. Yes sir, it was a little chilly for the first few minutes in the legs, more than the torso, surprisingly.

2 hrs later and just short of the ridge I added the EB Frontpoint wind shell. In the wind and fog on the ridge crest, while others were adding belay jackets, I peeled the Frontpoint jacket and added my dress weight (very lwt) Merino wool sweater ($30 from a Men's Warehouse sale) and zipped up. The other climbers already on the ridge were well kitted for the weather as long as you weren't going to actually move!

An hr. later I was on top and comfortable. My clothing still dry. The first climber up behind me (who started before me) was complaining that he had to take a break and peel some layers before he could continue. He was both, over heated and wet.

C2C ...even with breaking some trail I had set a personal best for the route and had cut hrs. off my time. Better yet it was the most enjoyable time I have had on the climb. While the conditions were the hardest ice conditions I've seen there.

Good reminder for me to be selective of your gear and pay attention to what it weights. Wear less, be more comfortable and climb faster! Good day out for me. But obviously in the grand scheme, not all that deep :) 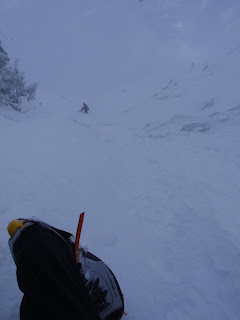 A 24/48/60 hr follow up on this little adventure. Typically I would be dehydrated the evening after a climb and well into next day. I drank less on the approach and climb and wasn't dehydrated later that day or in the next 48 hrs. Which means in this case I could carry less weight in water and still be comfortable. I had less muscle soreness than usual. A lot less. I ate a bit of sugar and carbs and a drank a pint of water after I arrived at the car and had a really hot shower when I got home. We ate a typically light dinner that night. I did an casual, hour long, hike the next day but recovery was much, much faster than usual.

The one thing that really sticks in my mind about this trip was being able to literally run out the last mile of so of the trail and actually thinking it was fun! I was having the rare day physically. But I suspect that "rare" day might well be repeated on demand given the right circumstance and preparation. That idea obviously deserves further investigation and documentation.
Posted by Dane at 9:37 PM

How do you add grommets? Im interested in the Gamma MX softshell pants but I dont think it has grommets.

REI sells a grommet kit in their repair section. Takes 10 minutes or less to set 4 grommets in a pair of pants and tie some shock cord on. All the Arcteryx pants come with a tie down system that works well already. So no need.