Getting schooled in Chamonix.

Intitial gully of the Burnier-Vogler, N. Face of the Midi, yesterday. 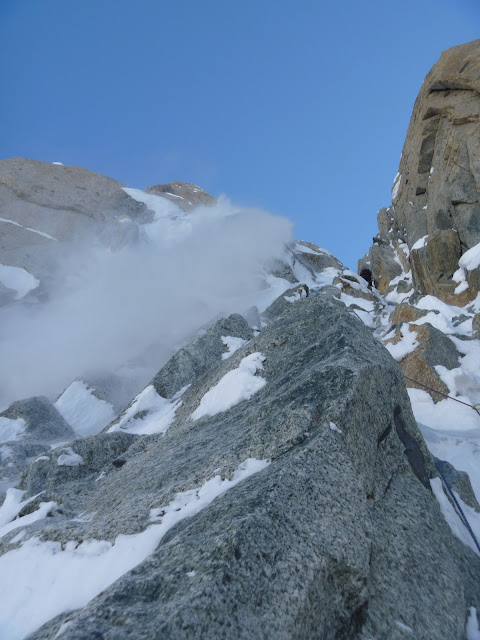 A year ago while climbing in the Rockies,  my climbing partner asked, "Where would you go to learn "alpine climbing"?

My quick answer was Chamonix. Every good alpine climber that I have admired over the years has spent some time here.  And I have always thought that what they learned here was a major influence on their climbing careers.

I've been here 12 days.  In that time we've had 40cm of snow, in two dumps.  And as much as I know alpine climbing is all about conditions, I've generally ignored that and climbed anyway.  Wallowing in cold dry snow has followed.   While wearing all the clothes I own.  A few interesting lessons for me already.

No Neve to be found here :)  There was however lots of waist deep snow being shed off the hard, dry ice. 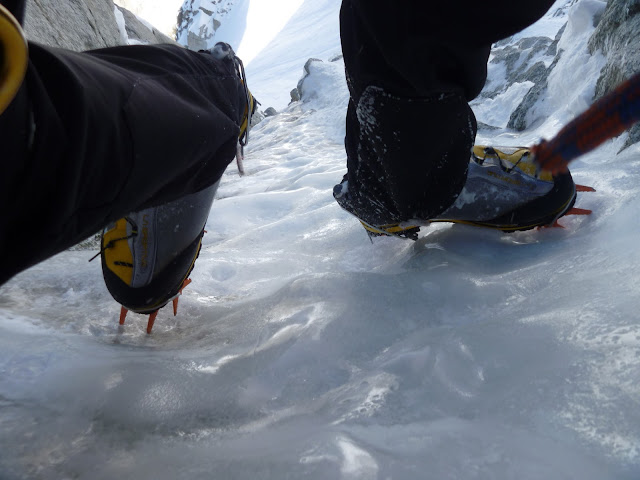 It could be worse.  But at the moment this has been the only result of being slow on route.   Bivy in the WC on the Midi station.  Breakfast and a coffee in town followed after the first lift down the next morning.  If nothing else climbing in Chamonix is sureal. 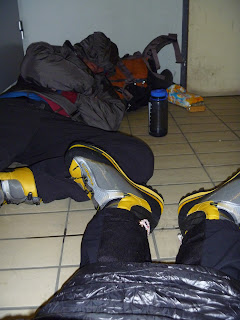 Thank goodness for the civilization with WCs to bivy at. A little chilly for a snow cave?

Excellent, sleeping on the midi toilet floor without any bivy gear or food for the night is a perfect sign of initiation into Chamonix climbing....

its worth remembering that if the toilets are already full of climbers you can go up stairs and sleep above the toilets, the floor is quite warm as its heated from below, maybe one of the few if only bits of alpine advice based on experience I can offer you!