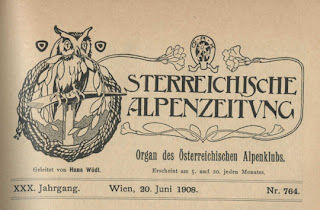 This is an interesting read  I had not seen previous from the inventor of the modern crampon, Oscar Eckensteinn written in 1908.

From the original,
"More than thirty years have passed since I first ventured into the Alps and in this time alpinism has made many advances. One need only compare today's rock technique and climbing knowledge with what it was three decades ago to be impressed! But there remain sections of alpinism that look the same as they did fifty years ago. This is especially true of ice technique and everything involved with this type of climbing. I often read trip reports from alpinists, (both guided and self-lead, who are respected as good climbers) who often write that they were forced to cut steps despite the fact that they wore crampons."

http://www.alpinist.com/doc/web12f/wfeature-eckenstein
Posted by Dane at 11:02 AM