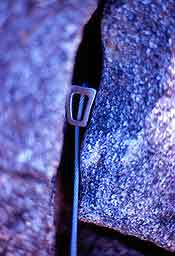 "In 1991, facing declining sales, Yvon Chouinard applied the Buddhist principle ahimsa, or "do no harm," and commissioned an eco-audit of the company's operations. Following the audit, Chouinard made the risky decision to use only organic fibers in Patagonia's cotton products. Sales and profits rebounded. "Every time we've done the right thing, it's ended up making us more money," Chouinard says."

Here in the USA we are about to elect a new President.  No matter what your choice take the time to educate your self on the issues and then VOTE.  You only get one so make it count!

I find politics interesting and  seldom in a uplifting or enlightening way.  But what it does do for me on occasion (this election being one) is remind me of what is really important.  Like all my writing always remember my views may not be your views.  My concerns may not be your concerns.

But here are a few thoughts on how we as a (climbing) culture influence the world.  The ideas should be important to all of us.

"Do No Harm."  Chounard's mantra for Patagonia and sustainable business model.

I don't often consider myself a business although in early Feb. every year I start doing my business taxes before doing my personal income tax.  When I look at the products I produce my intent is that the end result will last several generations.  Goods produced by hand and passed from father to son, many times over.  I am lucky to work in a niche industry that my products will hopefully see such a long useful life span.

There was a first time I regretted producing an item from steel.  Not because it would last a 100 years or more.  And not because in the wrong hands it could easily cause great harm.  I regretted it because the steel I used that could have easily lasted 100 years would only last a few days....may be even only hours for its intended use.

I felt as if I was wasting a precious resource.  Which of couse I was, several in fact.   The resources were the energy, human and physical,  that it took to produce the finished product and the actual steel involved.  That product was a ice tool pick. 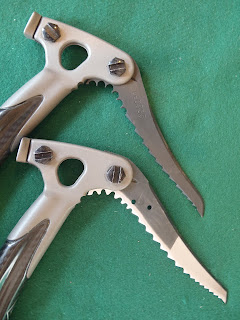 Instead of a tool pick that would last a short time in the grand scale while mixed climbing why not a custom knife that would last several decades so easily?  Same amount of labor, steel and energy involved.  But one was a throw away when done.  The other a simple tool and potential heirloom.  There ceased to a choice for me once I realised where my energies were really going.  No matter how much I like ice climbing...I don't like wasting our limited resources or my limited time on this earth. 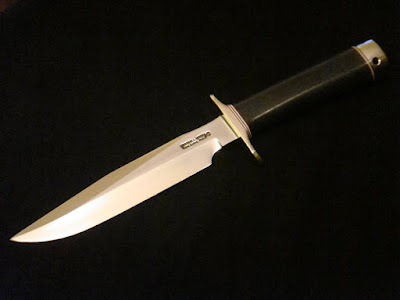 That was  the first time I had asked myself, "Do No Harm?", as a business.

I have asked myself that same question any number of times while traveling through environments that I knew were so very fragile.   Now I ask it more often in less easily identified environments at may be even greater risk.  "What do I want to do with my energy and time.  And what do I really want to do with an expensive piece of steel?"

Don't get me wrong.  The blog is as much a shill for the outdoor industry and rampant consumerism as anything on the net...maybe more with the number of world wide page reads @ 1.25 million and counting.

I own 3 cars and seldom drive the one that gets the best gas mileage. (@ 30 mpg)   I currently own more climbing shells than two dozen guys could wear at one time.  So I am no Angel here that thinks they will save the world.  And believe me, I am aware of that fact.

But I look at the  increase in the climbing population and can still live with it.  Hopefully giving something back now for what I have gotten by being involved.  Glad that I was able to climb when and where I wanted to for the previous decades.  And lucky enough to get on rock and ice that had never been touched.  It is harder to find now.

New climbers have more to over come.  They will have to look harder and go farther to find the adventure I have.  But the adventure and the new stone is still out there.  They will need to look closer at who they choose to emulate.  Lance for example.  It was so easy to be a apart of the  excitment short term.

But Lance didn't climb.   Dave Lama does.  Remember the bolt fiasco on Cerro Torre?  Thankfully over shadowed now by a free ascent.

But weren't you at all curious and just a little annoyed at Red Bull for the sponsorship?    Red Bull has been in our community for a long time now.  And they have sponsored some amazing athletes and projects.  The debacle on  Cerro Torre was not one of them.  But I am not playing the blame game here.  Red Bull didn't add the bolts to Cerro Torre.  Dave Lama's crew did.  Saying other wise is like saying, "it isn't the people killing people"  "It is the guns killing people!

It is not the guns and it is not Red Bull.  It is people in both those instances.

But here is the rub.  And for me personally it is becoming a saddle sore.  We all know that there are things in the world that are poison to the human body.  Child obesity is rampant in every developed country in the world.  Alcoholism is another disease we bring about ourselves.  The cost of tobacco use is astronomical in the US alone.  The USA is the largest supplier of sugar in the world.  Red Bull is only a tiny part of that production line.

But Red Bull sells millions by show casing our sports and our professionals.

To the detriment of the kids that follow the exploits of guys like Will, Dave Lama or most recently
Felix Baumgartner's jump.

Been awhile since JIm Bridwell did ads for Camel.
It might be the time to rethink "do no harm" and see what we can improve along the way.

Right after my morning coffee ;-)

Well said Dane. As far as owning to much gear - I always tell my wife that every dollar I spend on outdoor gear is probably 5 dollars I won't have to spend on healthcare cause I'm out of shape in later years. Provided I'm safe of course! Thanks for the great blog!

Nice post Dane. Its nIce to hear how people justify their own environmental footprint. One of the best things we can do it buy quality products that we like so much you use it to its full lifespan. Hope all is well and that your still getting after it!
Jon

That was nice, in the sense of exact, demanding, as in to a nicety. Like a sharp, well honed knife, handed down.

Excellent post. That's something I've been thinking about a lot lately. It's so satisfying to make something by hand, and it's hard to balance that with what you're making it with and how you're making it. Nice hammers, btw.

I think that while your custom picks won't last as long as a knife, they aren't environmentally irresponsible. I make custom knives and razors, so I'm familiar with the economy behind them. My blades will last for decades, but I consider this type of work to be environmentally neutral. (Maybe a social positive, but that's subjective.)

For one, we use a very insignificant amount of material. The annual domestic usage of 1084fg for custom knives is only half of one melt from a single mill. Just a drop in a very large bucket.

The opposite side of this is that the one-off manufacturing process is horribly inefficient. The custom maker uses insane amounts labor and consumables to make the product the best possible. A production knife with 95% of the quality and durability will easily cost less than half to produce than a custom. A custom knife is a luxury, just like a Leica camera or custom ice gear.

In any case, I bet the alloy you used in the picks wouldn't be ideal for a custom blade. You probably just saved it from becoming a wear plate on some piece of equipment.

It took us almost a year but at least we are driving cars that get 30+ mpg. now. If I drive conservatively that is. Have yet to master that. It aint much but in my small world it is something I am proud to have accompliushed.