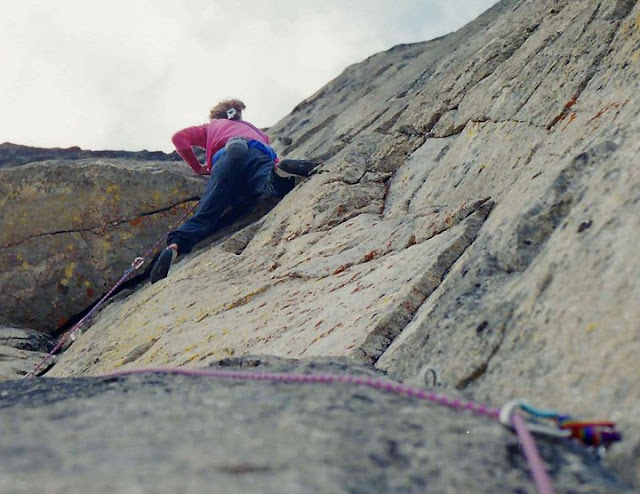 
There are few pieces of gear that have been a consistent staple in my gear collection for a few decades.

I can limit it to boots, pack, crampons, and a set of axes for the most part.  And in that tiem frame all of them have changed several times over.  Except one.  When it comes to clothing two items have remained pretty consistent.  A decent lwt down jacket and a light weight wind shell.

Only the lowly wind shell has literally saved my life a time or two.   Literally considered "emergency equipment" for the most part.  Like in the picture above tied around my waist and unnoticed until needed. 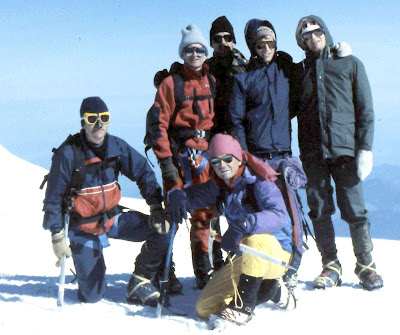 Same shell on the summit of Rainier circa 1984


I generally take one of these along  when the weather is "perfect" in the mtns but I'll be out long enough or up high enough that  the weather can change in short order.   Alpine rock climbs with a good change of a thunder storm or a perfect day on the local volcanos that is bound to be windy at sunrise.  Or for my ultra light trips where I generally end up suffering a bit if my plans don't go as first thought out and I end up huddled around a fire all night to keep warm. 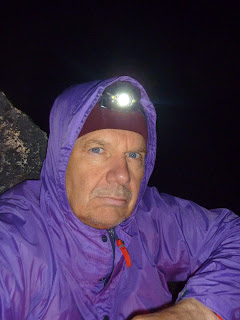 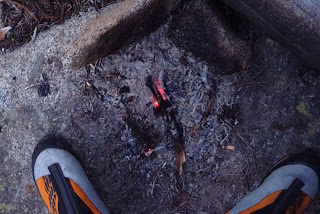 Or when I just want something to add a little warmth and break the wind while while still breathing well as I try to move quickly on a easy approach like walking out to Professors in chilly temps. 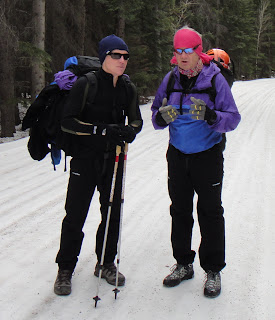 They seem to last awhile and are light in weight (around 5 oz in a large) and for the most part pretty wind proof and breath well.  The best fabrics these days also offer some rain protection with the most modern fabrics.  For my ancient gear I just give them a good soaking to get a DWR with something like Nikwax fabric coating.  And try to keep them away from an open flame and wind blown embers.

I get teased every time I put on my 80's purple Patagonia pull over shells (I have 2 ) because the bright colors gives away the age.  Not like my white hair doesn't!  So while my Patagonia piece is the for runner of the current Patagonia Houdini (retails @ 125 or under, some times WAY under so look around!) of today the only thing that seems hard on any of the them is fire.  After I collected a bunch of pin holes in my favorite shell during an unplanned overnight stop with a resulting fire to keep me warm till morning I went looking for a new shell.

I found three I think are worth mentioning but there are any number of them out there.  Patagonia Houdini is a good place to start if you don't like what I ended up with.

The first up is really the rock star of the bunch.  Camp's MAGIC ANORAK aka Flash Anorak.  Brian (who convinced me to buy one)  has a great write up on it here: 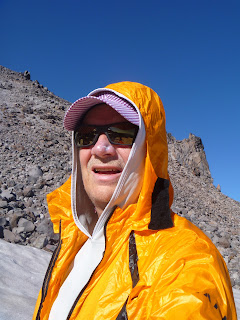 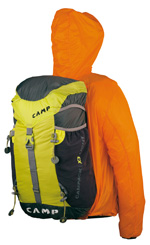 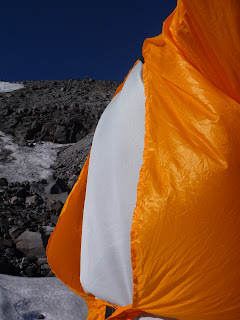 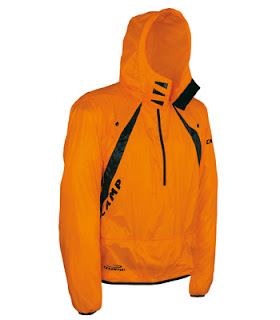 Yep, no back on this one and you cna add or take it off without removing your pack.  At first I thought it only a skimo gizmo for the race guys.  Now it is one if nto my favorite for serious stuff in the mtns.

I think this is not just a Dyneema but Mylar with Dyneema. It is called Cuben Fabric a.k.a CTF3. Joe @ ZPacks makes a jacket, pants and some other stuff from this fabric - see http://zpacks.com/accessories/wpb_jacket.shtml . Price tag is twice as low, though.

This fabric (at least those runs they had a while back) is not so durable and will loose color over time, se here http://hikelighter.com/2012/03/03/zpacks-waterproof-breathable-cuben-fiber-rain-jacket-update-1/ . Maybe they will fix this issue, maybe it is already fixed - I don't know.

What are your thoughts on the helium II from OR? Six ozs gets you a fully waterproof jacket...

OR makes great stuff. I have not used the Helium. But it sounds as good as any of them.

Lots of choices in material and designs with this style of garment. Just trying to show that with the write up,

Nice write up Dane. I've been a big fan of the FF Jackorack, it's about the only piece of gear that comes with me on any and every type of trip (rock/ice, summer/winter). I hadn't seen the CAMP anorak--very interesting concept... And I look forward to hearing more about the NWAlpine jacket--I'm a big fan of a few of their products I've used, but I doubt I'd be willing to spend that kind of $$$...

Nice write up. I'd never really thought to give one of these pieces a space in the kit, but I've been finding lighter and lighter pieces to act as wind/water blockers.

What do you think about Bill's simplicity jacket? Seems to fit in here and comes in under 5 oz for a medium.

Thanks Aaron. I use these type of garments a lot. Always have.
I suspect any of them will work. I do like the Pertex though for the money spent.

I've got an old Baggies pullover windshirt - good for abrasion, and really blocks wind. Ugly colors as I used to not care or notice that at all.

But my most-used is the Wild Things windshirt, right after the label changed to text. Pinkish red, ultralight, velcro cuffs, high mock zip neck. I've worn it so much it's amazing it hasn't worn through.