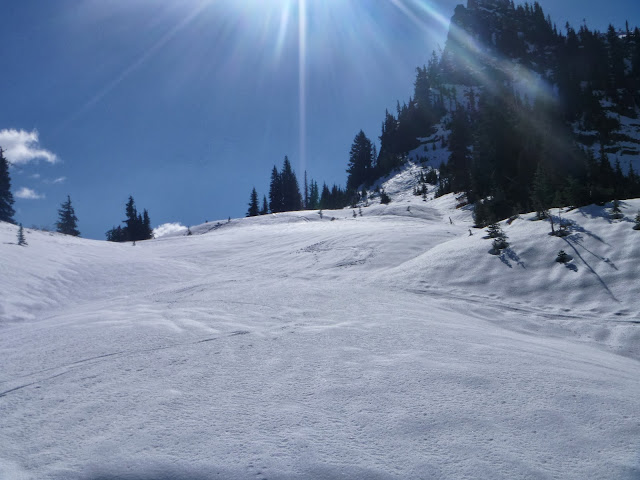 On my last run that day I clicked out of a heel at full speed (likely had dirt on my boot sole when I clipped in)  and took a slide that was embarrassing and a little painful.  I was lucky.  The end result could have been worse. 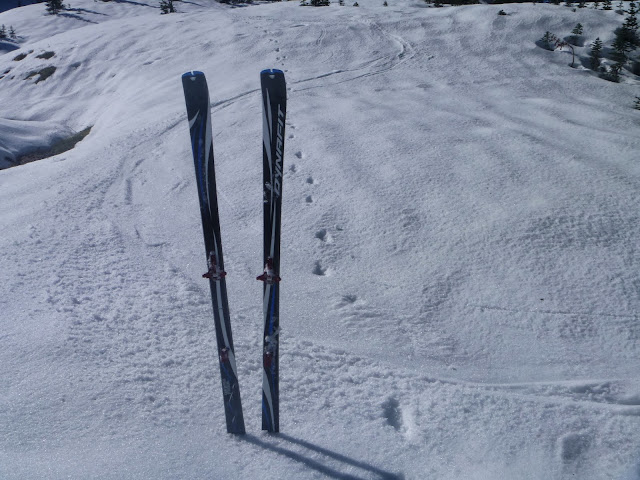 Some of the first turns of the 13/14 season!
I was back at it again in the same area today.   Just across the valley this time but on the same Northwestern exposure.  Today I was lucky enough to do lap after lap on perfect spring like conditions with chalk like snow that turned to perfect corn in the late afternoon sun.  And thankfully a boot pack the snow boarders put in previous and then ignored the 700 vertical they had left me.   I lapped it until my legs gave out.  It was a perfect start to the 13/14 season.

A thought that crossed my mind today?  Not sure I have ever skied in mid Oct. was one.   Without the really light weight gear I have I doubt I would ever ski in Oct, was the other!   4# 4oz per foot including my size 29 boot, binding and ski.  It was some simply amazing skiing if only some 50 or turns per lap.  Enough per lap that I was grateful just to be there.  Not much skiing but enough to remind me of why we all go to the mountains and why we ski. 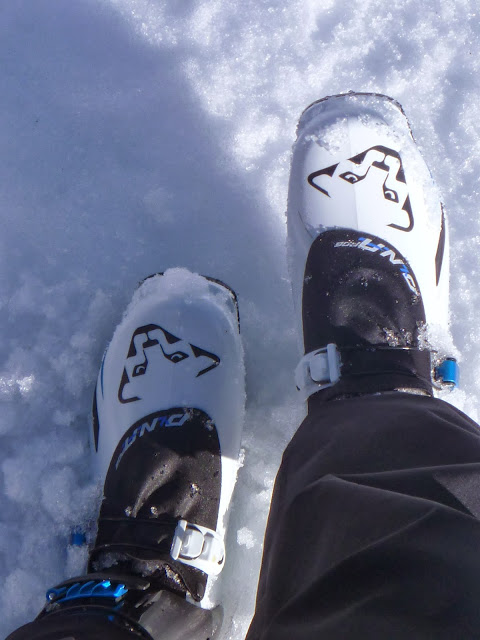 Dynafit PDG, ski and boots.  A lwt combo that is really fun to ski on.
A review will follow on both when I get some more mileage on them.  Right now?  Off the cuff?  You'll want both.   Or a similar set up from any manufacture.  You'll ski a LOT more if you do own something similar.

I don't know that I can really afford a set of race skis/bindings after GPOs and Vulcans, but my inner weight-weenie is saying "ooh, shiny." Maybe I'll pick up some race gear when I can get deals towards the end of the season...

Will your review include climbing in these suckers?

Climbing? Yes...All the usual suspects work for crampons. Light and flexible as they are still don't walk as well as a TLT5.

Buckles do stay closed however. Which is a nice plus. But you have to wear some kind of gaiter or you'll have snow in the boot.

I can't wait until manufacturer's start building race setups for larger people. At 6'5", I need a 30.5 boot and a race ski larger than 160. As more people use skis such as the pdg for speed touring, I hope dynafit and other manufacturer's will expand their lineup to the range of American sizes.

Love that setup; up, down, all around town! I like the way the boots walk too, interesting that you prefer the TLT5 walk mode. Even looks like you're rounding out the package with low tech race bindings? Way to step up your 'light' ski game!

Been using the low tech race for 4 years now. Really like the binding set up. Given enough boot flexibility they are easy to climb/skin with and solid on any downhill.

I miss the little bit of toe flex of the TLT5 on the up hill. But no question...without the mid sole flex the boots ski much, much better.

Yeah, I guess I tend to just forget about the uphill tradeoff of less flexibility because I'm so stoked about how the boots ski, as you say, much, much better without that. I kinda feel the improved articulation of the PDG's (compared to TLT's) makes up for the loss of the 'bellows.' But I also have some foot issues that the forefoot inflexibility caters to. Personal preferences, as in all things...

Love that binding (and the ski, obviously) as well. Hope you have the auto locks! Another 3 seconds saved per transition. Over the course of 6 laps, this may allow you to pull out of the parking lot in front of that other car...

Yep all of them are auto locks. I like the extra bit of security on the down and not having to ever dick with them, in or out, up or down.

Hey Dane how are you soles wearing/is that a full sole or is it a half split sole with exposed plastic in between? It is hard to tell from the photos online. It looks like earlier generations had a full sole all the way across and less issues. I was just about to pull the trigger on some PDG boots and then saw all of the comments....

Correct me if I am wrong but a summery of what I have found so far from various sites:

Dynafit changed the rubber to have more air then earlier generations, which has lead to less durability on rocks.

They will consequently not warranty lugs shearing off, even after two days. If that happens, tough cookies.

Two options: don't walk on rock/climb in them and two deal with it.

Rumor has it that at least one person has reportedly had them/tlt's resoled but that has yet be fully confirmed?

Thanks for any additional info!

Yes at least one pair of resoles done with a TLT tread. No one admitting to it though. Everything else I have documented turned into some what of a nightmare. Working on Dynafit now to offer the resole rubber from the TLT to use on the PDG/EVOs. I suspect that will eventually have to happen if they want to continue to sell boots.
It is total nonsense at the moment however.

Earlier DyNA's had a full sole and harder rubber. No issues with them for the most part.

Mine? I am being very, very, VERY careful with them...which is stupidly annoying for a $700 boot.

I'm also about to strip a pair of TLTs down to as close as I can get for weight in a EVO. At least I'll know I can walk in them. Dynafit needs to step up quickly on the resole and offer some security here for its customers. Hell of a lot cheaper to strip a pair of TLT6s than buy DyNA EVOs or PDGs. Did I mention annoying?