Why a double boot? 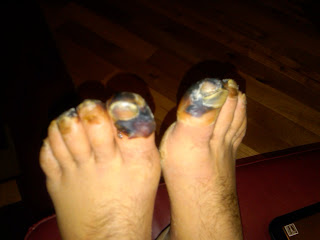 With reviews of the most popular double boots on the blog and more coming of similar models I think the use of double boots might need some explanation again.

The majority of my alpine climbing has been done in the Canadian Rockies in winter or in the Alaska Range in spring.

In both places a good single boot and decent gaiter will get you by, generally, in perfect conditions. The problems arise not in the perfect conditions but in the exceptions both in the weather conditions and temperatures. As important or maybe more import is the physical condition of the climber. 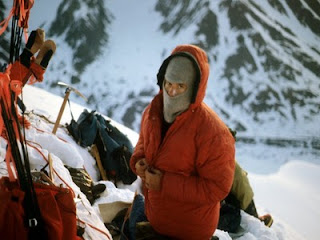 Open bivy high on the North side of Deborah May '76


Frostbite is not generally a cold issue believe it or not but simply a physical exhaustion and dehydration issue of climbers strung out in difficult conditions. Double boots are a reasonable insurance policy to avoid a cold injury when you are dehydrated and exhausted and still having to keep moving. Sounds pretty much like any worthwhile alpine climb doesn't it?

While expensive, quality double boots are nothing compared to the price of what even a short stint in the hospital from frostbite and the resulting down time will cost you long term. Not to mention the resulting cold sensitivity that will follow you well into the future. The result of a serious case of frostbite is you'll either stop climbing in cold weather or you'll buy double boots after the first incident. My suggestion is buy the double boots up-front and save yourself the worry and pain.

A good percentage of the time you'll get away with it. In Canada these days most climbers won't go out if the temps drop below -15C. That is up from the old norm of -30C as the temps we generally called it off. One of the reasons is most boots are not comfortable climbing below -15C unless they are double boots. 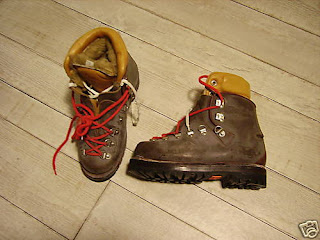 The other important reason to invest in double boots is the amount of time you can comfortably spend out in a cold, harsh environment. No they aren't fun to walk in or climb difficult mixed terrain in. But both can be done adroitly with a little practice. You might find they climb ice better than your single boots in fact. On moderate, long, ice routes, most will appreciate the added support and calf relief of a good double boot. The most important reason to look at a double boot is the ability to keep the liners unthawed and warm over night and if required dry the inner out in your sleeping bag. If things really go to shit and you have an open bivy the fastest way to thrash your feet is to be laced into a tight pair of single boots. Better yet on a open bivy you can loosen a dbl boot a bit, gain some warmth usually by doing so, and still keep your 'pons bolted on the boot and not worry about loosing gear. It is a big advantage if actually required.  Getting your steel crampons off your boots or better yet your boots off your feet is alwasy a better and warmer over all option.

The advantages of a double boot are significant to keeping your toes and feet in good health. The down side is first the expense, and then the ability to climb difficult ground in them. That can be over come with time, by climbing more in your dbl boots. Lastly the bulk and weight. The newest boots are getting better.  The Scarpa 6000 and La Sportiva Spantik are both warm, light and climb well.  Worth the added effort to climb in doubles unless you feel like the risk of damaged feet is lower than I do. 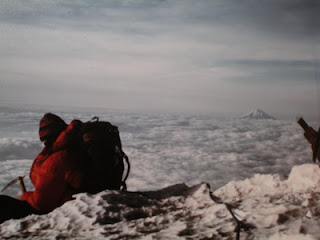 Some will wonder about the Batura and Phantom Guide style of boots (single boots with attached "supergators") as a less expensive (if  $500+ is less expensive) option to a true double boot. This style of boot has two design features that limit their use in similar conditions. They are both very difficult to dry out and keep unthawed on over night or longer trips. And the ankles are generally a lot softer and more flexible than a true double boot. So you lose the extra ankle and calf support as well. My take having used a Batura for a few years is they are good one day boots on cold days but I would never take them out over night intentionally. Each style of boot has a place. Just don't trust the advertising to help you decide when and what is right for you.

Not so today. And because of it I am seeing and hearing of frost bite injuries again outside of the greater ranges....which had been, until just very recently, a thing of the past.
One of my litmus tests for winter climbing partners, 30 years ago and again now is, "do they own double boots?" It doesn't mean that you use double boots on every winter climb.
But if they do, I can generally count on the fact they take their own survival and climbing seriously. That is usually because of hard won experience in really cold weather conditions. So I can worry less about them getting a cold injury and both of us staying healthy on our adventures. And just as often the owner of a pair of double boots is likely to value his partner more than some one with less experience would. Surprised? You shouldn't be. It is all in the details.

If you plan to go BIG and go LIGHT....the place not to short yourself on gear is your boots...go BIG there first!

More on the end result of "minor" frostbite. 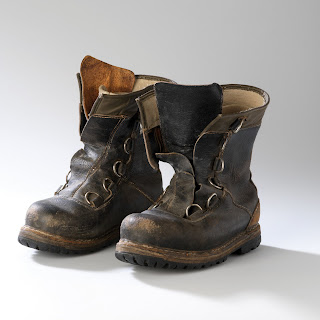 By comparison a light weight double boot for their time.  Something the first Kolflachs were.  And the recent TLT5 hinted at  prior to the full blown ski boot with the introduction of  TLT6.

The climbing world still waits for the super light technical double boot to catch up with the modern technology available.


Hermann Buhl (September 21, 1924 – June 27, 1957) is considered one of the best post-World War II Austrian climbers and one of the best climbers of all time. He was particularly innovative in applying alpine style to Himalayan climbing. His accomplishments include:

Buhl is the only mountaineer to have made the first ascent of an eight-thousander solo. Just a few weeks after the successful first ascent of Broad Peak (with Fritz Wintersteller and Marcus Schmuck), Buhl and Kurt Diemberger made an attempt on nearby, unclimbed Chogolisa peak (7654 m) in alpine style. Buhl died when he fell through a cornice on the southeast ridge near the summit of Chogolisa. His body was never found.

"Buhl was very lucky on Nanga Parbat, escaping with just a few frostbitten toes. This story reflects Buhl's style of climbing; totally focused and by taking enormous risks he often succeeded where others failed." 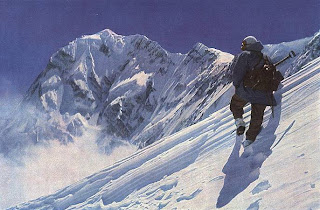 Do you have any experience using vapor barrier liner socks with a single boot (phantom guide style) in winter? This is one option I've been considering for myself, I think I would limit them to single overnighters though and not multi-day trips.
-Kevin

Problem with anything warmer is trench foot becomes an issue quickly. When I get some time this Fall I'll write about vbls in more detail. My quick take? Better system for a sleeping bag than a climbing boot.

Second your thinking. My very first ice climbing outing was a class with a school in North Conway, NH. First day out was quite moderate temps. Second day the high was 12F. I was fortunate to have nabbed a pair of Makalus as my rental boots. My feet stayed warm all day. The other student climbed in Super Guides, and had seriously cold feet by pitch 3.

For years I climbed ice in plastics. The past few years I've switched to Nepal Extremes for ice cragging. I would never use them for an outing that I thought might keep me out overnight. The Nepals are nimble and light(er), but lack the reserves of warmth.

Couple of comments. I certainly agree that hydration status and exhaustion play a role in frostbite. But it's important to note that these two conditions often go hand in hand with an epic involving unplanned bivies. I think it's a combination of conditions that leads to frozen piggies in this setting.

Second, I have to disagree that temps don't play a big role in the problem. I have witnessed plenty of FB in well-rested climbers and skiers out for a day after sleeping in their beds at home. The only factors in play here are temperature and enough distraction to fail to notice whats taking place inside your boots (double plastic boots, I might add). I have seen this in Colorado and the Tetons, both ranges known for chilly mid-winter days.

Third, the sure to be great Alaskan alpinist, Matt Porter, who prematurely met his maker in a goddamn car accident back in 2000(?), always carried down booties when he climbed. He felt they were the best insurance for his toes should the dreaded open bivy happen on one of his typical Alaskan sufferfests. They weigh nearly nothing and easily compress into the corner of your ruck. Sound advice from this young gun.

I always thought of down booties as a luxury item, but you got a good idea there about the extra insurance. Just a question though, do you know if he sized them to go over his boots? That may not even be possible I suppose, just wondering.....

Normal sizing...good to use in the bag as well. Mine are synthetic and not down. Good insurance and nice for the feet when you can get the boots off.