For me a dozen or so really note worthy new items at OR related to alpine climbing is a huge success.

No ice or  sheep in sight, so many of the great minds in the industry compare notes @ the RAB booth ;-) 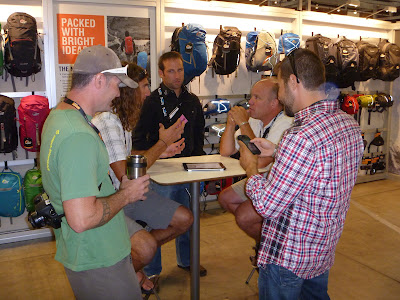 BD has a new lwt helmet which I really liked.  New biners again and of course some great cams.  More on all of this shortly.  The new BD Vapor helmet is a stand out. 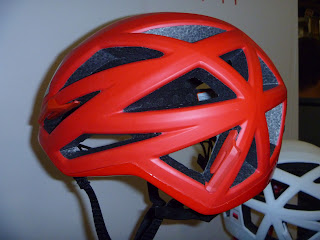 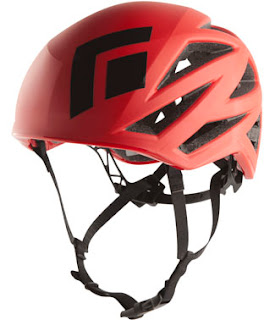 But the ugly award goes to Petzl.  I happen to like ugly so the new Petzl Sirocco climbing helmet @ just 165 grams was a HUGE hit with me.   More to come but super durable, and super protection at 165g!  I don't give a chit how it looks.  And $100 full retail!   This will be my new lid as soon as they are available. 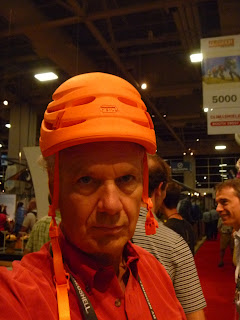 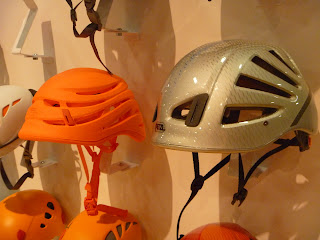 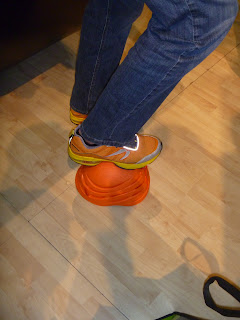 The new Sirocco is TOUGH! 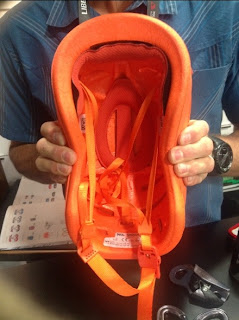 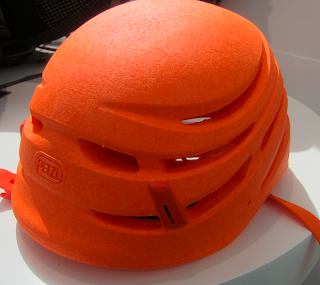 Ice tools?  I have now actually seen the newest lwt Petzl hammer for the Nomic.  Nice bit of kit.  But from that I have decided to do a new run of the Cold Thistle hammers asap.   There is easily room for both imo.  As I mention earlier the Lynx  crampon is being shipped to the NA market again.  They simply over sold last year's production.  It has been a very popular crampon for good reason. 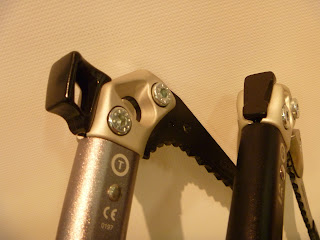 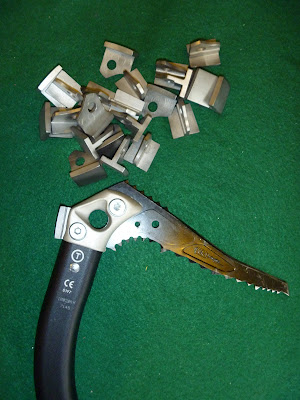 NWAlpine's new wind shirt made of Dyneema.
I have a sample I will be testing but Wild Snow as a write up on line now.
And more Neoshell kit that I am really excited about!  Still under wraps at the moment. 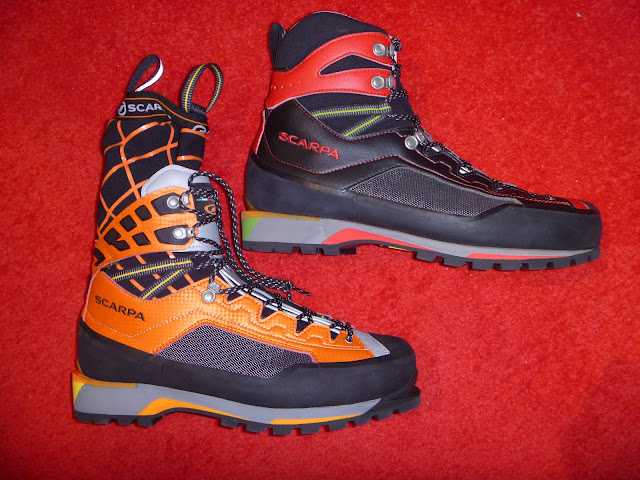 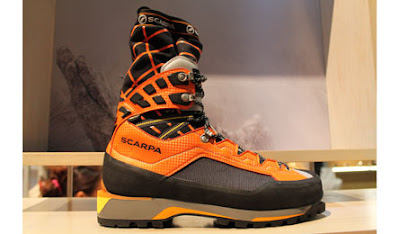 Here is one of the best from this year's show.  Another lwt Rebel from Scarpa.   More to come asap.

I've been climbing in the Rebel the last couple of months and really like it.  An in depth review on that boot is coming soon.  However the new Rebel Ultra is going to be a huge success imo.    I am chopping at the bit to make the Phantom Ultra (my favorite ice boot currently)  and Rebel Ultra comparison for ice climbing.   These things should really rock.  I believe I first saw a pair of these on Ueli Steck climbing the Dru Coulior last fall...but no one would comment past, "that shoe only exists on the feet of Ueli Steck".    Guess that might have been true last fall...it is not now and will be availabel to the public next spring.  A fully featured fruit boot we can take into the mountains?   Some one is getting the message, finally!   Very exciting boot imo!! 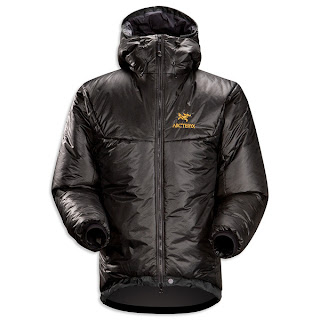 Arcteryx?   Official word on the Duelly from the guy actually making the changes?  Not going to down insulation and not going away.  Just a slight revamp of the pattern, so we'll have a better fit.   Dually will be back again in the fall line up.  Some very cool new clothing combos I had not seen there in the Gamma line up though.  Damn!  Another I want!  And the possibility of some super suggestions coming directly from the Arcteryx designers on the combos and layering systems they use personally.

Another big one for me is the newest food being offered.  Gu has/needs some serious competition I think for climbing calories.

Three new food companies (and their food products) that impressed me were www.Bridgford.com, Hotcan.com (hot drinks and soup available now as well) and www.aclimate.com  All are worth checking out.  And I'll be writing more on then asap.

Hopefully we'll get a few more things to test in the near future from Millet, Mammut, Mountain Hardware and RAB that I am really interested in  for alpine climbing.

Down the road?   For alpine climbers there is James Bond kind of stuff being talked about behind closed doors at every level.   Gear that is yet beyond my imagination.

I've been looking at sun glasses again and will have a review of several of my personal picks from a huge fields everyone seems to be playing in these days.

I'll add more as I unpack and get to my pictures and notes.

Am I missing the part where Scarpa actually tries to sell these new boots? The Rebel has been on my pro account for months and I ordered Trango's because there are almost no reviews.

The new Rebel just became available at retail last month. I haven't had the time to write them up and wanted to climb a good bit in them before I did. Climbing is done now. I just need to write the review. I really like the boot FWIW. The newest Rebel Ultra I am so excited about here won't be available until next spring. Remember all the stuff @ the OR shows are months (6) away from being at your local retail stores.

Both are worth the wait imo.

do you know if the lynx is being shipped to the uk also..?
ive just tried some darts on my scarpa phantom 6000's after trying loads of crampons on and the fit is perfect in every way (on my size 43's)i remember you saying they didnt fit your size too well,so im wondering if the iynx is as godd fit,but there havent been any in the uk for ages..
also i want some of your hammers as soon as you make some more,could of done with some for next month..
cheers cliff...

The Lynx is shipping currently world wide. Everyone should see them again shortly.

The new Sirocco? Well, at least you said it; you like ugly. You know, you have become somewhat famous (infamous?), and one of the things you are famous for is the layering style of "many hoods." I do hope that if you insist on buying a Sirroco, you keep it well hidden beneath those hood layers (or at least concealed in the retractable helmet lid of your Blue Ice climbing pack. I know, I know, it's light, durable, and so on...but, Dane! Really! Have some dignity!

(Glad to have you back posting...hope you had a great summer)

FWIW Ive been climbing/hiking in the Rebel Gtx for the last month and absolutely love them. Best rock climbing fit of any boot I've worn and takes long approaches like trail runners (well almost). Did they add any insulation to the Ultra? The Rebel Gtx wouldn't be much fun to stand around in below 20 f.

Thanks Bruno...I was a little concerned because the Sirocco will take a BIG hood to hide :)

Ben? No additional insulation. You'll need to climb fast! The guys at Scarpa assured me they will NOT be as warm as the Phantom Ultra which is suppose to have zero insulation as well. But I use them (Phantom Ultra) every where "normal" in mid winter temps, from the Midi to the Canadian Rockies. @ 0-20F they wouldn't be the boot I'd want to be in. But -10C? Sure.

Have you tried the Maverick? What's the difference between it and the Rebel?

Haven't used the Maverick. Leather as opposed to a fabric boot like the Rebel. Rebel was available first.

Interested to hear more about your conversation with the Arc'Teryx team. Also excited about these new boots--we'll see if they fit my feet, or if they ideas circulate other manufacturers' designs as well--seeing some great thoughts and I'm looking forward to testing how they translate to the practice of alpinism.

Funny isn't it? I see a linear progression of all the gear and wonder how "it" gets stuck along the way. May be I am just being allowed to see more behind the scenes as "cold thistle" but my impression is the actual players are getting more involved in design efforts knowing what the end use will be. But have to think that the amount of people playing (and two international wars) and there for money involved is enabling more long term vision and rapid change.

How stiff is the Rebels sole compared to the Trango Extreme?

Rebel is a Scarpa product. Scarpa seems headed to the "softer" mid sole arena. La Sportiva seems to like a rigid mid sole for technical boots. The Trango Extreme is a good example of that technology.

Not standing around much seems to be the thing these days...pretty stoked on the Ultra though esp given the absolute awesomeness of the Gtx carbon.

The sole on the Carbon is def stiffer than the LS trango S (or the Scarpa Charmoz) but not quite as stiff as the LS extreme, although close. Comfortable to walk in for sure but with a ton of edging ability and support for front pointing. Have yet to try them with a rigid crampon but excellent with Grivel AT and flex bar. Hard to describe the fit of the boot, it's really different than anything I've had/tried, light and close, great heel lock but roomy width in the toes (not so much in length). I guess really like a fruit bootwith a bit more padding/support. Funny to look at too, like a combat boot meets a tennis shoe. Biggest advantage imo is they're ridiculously light and rock climb really well.

Any news when the Dually is coming back?? The only answer I am getting from Arc is that we dont currently have it to purchase.

Duelly is suppose to be available again the fall of 2013. Much improved, still synthetic and well worth the wait I suspect. They are makeing two insulated jackets now that easily replace the original and perform better. So the new Dually should be pretty slick for the intended purpose.