When I start thinking I know what I am doing I usually get a lesson in humility.

Umbilicals?  To connect the umbilical to the tools we have mini lockers, flat steel wire gates and a host of do-it-yourself solutions with all offer varying amounts of success.  How hard does it really need to be?  Not very it seems.  For the home made ones just tie a big loop in the end and do the same.  Easy on and off for the alpine where you may want to remove the umbilical all together.  Thanks Jim for pointing out that obvious solution to my my overly jaded imagination. 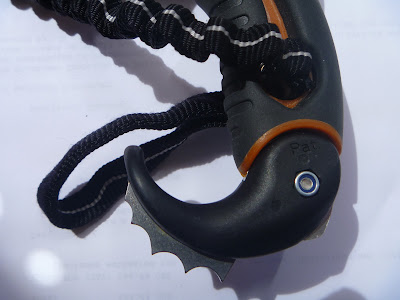 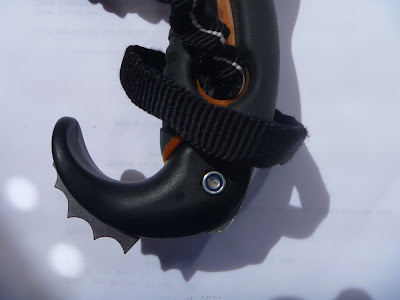 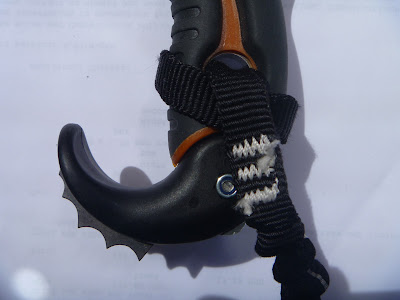 Boots that don't fit perfectly?  Feet a little different in size?  Not unusual for most folks.

How about using different thickness sock on each foot?   It might just be the simple fix you require to get a better fit.  Not one I have needed but so simple when it was pointed out to me I had to say, "duuuu, of course!" It is at least worth a try.  Thanks for that idea! 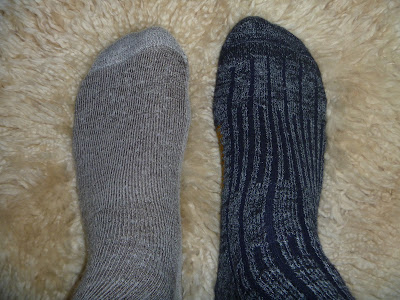 Another one that seemed to escape me and most of my climbing mates.  Sharpening tools?  For most things including vertical ice and the majority of alpine mixed a razor sharp pick isn't required. In fact it is just a waste of good steel (and your hard earned cash) to always be sharpening and resharpening your picks.

I know, BTDT myself on numerous occasions.  And until now I am generally loath to go on anything I think is difficult without a set of "properly sharpened" picks.  This spring I decided to see just how much difference it really makes.  Short of super cold  or old hard and brittle ice I suspect it doesn't matter much.  Now I intentionally sharpen my picks differently.

I think the ability to hook the tools easily is equally important as getting the initial stick.
With the best of the new tools hooking is easy and secure.  Which allows us to worry less about the condition of the pick's tip.  Much as we want to think it really does and I have been convinced it does for years. 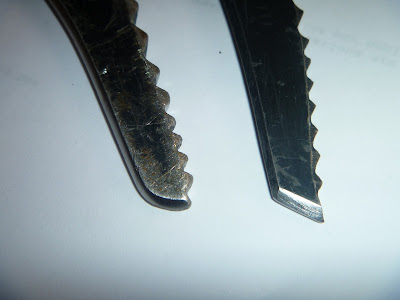 
The difference in how the picks actually climb in the majority of terrain I use them on is nil. 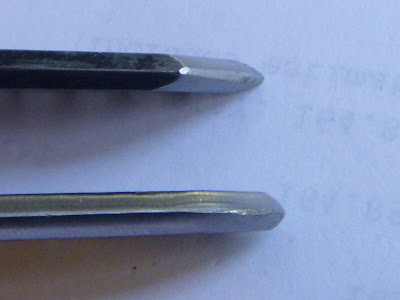 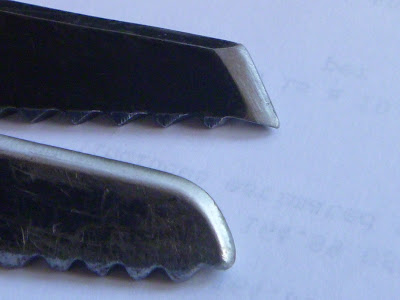 To make a point the two  sets of picks below started out new and got some use. 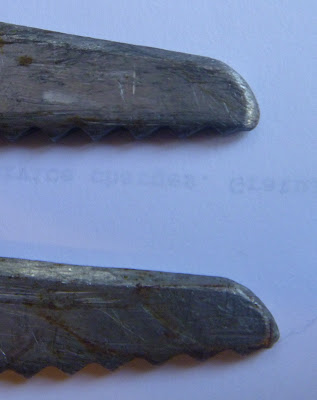 The pair above was used on the first ascent of  Dracula,  Mt Foraker. 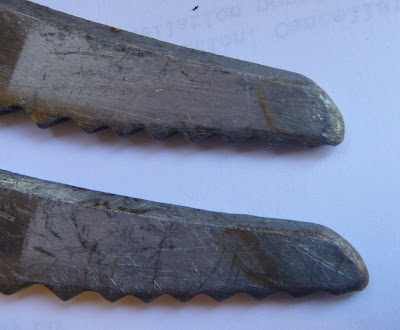 This pair was used on a solo ascent of the Cassin, Denali


As I said unless it is really hard and cold or  just old ice the pick can be pretty well worn and still very usable.  More so than you might first think.  Certainly on a lot of the mixed we do by simply hooking you don't need a razor's edge on your pick.  The first time you miss judge a placement and slam the pick into rock you'll end up with a dull edge anyway.  The cutting edge of a splitting maul will last a lot longer than that of a scalpel.  Each has their own place in the tool box.  Best to know which you need for your specific job.

I still have picks I haven't touched with a file that get used on fat Canadian ice.  Going a full season there without intentionally hitting rock is not unusual.   They start out sharp from the factory and stay that way if I pay attention.   I also have the pair of picks I climbed on in Chamonix last winter.  Down into the teeth on those simply from wear on the hard granite and old black gully ice there.   One is the rounded and shortened pick seen in the first picture.  The pair look remarkably the same. 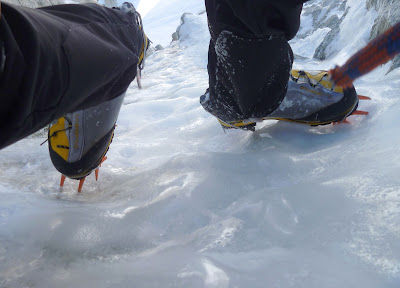 I used that pair of picks on several pure ice climbs this spring including the scariest lead I have been on in a while.  Sticks are easy in the spring time slush :)   The shape of my picks never once entered my mind. 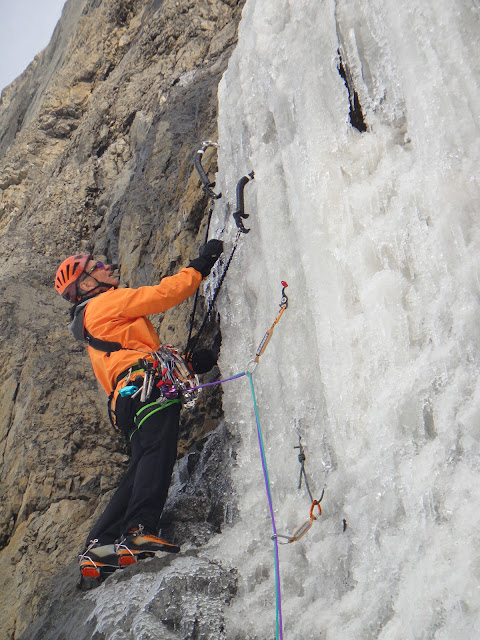 Good stuff. The sock idea is great--so simple! For a few years, I have just been leaving my picks alone, or simply "touching up" the worst spots, basically leaving them as they are. They definitely last longer with a practical and functional edge that way. I also like the "girth-hitched" leash system. I would say that the Blue Ice leashes are particularly good for this, because the loops near the tool are relatively large. You can easily girth hitch one handle, and then girth hitch the other, passing the whole tool through the loop...hard to explain, easy to do. In any case, tips like this are great. Efficient climbing is composed of these small acts. All the best.

Joe Szot, who is one of the best ice climbers i have ever seen climber with the shitiest picks I've ever seen. He had one stock Nomic pick that was trashed and one Camp Cassin pick that was modded to fit on his Nomic. They had completely different pick angles and everything. his sharpening style looked more like a flat head screw driver than anything. He looked at my Ergo picks with what he called a "Black Diamond style" sharpening and said that just didn't work for him. He explained to me that he felt more steel in the ice gave him more friction and better sticks with less penetration. I watched him lead a WI4+ pitch with about 80% one swing sticks, no effort at all on his part. I though it was really good ice as i watched him, i ended up swinging 4 times per stick....