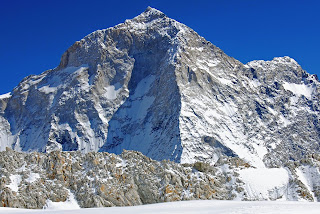 http://www.mountainsoftravelphotos.com/Makalu/Main.html
In the spring of 1977 John Roskelly and I left Spokane WA to attempt the West Pillar of Makalu with the first permission for a two person attempt on a Nepalese 8K meter peak.  Luckily for both of us in retrospect,  John became severely ill on the walk in and our trip ended as a complete failure, still days from the mountain.

A 4 person Spokane team, again including John, returned to Makalu in 1980.  John summitted alone on that trip but with the support of our friends Jim States, Chris Kopczyski and Kim Momb.  The climb was made without Sherpa support.

But John's and my short walk was a life changing event for me.

I had just started guiding in the NW a few years earlier and knew some of the the hazards even small peaks offer.  The size, elevation and remoteness of the big Himalayan peaks was truly awe inspiring in 1977 and continue to be so now.

I was not comfortable in 1977 even paying porters to carry my gear into the mountains.  I could not in good conscious ask anyone to climb a mountain with me simply for a salary.  Even if that was likely the only salary available.  I did not like the economic realities of the relationship and did not want to be a part of it.

I have no clue how it is now but there was a pretty stark difference between the standard of living we enjoyed in the USA and the gear we would use compared to what the standard of living was in Nepal and the gear (which would be part of their salary) we would offer our porters or climbing Sherpas.    I have not gone back to climb in Nepal but even in 1977 I was uncomfortable asking anyone else to risk their life to come out and "play with me".

Enter Joe Puryear decades later.  I admired Joe's Alaska climbs and we exchanged a few emails on routes he had done there. (there were few he hadn't)  Joe was always gracious and gave freely of his time to complete strangers like myself. 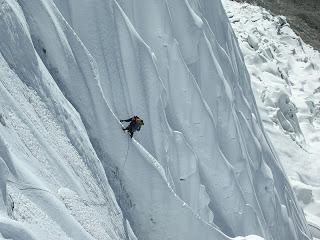 You couldn't help but also notice on Joe's web site his climbing in Nepal and his obvious involvement in the Sherpa community.

I am sure there were others previous to Joe's and David's trips doing something similar but they certainly inspired me by their actions.  They seemed to be involved in Nepal and the people not  just just taking advantage of  situation economically and getting to "climb on some one else's back".   I liked what I saw and admired them for it.

If you look at Joe's web pages one of his sponsors is a company called Sherpa Adventure Gear.

To be honest until yesterday I thought Sherpa Adventure Gear was a small company, based in Nepal.  Likely Kathmandu, and  making the odd piece of funky wool bits.  Joe's trade mark hats for example :)    I figured Joe was just supporting a local cause for the best of reasons.    Nothing could have been farther from the truth on the "funky wool bits".   But I have no doubt Joe was "supporting a good cause for the best of reasons", just as Sherpa Adventure Gear was supporting Joe's avocation.   By all accounts it was a close and supportive relationship from both sides.

Here is the company line:

"Sherpa Adventure Gear was inspired by the many unsung Sherpa heroes of Everest. From the start, our goal has been to create outstanding outdoor clothing and gear you can depend on. But more than this, we want to show you a glimpse of the Sherpa culture and way of life. And at the same time support our Sherpa community back home. Whether you are looking for gear on your next adventure, or just want to learn more about the Sherpa people, you can discover all this in our website."

Surprisingly Sherpa Adventure Gear is actually based in Renton Wa.  Owned and staffed by Sherpa family members for the most part.  But make no mistake this isn't a simple "mom and pop" operation.   They have a national and international dealer network as well as several successful retail stores in Nepal.  Sherpa Adventure Gear is serious player in active outdoor wear world wide.  The majority of their products are sewn in Nepal with a smaller percentage in China at the moment.  Mr. Tashi Sherpa and his immediate family are the driving force here and in Nepal.

As a small manufacture myself I have begun to look at what I make, how that effects others, the products useful life span and how my products are recycled.

It makes me more aware of what others are doing in their own communities and why.

The climbing community, especially the alpine climbing community is very small.  And it hasn't changed much in the decades I have been involved with it..  We are in fact a large family.   Death is a fact in alpine climbing.  Joe Puryear's death last year effected many climbers, locally and Internationally.    It will happen again...and again.  It is part of our game.

This is a hard blog to write.  Too many serious issues that most (including myself) would rather ignore.  So I'll stop there.

I wouldn't have brought up Sherpa Adventure Gear here if I didn't think they were making some incredible products for hard alpine climbing, no matter what their politics were.  But their politics stood out to me.  I was introduced to the company yesterday and bought a couple of their pieces for my own use that I will review in the blog.  Just wanted to give a heads up for a business and business model I admire in many ways.

Nice one Dane,
I have a few of there things myself including a crafty primaloft insulated hat with a little visor. All in all the products are well made and last prtty good. I even once saw there mountain backpacks and got to try em on. Nice fit, but a bit heavy. I've heard they want to start making tents and better bags in the future. Saw that once in there catalogue I think.

Where did you manage to buy their stuff? I can only find most of it a few places on the web on clearance and have been wondering if the company is going under. Do they have a local dealer/store that stocks most of the line?

I like the look of a lot of their gear and am in the market for a thick primaloft coat to fit a small woman and would like to find the raajen in a small enough size.

I was actually at their warehouse in Renton yesterday. They may regret it, but I suspect a phone call to 425-251-0760 will get you squared away. Let them know about Cold Thistle :) Pro Mtn Sports in Seattle should be able to get anything for you as well. Jim's a great guy and will treta you well.

I bought my wife a Mantra jacket yesterday which she just loves. And the men's Himal climbing pant is one of the best sof shells available imo...and a screaming deal at $120 FULL retail!

Good blog, the issue of paying someone to carry your gear always seemed so wrong to me as well.

I've always liked Sherpa Adventure Gear, the stuff is easily on par with the regular name brands, but it is much much less expensive. Recreation Outlet in Utah sells tons of their stuff and my girlfriend refuses to wear anything other brands of outdoor gear. The way it is sold at that store, it definitely doesn't seem like they are in any danger of going out of business. I think you just have to find one of the few retailers who carry it.

Their gear is very functional, they use very nice fabrics (lots of shoellerish stuff), and overall its just cool, especially considering that it benefits sherpas themselves. :)

Hi again Dane! Just got back from Aconcagua and wanted to post my "THANK YOU" for the recommendation of La Sportiva Baruntses. I have never had such a comfortable boots for 6000m in my life, not a single blister, easy to fit and put, warm inner boot, tough and solid to use on rocky terrain.
I have spent the last 28 days above 4000m climbing many mountains, unfortunately the weather in Aconcagua wasn't very good and I couldn't summit since I tried the normal route alone in a snowy day. My legs got tired of opening the trail (knee deep) @ 6600m.
As I take my Baruntses out of the duffel bag please receive a warm thank you again and we'll keep in touch around here :)
Abrazo de cumbre,

Nice detailed post on Sherpa Adventure Gears. You mentioned a descriptive view on this company situated in Nepal which is producing adventure gears and very much popular for their quality of products.