Dave McLeod and Andy Turner repeated the Smith- Marshall routes from that famous week in 1960 this year. More of Andy on the first ascent of "The Secret". Same climb Ueli flashes in the Petzl video and one of the most difficult modern Scottish test pieces. A little love for the Black Diamond fans in there as well :) There are 4 of the Smith-Marshall routes on videos by Hot Aches Productions @ you-tube with a full length feature coming in the fall. Observatory Buttress, The Great Chimney, Minus 3 and Pigott's are all on you-tube. Worth a look if you want to see what the "state of the art" on mixed, a full fifty years ago, in 1960.

"In one legendary week on Ben Nevis in 1960 Jimmy Marshall and Robin Smith advanced Scottish winter climbing a full ten years. On consecutive days they climbed six first winter ascents, including the mini Alpine-route Orion Face Direct (V, 5), while also making the second ascent of Point Five Gully (V, 5) for good measure. The fact they achieved all this by cutting steps up the snow and ice appears, from the remove of the 21st century, to be almost unbelievable. Marshall’s skill was such that he could lead routes almost faster than some of his talented seconds could follow."


Jimmy Marshall the winter of 2010 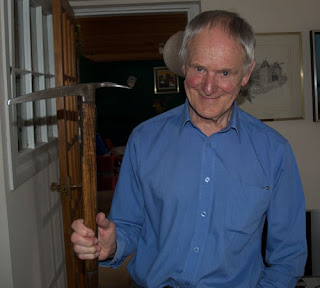 
Andy Turner on "The Secret"

http://www.youtube.com/watch?v=H5BwTHyMJGs&feature=player-Rew
Posted by Dane at 11:06 AM