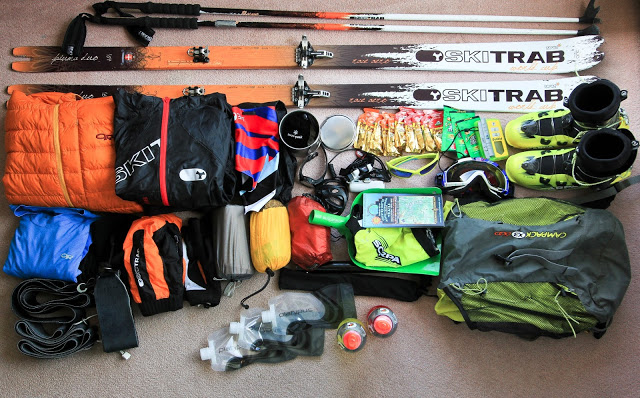 photo stolen directly off Andy's web site :)  More here on what the gear was for:
http://slcsherpa.blogspot.com/2011/12/light-and-fast-ski-mountaineering-part_12.html
I've been rather manic the last week or so.  Not able to get out.  But knowing there is an end to that nonsense.  I start devouring the Internet chatter and searching things that interests me at the moment.  That will be ice soon enough.   At the moment it is skiing.  Primarily trying to get the gear I want for this winter before it is sold out and unobtainable for another season.  2 pair of skis and 2 pair of binding to go yet.

Although 2 years old now, this a good piece I found and read while dicking around in my manic phase today.  In this game everyone seems to have an AHA MOMENT.

Mine was the ski from the top of the Grand Montets tele over to the base of les Droites North face 2 months after Andy wrote this.  Took me another couple of months to wrap my head around $1000 ski boots.  But I have not looked back.  More like damn the torpedos and full speed ahead!  And you thought race bike and car parts were expensive?

"Everyone does it. Bloggers, or as I prefer, those that keep "online journals", always seem to give unsolicited advice about how to go faster, be more efficient, or do things better. After a 3 hour aggressive conversation with a couple friends about training methods yesterday, I decided to put down my thoughts in a multi part series on everything from training, gear, clothing, partners, etc."

"They showed up on skinny skis and funny boots (F1s and early model Dynafit race boots). From the gun, I had trouble keeping up - even on the flats. By the time I landed on Box Elder's panoramic summit, Sam had been waiting for days and the other guys were half way up the Pfeiff. I was utterly blown."