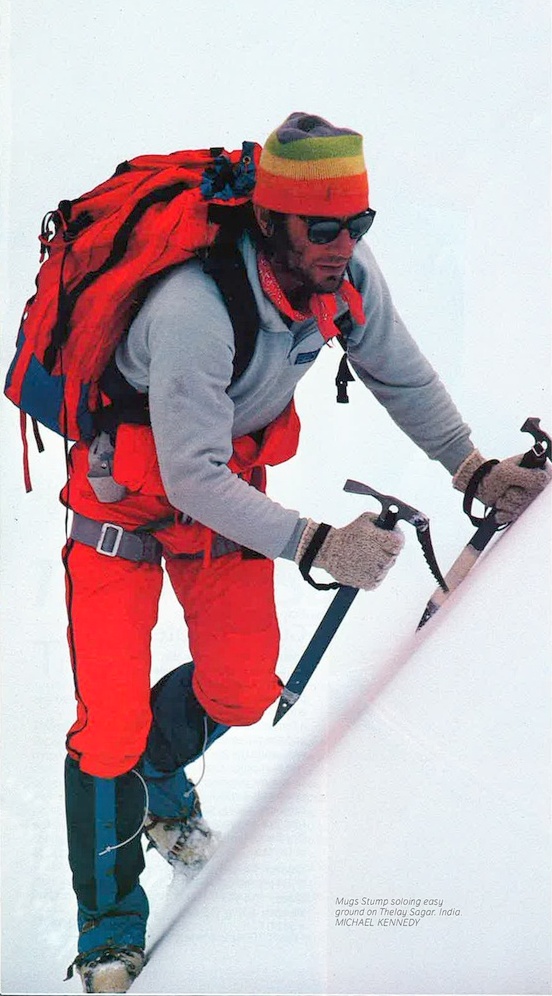 
I had just returned from the head.  There were several tables of us crowded around in the Road House that had just gotten off Denali after a big storm cycle went through.   Everyone at the table had been stuck at 17K for a few days.  Mugs and I had dug out each others tents a few times as the clients stayed in doors.   We were all happy, hungry and glad to be out of the mountains (at least I was anyway).

I sat back down and found my pork chop missing along with most of my mashed potatoes.  When my jaw dropped opened and my temper started to flare, Mugs and the rest of the table had a deep and well deserved laugh at my expense.  Great way to finally relax a bit, get warm and drink a beer or two.

I didn't have enough money in my pocket to buy another dinner. May  be an extra beer.   Of course they had already ordered and paid for one of both for me.  And I quickly realised how much of a dick I was being but not quickly enough.   Mugs could be hilarious in a social setting.  I eventually had a good laugh as well.  Mug's story of the cold on the Moose's Tooth bivy was funny and frightening.  He told us his head went  numb from the cold.  It had me rolling on the tent floor.  "No?  Really?  Your head hu?"   Or maybe it was the whisky.  Likely both.  Great story either way.  I was never sure if he was pulling my leg.  But I didn't think so.  Damn, that would be really, seriously, COLD ;)  Bet he is still laughing about that one!  Yep, "my head went numb!"  May be it was Bridwell's bivy stash that did that?

Hard for me not to remember Mugs and smile when I see a pair of Vuarnets.  Maybe it was the picture above and the Patagonia's Capiline ad.   It is a picture that still defines alpinism for me even today.  And you have to remember Michael Kennedy pulled out a camera to get the shot while soloing as well! 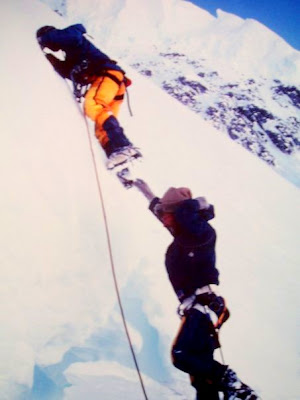 We all went over the 'shrund together when Mugs and Paul Aubry did the Moonflower.  Brad and I failed on our proposed route.  Mugs was wearing Vuarnets in the bright sun that day as well. May, 1981.

Much more about Mugs here:
http://www.thecleanestline.com/2009/02/the-dream-a-journey-of-the-spirit-with-mugs-stump.html

Anyway Vuarnets are a fun memory for me.  Mugs and I would see each other on and off in Alaska every season for a few years.  He introduced me to Wild Things gear and by example, harder climbing than I had ever imagined possible.

Now that I think about it, even Doug Klewin had a pair or two of Vuarnets bitd.  Doug was wearing black framed, Cat Eye, Nuatilux lens Vuarnets on the 1st ascent of the North Buttress of Hunter!  Hard to believe that tiny bit of important NA mountaineering history (trivia)  might have be lost!   :) 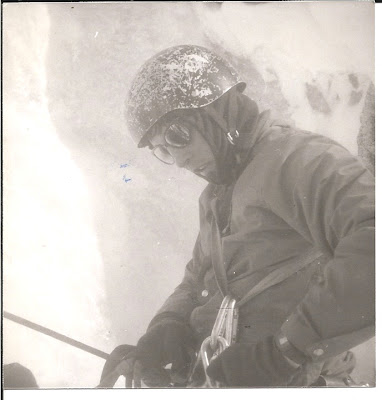 
Anyway when I was doing the sunglass review earlier two things I found very exciting. The first was my original Vuarnets had lasted 35+ years.  They cost $58 at the time, which was a pot full of money for me.  My Galibier Mountain glasses had only been $38 a couple of years earlier.  So the Vuarnets were a big step up for me.   In my mind they were my first piece of  "man jewelry".   Gas was .63 cents a gallon in 1978!   I have broken three frames in those 35 years.  They are easy enough to replace if you have an oven or even boiling water handy.  But my lenses have no scratches and only one tiny pit on one lens from being dropped flat onto fresh pavement from about 6 feet up.  They are the only piece of my original climbing gear I still use.  More importantly one of the few pieces I still really like.  They have been "everywhere" with me climbing.  I had them on for my first 5.10 lead.   And all but one of the walls I did in the Valley.   Most every ice climb I had done in Canada up til 1990 as well.  And with few limitations they are as good as any thing available today I think.  Few would think of a $100 pair of sunglasses as jewelry today.

The second thing I find exciting?  I had looked around and saw Vuarnets selling for anywhere between $200+ and $350.  Crazy money IMO for a retro pair of glasses no matter how good the lens.
Maybe not so much crazy money if I remember how long they have lasted.

But then I found them, where else, but on Ebay.  Direct from France in all styles and lenses and at decent prices.  Nothing over $150 that I actually wanted and most a few bucks less.

For some reason I kept digging around on the Internet and found a US dealer who specialises in repairing vintage Vuarnets and selling parts as well as complete sunglasses for $105 including the shipping.

On a serious note.  The Vaurnet glass lens give excellent sun protection for your eyes.  There are multiple lenses available to fit most every one's needs.   I can attest that all the glass lenses are really tough and durable under hard use conditions.  The original nylon "cat eye" frames are robust and tough.  Most importantly for me is they fold almost flat and are easily carried/stored in a pocket on long mountain trips (like Denali).  Same place modern sunglasses can be bulky and hard to pack and fragile while living in the confines of a tent.

All Vuarnet lenses are made from the finest glass, ground and polished on both sides to ensure distortion free vision, and are heat tempered for impact and scratch resistance.
They meet the most stringent quality control standards and exceed all the performance criteria imposed by European, American and Australian consumer legislation.

The essential lens for mountains activities and at sea. The Skilynx lens blocks nearly all of the violet and blue light, thus reducing glare and eye strain, while allowing more of the yellow-orange-red end of the spectrum to pass through to the eye, enhancing contrast, depth perception and sharpness of vision, making distant objects visually clearer.


This lens benefits from chemical tempering in order to make it secure. Besides the excellent adherence of surface treatments, it benefits from an outstanding longevity.


Each lens is engraved with the letter


Here are the links that I found for Vaurnet.  I have recently ordered from both companies and been happy with their service and products.   Enjoy! 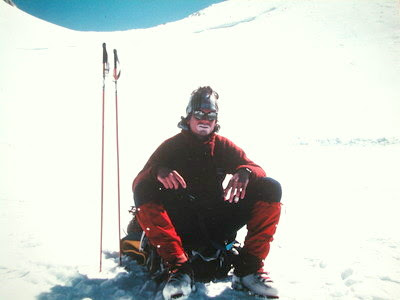 JMARGIFTS.....a USA based company based in Saint Paul, MN.
Repairs, spare parts, and new sunglasses they can build you to your spec/color/lens on some styles, the Cat Eye in particular.   Quick service.  $105.00 for a new set of Cat Eye Skilynx (Mugg's choice in the mountains) or Nautilux including the shipping in the US!
http://www.jmargifts.com/index.htm

SHOPEYEWORLD....a French based company in Courbevoie, France
New glasses and spare frames in most every (all?) original Vaurnet styles.  Decent prices and free shipping if there are multiple purchases at once.  Hit or miss on the  speed of delivery though.  You'll need to be patient.   Typically $150 for the same Cat Eye Skilynx here but frames and some of the other Vuarnet lens tints can be had cheaper or on sale here occasionally.
http://stores.ebay.com/shopeyeworld


I suspect Mugs would get a laugh  out of the fact Vuarnets are still around and that I'm suggesting here they are a good pair of glasses :)  But I am not pulling your leg.   And I'll remember to hang onto my pork chop!
Posted by Dane at 1:34 AM

Great post. Where is your new banner photograph from? Rockies?

I changed the photo again. This one is Carlsberg, late Spring, 2012, in the Rockies as you had guessed.

Hi Dane, just found this post about the Vuarnets....I've just broken the frame on my ski/climb Vuarnets. Shopeyeworld are sending me new frames. How exactly do you pop the lenses out of the broken frames - is it OK to put the whole thing in the oven or boiling water? I don't want to damage my lenses! Any advice would be great, many thanks
Nick

Boiling water is the safest. Getting them out is easy. Boiling water for sure. But I have been using the oven at 220F which works better I think to get them back in and secure.

Shopeyeworld has been awesome to deal with.