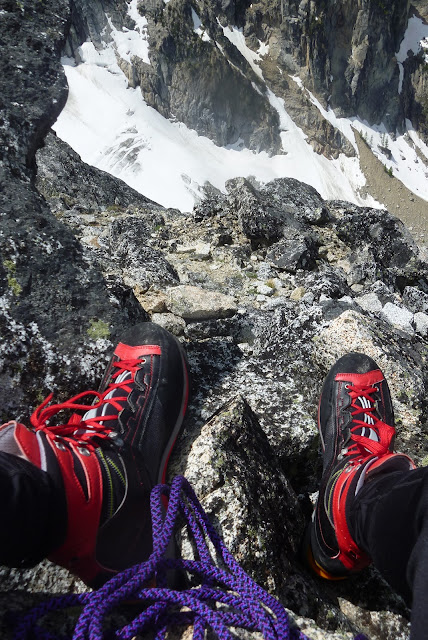 Some good ideas just seem to get reinvented on a regular basis.   Back in the day (bitd)  there were real mtn boots you used on snow and ice.  Then there were lwt "rock" boots you use on rock.....if there was a lot of rock like on El Cap a good pair of shoes could make your life easier.  They still can. 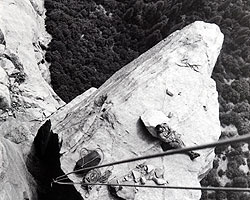 But for most (that rock climb now) rock climbing has changed and a "big shoe" has no place in their closet.  More like a rubber soled slipper is more common backed up by a pair of sticky rubber approach shoes. 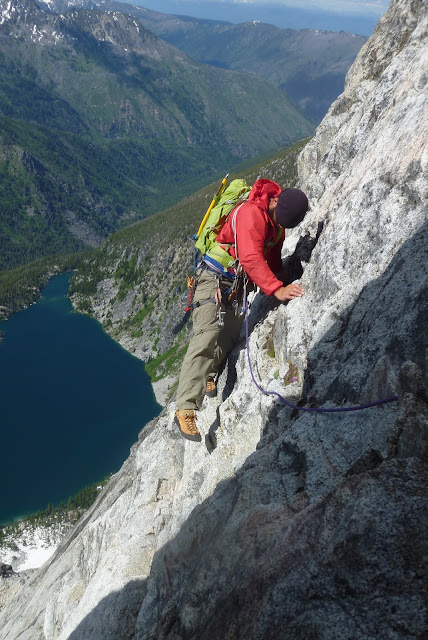 I use the same system (approach shoe/rock shoe) myself a lot of the time.  But it hasn't always been so.   So another trip down memory lane for those that don't know what what "rock boots" really are.  It might just be worth your time. 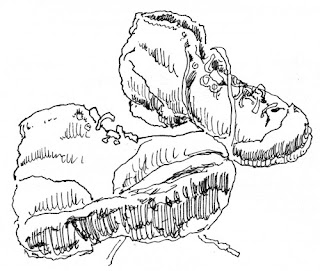 Actually what I would prefer to use would be a single pair of shoes car to car.  But if you look at our  "typical" summer routes here in the Cascades  it makes no sense to me.  It hasn't in decades.   So it is generally runners, rock shoes and maybe even a lwt boot depending on the route and distance to be traveled. 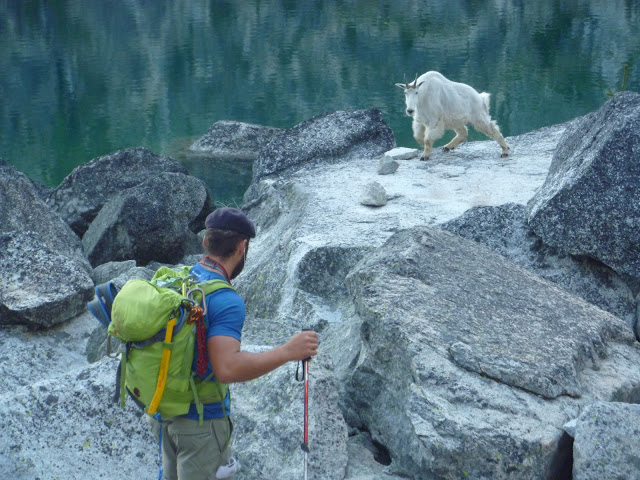 worth a click to see the goat playing in the rocks in this one
Here we might easily have a 10 mile walk on anything from a decent trail to a talus field miles long.  That can easily be followed by a 2000' technical rock climb or more than likely a mixture of crevassed glacier travel, snow fields and maybe a dirty ice gully that is hardly worth taking a tool for but nasty in just a pair of runners.  Much better at times is a decent boot that will take a crampon.
But this is a boot style I have intentionally ignored for years.  I'd rather just wear a lwt runner for anything that requires serious mileage.  Not many boots I want to wear on a 10 mile hike if a decent pair of runners will do.
But if your climb includes technical rock a step or two down from the limits of your skill level, some snow and may be even some moderate ice this is a boot genre worth looking at.  Summer mixed routes in the Canadian Rockies come to mind as do late season climbs on many of the bigger routes in the Cascades.  The best of these boots are easily up to a quick ascent of all the NW volcanos.  As long as you keep them dry with a good gaiter. 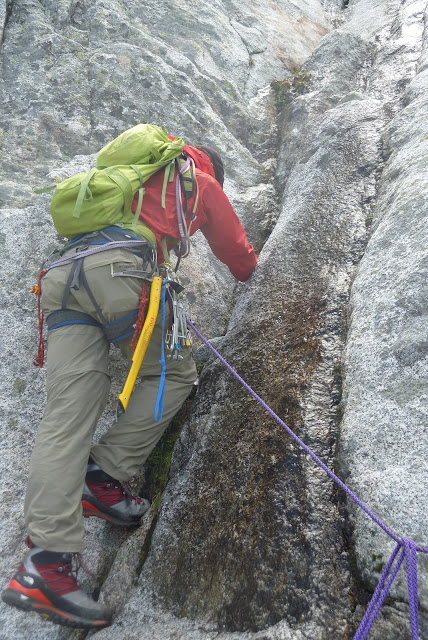 These are the boots in this catagory I have used: 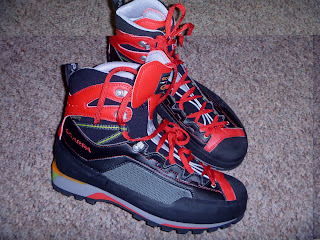 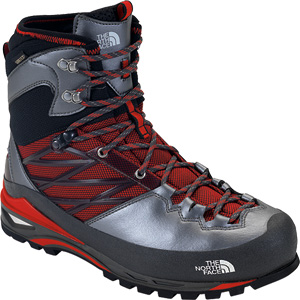 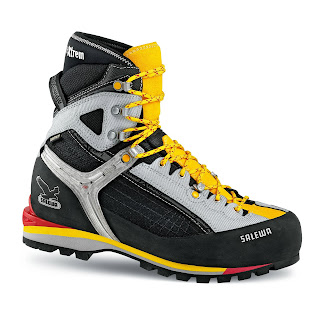 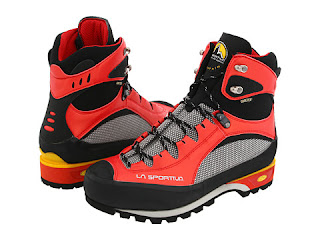 La Sportiva Trango S EVO GTX
One boot, size 45 1#13oz  - 822g
The soles are likely the best available for rock climbing in boots. It is the Vibram® MULAZ. Same sole on my beloved Scarpa Ultras ice boots and half a dozen other pairs of mountain boots like the Trango Extreme Evo. All the soles are closely trimmed and the low profile toes lace low to take every advantage the some what soft and  sticky rubber of the MULAZ. 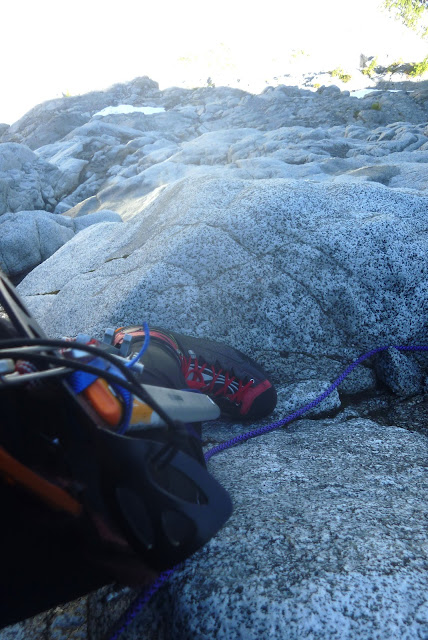 Worth noting that all the boots here are lined with Gortex as well.  This style of boot is so popular in Europe that virtually every serious boot maker has a model that is similar.  Add Goretex, the Mulaz Vibram sole and give the boot a ledge on the back for crampons and seemingly you are in business.

I like the Scarpa because of the weight (but only 3.5oz between them all or 7oz for a pair)  and the extremely low profile fit on my foot.  IMO it is the best @  climbing difficult rock.  But the Trango is by far the most proven of these boots and hard to beat on any terrain the others are useful in.   I also like the Raven because I think it is a bit warmer. It is also the biggest boot by volume. 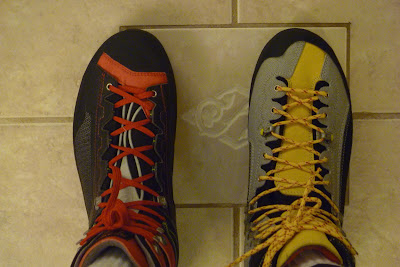 The North Face version only slightly smaller.   I hadn't climbed Liberty Ridge in a while and took the Salewa there last summer.  I failed but not because of my choice in footware.   DC was an easy hike C2C in the Salewa and I had warm, dry feet the entire day.  Nice to be comfy in lwt kicks at the end of the day.  I couldn't complain about the fit in any of these boots.  All are comfortable on my foot.  Which is unusual.  How quickly the soles will break in and start to flex too much?  Anyone's guess.  Although the Rebel does have the only carbon mid sole in the bunch. 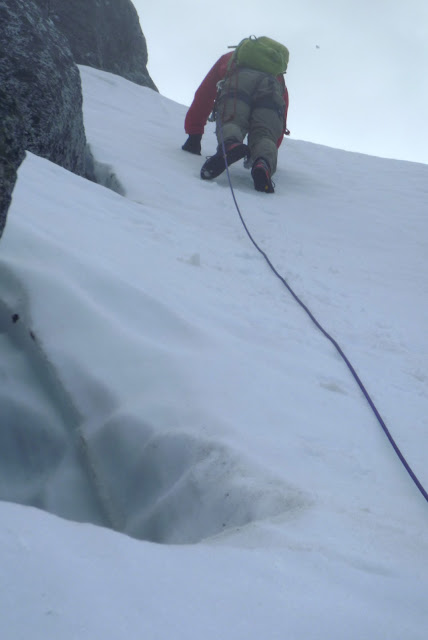 All are warm enough for a "dry" summer ascent of Rainier imo.  And stiff enough to climb snow with out crampons if required.   But they were designed for climbs that will be a mixture of moderate technical rock and moderate snow and ice, not glacial slogs.  It doesn't really matter what I like of the selection here.  teh boots are useless unless they fit YOUR feet.  So if you like the idea of this style of boot, look around.  I suspect one of them will fit you.  If not there are others that are very similar to choose from.

The last pair of boots similar to these I had used were the old blue Galibier Robbin's boots from the '70s and then a Vasque Shoenard.   Any of these are a big step up from those boots and a lot more useful long term I think.  But none of them will rock climb as well either.  But the Scarpa Rebel isn't far off because of the fit, the last of the boot and the carbon mid sole.

Either way any of them add some warmth and comfort on long days and wet conditons in the mountains.. 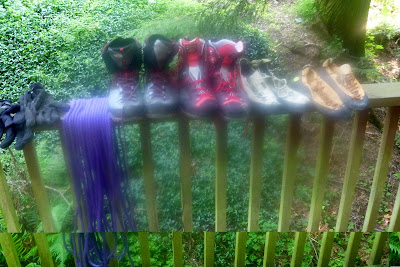 Trying to dry out the gear...including the camera this time.  A beautiful day out on alpine rock but wet and snowy conditions on the route.  Perfect conditions for any of these boots.

I've been using the Scarpa for my Chamonix summer season, and it's perfect for rock heavy summer alpine routes over here. The sole is also a lot more rigid than its competitions, which makes a huge difference. I don't get the rock shoes out before 6a pitches now, which is very appreciable in terms of weight carried and comfort/warmth.

My only worry is durability, I think they will have to be resoled after every season.

Dane, I like your pitch for these boots, and have found exactly what you've said to be true. Also, after seeing how many pairs of light boots you have, it makes me want to see your gear closet.

I use Scarpa Charmoz boots, which are similar to the Rebel, but a little heavier. I like them because they're wide enough to fit my feet, unlike the Trango Evos. I've never been able to wear Sportiva because of this problem. I've used the Charmoz a little bit for climbing in the Rockies, and down to -15 they've been adequate, as long as I wear primaloft socks and gaiters, but I don't think they're going to get much more use this winter. What do you use for climbing mixed and ice in the Rockies during winter? I'm trying to decide between Phantom Guides and Phantom 6000s. Thanks for the feedback in advance.

Hi James, I use several boots for winter ice and mixed. Phantom Ultra is my favorite lwt boot until recently. Phantom Guide is only slightly different and easier to obtain. I also use the newest Batura. Dbl boots are a toss up between the Spantik and the 6000 both with Baruntse liners. Since all of them fit me I am lucky enough to be able to pick and choose depending on the project.

Between the Raven and the Northface, which has the narrower heel? Both the Trango and the Rebel are too narrow for me in the forefoot, but fit me well further back. I need a boot with a wide forefoot and narrower heel. I fit a LS Nepal well.

Also, how rigid are the soles on the Raven and the Northface?

BTW, I have a brand new pair of Rebels in a 43.5 and lightly used pair of red LS Trangos in a 44 for sale if anyone is interested. My email is anthonyrabinowitz at att dot net. I am in Tahoe.

Tony, I would think the Raven would fit you but you need to try them out. No guarantees from me on that one. Scarpa Charmoz might be another good one to look at with a wider for foot..

Where would something like the Boulder X mid GTX fit in this spectrum? Thinking of buying these boots for rough approaches, summer snow and easy climbing.

The boot you are asking about is a best described as an approach shoe not a climbing boot. The Boulder won't take a clip on crampon. No heel ledge. And has a foam mid sole.

Like James i use the Charmoz and like them alot. I think they would be a good option for Tony as I also have a wide forefoot but narrow heel and the Charmoz fit perfect.(surprised to hear the rebels are to narrow).

They have also been great for ice and mixed as my semi-automatic sabers fit them so tight that there is no movement however I tug on them.

Trango S Evo and the Scarpa Charmoz are very, very similar boots. None of the boots listed here are anything I would recommend for ice and mixed with crampons.

All these boots are better used on rock with a bit of snow. You'll want more boot for serious ice and mixed.

I have a pair of Garmont Tower GTX boots which also have the Mulaz Sole. All day comfort - I love them - got a super bargain. I got interested in this type of boot after reading a review of Lowa Vajolet GTX boots by Duane Raleigh. He gives the Lowa's the thumbs up.

I have a pair of Asolo Lothar GVs, which have been sadly discontinued in the US. At the time I purchased them, there was no lighter boot available that still had a heel welt for crampons; mid 600 grams if I remember correctly. I've climbed short sections of mid 5th in them, had long days on high Sierra summer snow and easy glaciers, done long days on early season 3rd to low 5th with light new snow, and hiked as long as 10 miles in a day in them. My foot width is D+, slightly higher than average volume, and these things are stunningly comfortable. I'd buy a second pair if I could find them.

The types of boots being discussed here really excel in the Sierra. No insulation, light, good soles (I have probably four pair of boots with Mulaz; it's great, if not terribly durable). My favorite non-crampon compatible boot is a Salewa. At its time, it too was the lightest available. I also have a new Lowa waiting to be tested.